The venture of Le Franc began in 1995 and now takes a new twist with the release this year of a comprehensive book, i.e. Le Franc: les Monnaies, les Archives. Le Franc, les Archives is a true history book that follows a scientific approach, like an encyclopedia of French modern numismatics. It covers all its aspects: political, economic and social history, regulations, techniques, a description of coin grades as well as prices.

This book is the result of a great deal of work by French and foreign collectors, researchers, numismatists and hobbyists. The project was driven by CGB Numismatique Paris and the association Les Amis du Franc (Philippe Théret, Christophe Charve, Xavier Bourbon, and Franck Perrin, among others). The recent digitalization and exploitation of over 100,000 archive pages revealed a mine of new information, thus giving an exact picture of today’s level of knowledge, which had not been done in such a detailed way for over 100 years. 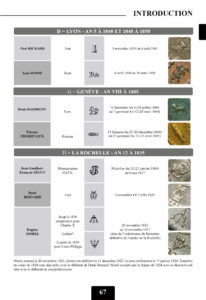 Let’s start with the book’s form! Le Franc: les Monnaies, les Archives is the synthesis of lengthy archive research. It is the fruit of almost 6,000 hours of work. While its main title was kept (Le Franc) the same, its content is significantly different from previous editions. The new “extended A5” format offers additional space to make lots of new data fit in over 1,150 pages. As far as the form is concerned, the usual price tables have been kept although they are far from being the main point of interest of this edition. The new information identified from archive documents is scattered throughout all the chapters. Beforehand, over 100,000 archive pictures were collected from mainly the Paris Mint, la Monnaie de Paris. This book’s particularly rich content includes:

• registers of coin manufacturing and issuances
• registers of coin deliveries
• registers or files gathering correspondence between the French Administration and the mints, the French Minister of Finance and the Administration, the General Engraver and the Administration, etc.
• case files for coin design contests
• files from Chief Executives of the Paris Mint
• archives from General Engravers
• technical files on coin manufacturing
• technical files on chemical experimentation
• minutes on trial and piéfort strikes
• legal documents on the Franc as a currency
• drawings, sketches and designs
• legal documents on counterfeit coins
• organizational records
• metal sourcing, orders, etc.

Thanks to all such digitalized documents, significant discoveries were made for all periods studied. The sources were multiple and very diverse. The Paris Mint archives account for most of them, but other resources were also exploited, i.e. files on Dupré from the Cabinet des médailles of the BnF (French national library), court records relating to the Camélinat trial – which were kept at the History Department of the French Ministry of Defense in Vincennes – archives and coin cabinets of the Musée Carnavalet-Histoire de Paris as well as private archives of engraver Auguste-François Michaut’s descendants. 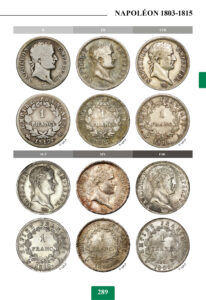 Contrary to previous editions, here the coins are presented per historical period in order to view them in their historical and political context. Each chapter is broken down into three parts. The first one recalls all the monetary events that occurred during the period concerned. This is where the input from the archives may be most noticeable. Among other things, it includes a full list of data about the creation of monetary types and, where applicable, detailed information about the contests for which they were designed. The second part brings together all monetary types sorted per face value. For each type, the reader is provided with information collected from observation or from the archives concerning one specific line or another. In this respect, you will find new input about minting data, the possible existence of variants or, on the contrary, some evidence that such variants do not exist.

Lastly, the third part is dedicated to grading. It contains all the necessary parameters to be taken into account for each condition with the help of coins’ magnified details as well as full pictures. Where different face values or metallic compositions have the same kind of wear, the illustrations for one condition or another are of course pooled together in order to avoid useless repetitions. Almost 150 pages are dedicated to illustrating coin conditions. Grading is a very tricky issue since prices strongly depend on it.

When the number of dies supplied for one production or another was found in the archives, such information is also included. For each type, a table with price lines is also provided. Such price lines are almost the same as those provided in 2016 in the FRANC poche, except for amendments made to correct a few reported errors. However, prices of non-circulating Fifth Republic commemoratives have been updated to a great extent – their last inventory dated back to the FRANC V (2003).

The huge amount of work done using archives enabled the authors to add or take out lines and monetary types. Yet, the subject of Le Franc, les Archives was not to draw up a price guide. Indeed, prices are provided, but rather as a complement to the research work itself. The layout has been fully redesigned and many notes have been added.

Le Franc: les Monnaies, les Archives is a unique book. It is the outcome of work carried out by dozens of people over almost 25 years and is already a major reference book.

For further information go to the website of CGB Numismatique Paris.

The Treasure in the Jam Jar. The Gold of Morez

May, 20. 2021
Rumours about a treasure in the house of the Jobez family had been around for a long time in the village of Morez located in the French Jura. But no one believed it. Now the doubters have been proven wrong: gold coins and bars have brought a windfall to the town.
error: