April 12, 2018 – The Bank of Latvia has issued a silver collector coin “My Latvia”. The coin is dedicated to Latvia’s centenary and the reverse of the coin was designed on the basis of a drawing by the currently 11-year old Elizabete Kandere from Grobina region.

The graphic design of the collector coin was created by artist Sandra Krastina, whereas the plaster model was prepared by artist Janis Strupulis. The coin was struck by Koninklijke Nederlandse Munt (the Netherlands).
The obverse of the coin depicts the large coat of arms of the Republic of Latvia, whereas the reverse features a smiling sun and an inscription “SAULES MUZU LATVIJAI” (May Latvia live and prosper forever). 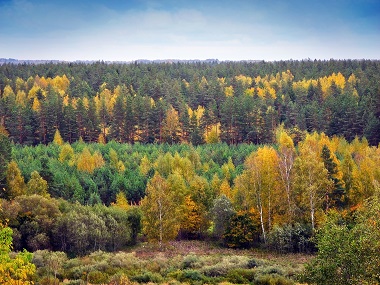 Latvia is rich of trees and beatiful forests. Photo: alinco_fan / CC BY 3.0

The Sun, a source of all life on Earth, a symbol of kindness, the core of human being and its basic value, is the nucleus in numerous Latvian folk songs. The image of the Sun has been extremely inventively interpreted in the drawing by the, at the time, 10-year old schoolgirl, submitted to the children’s open coin design contest recording 6,742 participants, which The Bank of Latvia organised to honour the 100th anniversary of the Republic of Latvia. The contest under the motto “My Latvia” was held over the end of 2016 – the beginning of 2017 period.

More than one thousand proposals were submitted for the competition. Due to subtly nuanced presentations, the works of 19 young authors were selected for awards, while the winner was Elizabete Kandere, a girl from the County of Grobina. It was her drawing of the Sun that was made into the design of the new coin because of its charming optimism and buoyancy.

The collector coin “Mana Latvija” is legal tender in the Republic of Latvia, yet the release of such coins in circulation is highly unlikely, as they are in fact works of art and are in special demand among coin collectors and other interested parties. The maximum mintage of the coin is limited to 4,000.

This video (Latvian only) shows how the coin came to be.

There’s also another coin commemorating the Baltic independence anniversary that’s being issued in 2018. Read about it here.