December 6, 2012  – At decisive historic moments, providence tends to push new, enthusiastic and hitherto unknown heroes to the foreground. Among them are not only battle-hardened soldiers but also poets, composers and artists, energisers of the national spirit. The outstanding Latvian sculptor Karlis Zale (1888-1942) was the flag-bearer of the national idea whose talent shone briefly but brightly: the memorial of the Brethren Cemetery and the Freedom Monument gained the status of national treasures.

Karlis Zale honed professional skills during his student and work years in Russia (Kazan, Moscow and St. Petersburg) and expanded education in Berlin. He returned to Riga in 1923 as a mature master and got involved in designing the memorial ensemble for the Brethren Cemetery along the talented architects Andrejs Zeidaks, Peteris Feders and Aleksandrs Birzenieks. Karlis Zale was charged with the most complicated task to express, by sculptural means, the ability of the Latvian soldier to sacrifice himself in the struggle for the freedom of his homeland, to lend the quality of an epos to the drama of the soldiers fallen in World War I and armed struggles for Latvia’s statehood. The architectonic part of the outstanding memorial is crowned by the sculptures created by Karlis Zale: in their monumental treatment the then topical modernist forms are clearly visible. The development of the memorial ensemble at the Brethren Cemetery was concluded by its solemn dedication on 11 November 1936. In 1942, Karlis Zale also found his permanent resting place there. The contribution that he had made during his active life was an eloquent testimony to his true love of his country and nation, and his service to his native land and freedom.

There was a commonly felt need for a visual image that would embody the struggle for freedom and national independence, a simultaneous commemoration of the basic Latvian values. The competition for such an image was won by Karlis Zale whose design ‘Shine Like a Star!’ was developed together with architect Ernests Stalbergs (1883-1958). The composition of the Freedom Monument in the heart of Riga consists of 13 sculptural groups and reliefs. By lending an artistic treatment to the conceptual cornerstones of the newly acquired Latvian statehood, Zale combined the mythical and the real in a harmonious ensemble. The central statue of Mother Latvia is surrounded by allegorical images of values important to Latvians and references to crucial historical events. The obelisk is crowned by a copper statue of Liberty that holds three gilded stars symbolising the three main regions of Latvia. 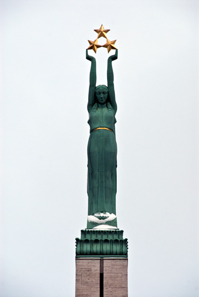 The monument that was financed by donations was unveiled on 18 November 1935. In his keynote speech, the then President Karlis Ulmanis invited everyone to view the monument as an embodiment of happiness about Latvia, a strong, beautiful and independent state. From a memorial to the national pride the Freedom Monument became a reminder and keeper of the idea of freedom and independence in the decades of occupations. It gave people hope, supported their faith, and was a beacon of freedom. The foot of the monument became the central locus of the national reawakening, an altar of prayers and thanksgiving. The Freedom Monument became the embodiment of national ideals and energies, which turned into the magical power that let Latvians regain their statehood and freedom.
Nations and countries tend to have unifying symbols for the ideas at their roots: for the US, it is the Statue of Liberty, for France, the Eiffel Tower, Arc de Triomphe and the Marseillaise. Any mention of Rome conjures the images of the Coliseum or St. Peter’s Basilica. For Latvia, it is the Freedom Monument by Karlis Zale. 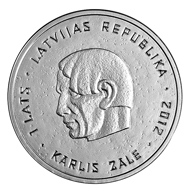 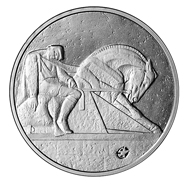 The coin is roughly frosted and of stony texture in appearance. The central field on the obverse features K. Zale’s portrait, taken from the sculptural group ‘Work’ of the Freedom Monument, which is encircled by the inscriptions KARLIS ZALE, 1 LATS, LATVIJAS REPUBLIKA and the year 2012, separated by rhombic dots.
The reverse of the coin features the sculpture ‘Dying Horseman I’, taken from the memorial ensemble of the Brethren Cemetery. The Eurostar logo of the ‘European Silver Programme’ is displayed on the right below.
On the edge run the inscriptions LATVIJAS BANKA, LATVIJAS REPUBLIKA and 2012, separated by rhombic dots.

Some works of Karlis Zale are shown here.