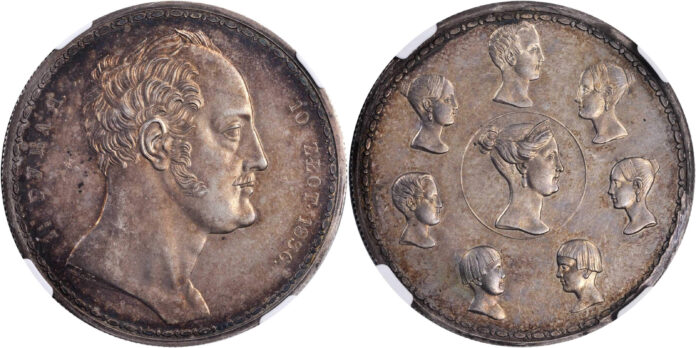 Stack’s Bowers Galleries announces their next sale of World and Ancient coins, and World medals, and paper money. Set to cross the auction block over seven sessions (four live and three Internet only) on 15th, 16th, 18th, and 19th January 2021, this monumental offering features nearly 3,700 lots with a combined high-end estimate of over $8.6 million. Despite there being no traditional NYINC bourse, the sale promises to be an important event and continue the excellence in this area for which the firm is well known. Stack’s Bowers Galleries’ user-friendly online bidding interface allows for seamless participation in this event either via their website or mobile apps. For those wishing to participate in person, however, the firm will be offering floor bidding for these live sessions at the Balboa Bay Resort in Newport Beach, California (in accordance with Covid-19 directives and local mandates at the time of the auction). In the future, the firm’s newly opened headquarters in Costa Mesa, California will feature a state-of-the-art auction room – further evidence of their trend-setting role in the numismatic market.

Within the sale, collections and extensive runs will attract intense interest and great enthusiasm, as there are many unparalleled offerings. The majestic Oro del Nuevo Mundo Collection leads the way and is featured in its own session and catalog. As the name implies, gold and gold-related Latin American rarities are the sole focus. Notable highlights include, from Costa Rica, an 1828-CR F 8 Escudos in NGC MS-63+, and an 1873-GW 20 Pesos graded NGC MS-61. Among pieces from Mexico are found a phenomenal 1747-Mo MF “Dog Face” 8 Escudos and a massive 1916-TM Oaxacan 60 Pesos – the largest Mexican gold coin struck for circulation.

Continuing in the vein of the Oro del Nuevo Mundo Collection is the Las Colinas Collection – a near-complete type collection of Spanish-Colonial Mexican gold. This presentation is led by an impressive “Royal Presentation” 8 Escudos, that bears an opening bid of $150,000 and will create great excitement. Other highlights include a trio of Ferdinand VII/War of Independence issues: an 1813-Ga MR 8 Escudos, an 1821-Ga FS 8 Escudos, and an extremely rare 1812 4 Escudos.

Also featuring coins of Latin America, the Matthew Orsini Collection offers numerous appealing types, with an emphasis on the popular “sunface” motif and lively toning. Highlights include a superb 1813-PTS J Argentine 2 Reales graded PCGS MS-63, a shimmering 1838-CUZ MS Peruvian Escudo, and 1/2 Reales that offer vibrant colorful iridescence such as a 1756/5-G from Guatemala and an 1867-Go YF from Mexico.

Another extensive run presents an impressive assortment of rarer Russian coins and patterns, with a particular emphasis upon gold 10 and 5 Rubles from Catherine II (the Great). Building upon the success of the Kyle Ponterio Collection of Countermarks last January, a large number of these enigmatic, repurposed coins will be presented as well – a great opportunity for those looking to expand even more within this growing genre. Of particular interest is a beautiful Danish West Indies countermarked U.S. 50 Cents – offering an outstanding 19th century provenance – and a highly coveted Valparaiso 4 Reales from Chile.

Among the individual highlights in the Ancient coins section are a silver Dekadrachm from the hand of Euainetos and a rare and stunning gold Stater from Tarentum. Roman Imperial coins include the ever popular “Port of Ostia” bronze Sestertius from the reign of Nero and an extraordinary Choice Mint State gold Aureus of Diocletian.

Gold issues are led by an outstanding 1925 100 Lire Prova from Italy graded NGC MATTE PROOF-67, an incredibly rare 1896 25 Rubles from Russia, and a seemingly unique 1516 Real from Cologne in Germany that presents the three magi on one side and St. Ursula’s pilgrimage on the other. Other unusual gold issues feature an apparently unique Medallic 24 Ducats from the reign of Leopold Anton Eleutherius von Firmian, the Archbishop of Salzburg; a 1632 Medallic 10 Ducats from St. Veit (possibly an off-metal taler striking in gold); another off-metal striking, this time an undated Austrian 1/4 Taler of 6 Ducat Weight from 1669, and a Bohemian Medallic 4 Ducats from Joachimsthal in 1552 that is quite possibly another unique piece and displays spectacular Christian iconography.

Among the silver highlights are Russian patterns, with the fabled “Family Ruble” of Nicholas I leading the pack. One of the most sought after crowns of the 19th century due to its rarity and elegance, this NGC MS-62 example will attract strong bids when it crosses the block. Also sure to appeal to advanced collectors are an 1801-AI Ruble Novodel, an incredibly rare 180(6) Ruble Pattern with a reverse lamination, and another Ruble Novodel, this time from 1810 and graded NGC PROOF-62.

Exotic and unusual silver issues continue with the storied 15 Pence from New South Wales, affectionately known as a “Dump”, here offered in far better quality than is generally encountered. Also of note is a spectacularly formed 1719 Heart-Shaped Cob Presentation 8 Reales from Bolivia, and the single finest certified “Volcano” Peso of any date, an 1820-SANTIAGO FD graded an unmatched MS-65 by NGC.

The Stack’s Bowers Galleries January 2021 auction also presents two sessions of live and internet paper money, an eclectic offering that comprises private collections from Portugal, Spain, Colombia, Costa Rica and Haiti, as well as key dates and rare varieties. Also of note are treasures from Canada, along with some very rare higher denominations from Panama, including a 5 Balboas and a 10 Balboas. In addition, exceptional rarities from Honduras, Madagascar, Philippines, Portuguese India, Zambia, and many other countries can be found in the sale.

The entire Stack’s Bowers Galleries January 2021 auction is available for viewing and bidding online. For more information on this sale or to learn about consigning to an upcoming event, contact the firm at 800-458-4646 or via email.