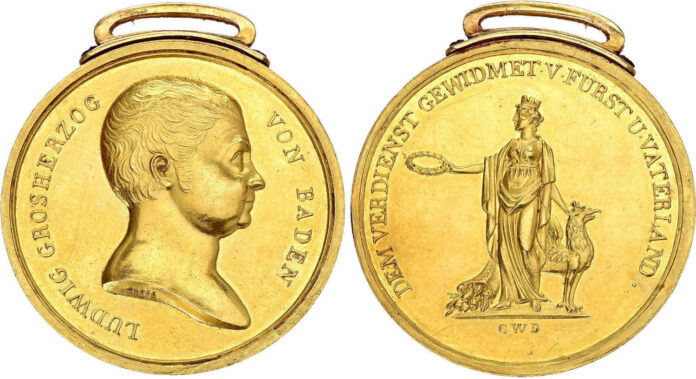 From Monday, 5th December to Wednesday, 7th December 2022, starting at 4 p.m. CET, Künker’s eLive Auction 75 will take place. The online auction contains a total of 1,679 lots with orders, decorations, medal buckles, miniatures and certificates from Germany, Europe and overseas. The auction will start on 5 December at 4 pm CET with Part 10 of the Peter Groch Collection with duplicates from Prussia to the German Empire, followed by Part 11 of his collection with the rest of Slovakia and Hungary. Then follows the sixth and final part of the Ottoman Collection.

From France Künker has been entrusted with an extensive collection, the collection of Mr “L” with war decorations mainly of the 20th century, which will be offered on 6 December from 4 p.m. CET. German decorations will be first to be auctioned off, followed by decorations from Europe and overseas.

The last part of the auction with orders, decorations and certificates of various possession will start on 7 December at 4 p.m. CET with German orders and decorations, including a collection each from Oldenburg and from Prussia, but also series from Baden and Bavaria as well as a number of life-saving medals. This will be followed by European decorations (among others from Italy, Austria, Russia and the Soviet Union, Sweden and Spain) and some from overseas.

In order to participate at the eLive Auction live on the internet a personal myKünker Account is required. This service allows you to place bids via the auction catalog.

January, 7. 2021
Auction 346 is Künker’s spectacular start into the year of its 50th anniversary: the sale features 678 coins and medals as well as 43 orders including selected lösers of Brunswick-Lüneburg from the Friedrich Popken Collection.
error: