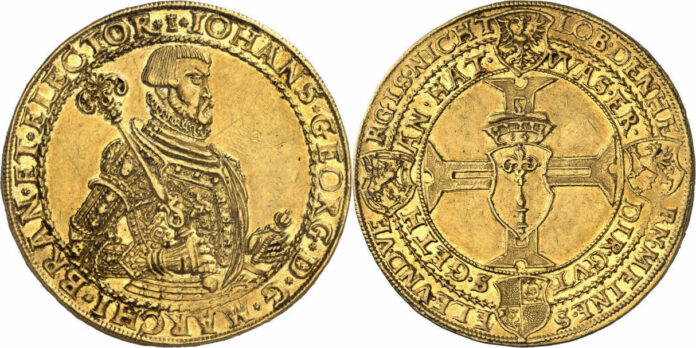 Four catalogs with 3,124 lots and a total estimate of 7.7 million euros – that’s the material of Künker’s Summer Auction Sales, which will be held from 20 to 24 June 2022. Three of the catalogs are dedicated to one impressive collection each. Catalog 368 contains the first part of the Dr. Walter Kemlein Collection with Saxon coins and medals, catalog 369 is dedicated to the collection of the Berlin savings bank including great rarities from Brandenburg-Prussia and rare issues of the German Empire. Catalog 370 deals with German gold and silver coins from the Köhlmoos Collection and catalog 371 combines the material of many private collections, including the Dr. Pavel Liska Collection of Czechoslovak gold coins and a special collection Venezuela.

The collection of Saxon coins, medals and decorations built by Dr. Walter Kemlein over about half a century consists of more than 3,500 objects. The first part of this collection marks the beginning of Künker’s Summer Auction Sales 2022 as auction 368. The material covers a time frame ranging from the bracteates of the Margraviates of Wettin and Meißen via the Electorate and Kingdom of Saxony to the Ernestine and Albertine Duchies of Saxony, Saxe-Altenburg, Saxe-Coburg-Eisenach, Saxe-Eisenberg, Saxe-Gotha-Altenburg, Saxe-Coburg-Saalfeld, Saxe-Weimar, Saxe-Weißenfels and Saxe-Zeitz. In addition, there are coins and medals relating to Saxony and Thuringia.

The catalog contains everything a collector of Saxon coins and medals could dream of: bracteates present wonderful Romanesque artworks, rare gold and silver coins feature magnificent Renaissance and Baroque portraits and, not to forget, medals made by the best European artists commemorate historical events that shaped Saxony and had a major impact on Germany as a whole.

There are so many outstanding pieces that it is impossible to list them all in this preview. Particularly remarkable, for example, is a specimen of the first klappmützentaler of very attractive quality with a fine patina and a provenance that can be traced back to 1917. And many collectors will be amazed by the impressive Renaissance portrait of Frederick III, called the Wise. Augustus the Strong is represented by several gold coins of perfect quality and a few extremely rare talers and klippes including the so-called butterfly coins and vicariate issues.

The medals are particularly impressive. These artworks of high historical importance are comparatively affordable considering their rarity. We want to mention two examples for the wealth of material: The reverse of a 1719 silver medal depicts equestrian games organized for the wedding of the son of the prince-elector. Another example is an impressive oval silver medal from 1900, featuring the Jemlich organ of the Church of the Holy Cross in great detail, an instrument that enjoys great renown among music lovers.

The Dr. Walter Kemlein Collection is a mirror of Saxon history and culture, friends of the Free States of Saxony and Thuringia should not miss out on taking a close look at this catalog.

Catalog 369: The Collection of the Berlin Savings Bank – Brandenburg-Prussia and the German Empire

The collection of the Berlin savings bank of Brandenburg-Prussian issues consists of two parts. The major part contains – of course – coins from Brandenburg-Prussia, the majority of which are characterized by great rarity and outstanding quality. The focal point is on iconic talers of Prussian history, for example a series of trading coins by Frederick the Great.

Auction house Künker is particularly proud of the fact that this collection contains a coin with which the auction house went down in auction history in 1999, selling the piece in its auction 47 for DM 375,000. Now they are pleased to be able to offer the portugalöser again, which was issued by John George in 1584 in Berlin and had been the most expensive German coin ever sold at auction at the time.

The second part of the collection is dedicated to German coins minted between 1871 and the introduction to the Euro. Here, too, collectors will find numerous rarities, which were selected with a lot of knowledge and refined taste by the curators of the collection. It becomes obvious that only top quality was considered for the coin collection of the Berlin savings bank.

All these magnificent coins are likely to realize outstanding results given the current market situation and benefit those who are in need of urgent help right now. Ulrich Künker comments: “We hope that the funds that will go to Berlin’s art and culture scene can help to mitigate the partly disastrous effects of the pandemic.”

Catalog 370: German Gold and Silver Coins from the Annemarie and Gerd Köhlmoos Collection

The name “Köhlmoos” has established itself in the numismatic world as a synonym for perfect quality. And catalog 370 containing German gold and silver coins from the Annemarie and Gerd Köhlmoos Collection lives up to this reputation. After auctioning German coins minted from 1800 onwards, it’s now time for the sale of the issues produced by the countless small states of the Holy Roman Empire of the German Nation. Connoisseurs will discover pieces of rulers and cities that only issued very few specimens on highly important occasions. Those interested in the art of portraiture will be fascinated by the skills of German engravers, who impressively captured the features of their patrons – regardless of whether it was in the Renaissance, Baroque or Classicist periods.

The offer is complemented by 43 gold coins of the German Empire, including Reuss, older line, 20 marks 1875 of extremely fine quality and Saxe-Meiningen, 20 marks 1872 of almost FDC quality.

Auction 371: Coins and Medals from Medieval and Modern Times / German Coins after 1871

Auction 371 will be held from 22 to 24 June 2022. It contains world coins and medals made from silver, gold and other materials. Here, too, several private collections will be on sale. We want to present two of them.

Anyone who collects Czechoslovak gold coins should already start saving money for the sale – an abundance of coins of the kind that is offered in this catalogue hasn’t been seen on the market in recent years. More than 100 coins of excellent quality are on sale.

Most of the specimens are from the collection of Dr. Pavel Liska, a Czechoslovak entrepreneur who ran a trading company in Sweden. The premises of his company were located directly across the street from the Ahlström coin shop on Kungsgatan in Stockholm. An avid coin collector, Dr. Pavel Liska initially purchased Swedish issues from Bjarne Ahlström, then he specialized in Czechoslovak gold coins minted after 1923. Like many passionate collectors, Dr. Pavel Liska quickly noticed how rare certain years were. Therefore, he decided to focus his collecting activities on purchasing high-quality specimens of these rarities.

The collector who built the special collection of Venezuelan coinage had a similar ambition. The county gained independence in 1831. The collection dates back to the Spanish dominion and does not only cover issues of the young state but also contemporary Venezuelan coinage and the country’s gold commemorative issues. A 500-bolivares gold coin from 1975 will be of particular importance to all those who are interested in contemporary history. It is dedicated to the nationalization of the oil industry, an event that was to become crucial to the history of modern Venezuela.

These are just two examples of the versatile, exciting material offered by Künker in auction 371. This catalog really has something to offer for every collector. From high-quality multiple gold coins of the Habsburgs to medieval pfennigs, medals, talers and estimates in the lower three-digit range.

The auction ends with an extensive offer of German coins minted after 1871, including many rarities of great quality.

You can study all lots of the four auctions in the online catalog.

For further information about the auction and the auction house, visit the Künker website.

Hesse, Elizabeth and the Reformation

September, 22. 2022
The story of how much influence St. Elizabeth had even centuries after her death is quite a spectacular one to tell. With the help of the Loos Collection, which will be on sale at Künker in September, we will do just that: talking of a canonized landgravine, political intrigues, power-conscious women and the consequences of syphilis.
error: