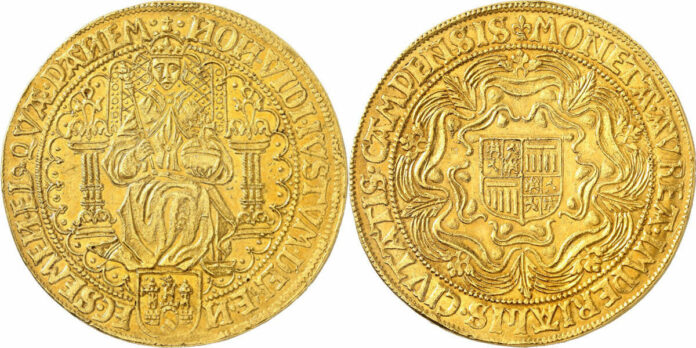 Sometimes, the story of what happened to a coin after it was minted is even more exciting than how it came about. This applies to the eightfold rose noble from Campen, which was sold for 700,000 euros on 22 March 2022, making it the most expensive gold coin ever sold on German soil. Felix Schlessinger purchased the piece in 1938 for 900 guldens. He consigned it to an English auction sale within the same year, where it had a starting price of 280 pounds and did not sell. It was returned to the consigner and was still part of Felix Schlessinger’s stock in February 1941, when the new government of the Netherlands, which had just been installed by the Nazis, issued the order to confiscate all gold coins in Jewish possession. The eightfold rose noble from Campen was one of a total of 635 numismatically important gold coins that Felix Schlessinger handed over to the Dutch central bank. Felix Schlessinger and his wife died in the gas chambers of Auschwitz. Their son Max Schlessinger succeeded to embark on an adventurous escape. He found a new home in the United States. There he called himself Mark Salton and, once again, opened a coin shop. Together with Jacques and Hans Schulman, he was able to get this very coin back. He offered it for sale in the 1950s in his New York coin shop. But due to circumstances we can no longer comprehend today, this sale never came about. Thus, the rose noble was still unsold when he gave up his coin shop and incorporated his former stock into his own collection.

In 2022, this very eightfold rose noble was offered for sale for the first time after more than half a century. Künker’s experts had estimated it at 250,000 euros. After a vivid bidding battle, the coin was sold for 700,000 euros. Like all the proceeds from the auction, three organizations will benefit from this amount that commemorate the Holocaust and fight against anti-Semitism. That was the wish of the New Yorkers Lottie and Mark Salton, who were once called Lottie Aronstein and Max Schlessinger, lived in Germany and were robbed of their homeland and their loved ones by the Nazis.

It was an auction of superlatives, which is shown by the mere fact that 700 lots with an estimate of 2.6 million euros realized a total result of 7.7 million euros. This means that the average hammer price amounted to 11,000 euros per lot!

Thus, Künker’s auction 362 might have realized the highest total hammer price ever achieved by a single German coin auction.

This is due to several factors. For one, the coin market has been experiencing a boom for several years, and the events of the past two years and the last few months have heightened this development. Secondly, especially for multiple gold coins of perfect quality, coin collectors at home and abroad are prepared to pay enormous sums – and the part of the Salton Collection that was auctioned on 22 March 2022 at Künker consisted of these very coins. In addition to a favorable timing and the appropriate material, the history of the coins was a third factor that caused many collectors to want to get their hands at least on one piece of the collection. Fourthly, we have to remember that every single specimen has a provenance that predates the adoption of the 1970 UNESCO Convention – thus, it becomes clear why the results were so incredibly high.

In this review, we present four pieces with impressive increases in terms of the percentage, followed by the top ten overall results.

The Sheldon scale has 70 grades, including ten grades that refer to “Mint State” or “Proof” specimens. A historic coin from the 19th century with the grade PF66 or PF68 as well as the frost description CAMEO or even ULTRA CAMEO is highly unusual. Therefore, two French 20 francs pieces from 1849 that are actually not that rare jumped from an estimate of 3,000 euros to a hammer price of 38,000 euros, fetching more than twelve times their estimate.

NGC graded a Salzburg coin MS62 that was minted for the great feast celebrated by the Archbishop of Salzburg to commemorate the 1100th anniversary of the Salzburg Abbey. The five saints whose shrines were carried during the procession are depicted in detail with all their attributes. One coin collector was willing to pay 50,000 euros for this baroque teeming picture – ten times the coin’s estimate of 5,000 euros.

The Ducal House of Savoy occupies an intermediate position among coin collectors. While its dominion was mostly on French soil, it is mainly Italian collectors who are interested in these coins as the kings of unified Italy came from Savoy. These avid collectors immediately recognize rare varieties and are willing to pay a high premium for it – in this case more than fifteen times the estimate. The piece jumped from an estimate of 3,000 euros to a hammer price of 46,000 euros.

If the result is the same, the specimen with the higher increase in price compared to its estimate will occupy the higher rank.

Customers all over the world love city views, especially when depicted on perfect gold coins like this one: the Stone Bridge of Regensburg is still one of the city’s main sights today. The piece graded MS61+ by NGC climbed from an estimate of 50,000 euros to nearly triple that amount and sold for 140,000 euros.

A very rare Dutch coin from the 17th century struck in proof quality – that’s something you don’t see every day. Therefore, the off-metal strike in gold of a silver ducat from the province of Holland from 1687 sold for impressive 140,000 euros despite an estimate of 30,000 euros and thus achieved five times its estimate.

Nuremberg celebrated the 50th anniversary of the Peace of Westphalia in 1698 with an extensive issue of multiple gold coins, which can be found of varying quality and weight in auctions every now and then. Due to their magnificent city views, they have become a favorite of collectors over the past years. Thus, the hammer price of the specimen from the Salton Collection was much more than its estimate. Instead of 30,000 euros, the bidding battle for the lot that had been graded MS64 PL by NGC ended at 160,000 euros – more than five times the estimate.

Habsburg coins produced by the Prague mint are among the most popular collectibles today; this explains the impressive increase experienced by a quintuple ducat by Emperor Ferdinand III from 1651. It achieved 170,000 euros – almost seven times its estimate of 25,000 euros.

Also from Prague is a three emperors issue, which does not depict the ruler who commissioned the coin but Maximilian I, Charles V and Ferdinand I – the most important Habsburg rulers. Since the coin does not say who ordered its production, the origin of the specimen is disputed. Traditionally, the coin is said to have been issued on behalf of Rudolf II, but numismatic research has shown that it can be linked to coins of his successor Matthias by means of die comparison. The very rare piece that was graded MS62 by NGC sold for 180,000 euros and had an estimate of 50,000 euros.

And another multiple gold coin from Prague. Ferdinand III had this magnificent tenfold ducat minted in 1644. The piece with an estimate of 30,000 euros also jumped to a hammer price of 180,000 euros.

Although this is a Habsburg multiple gold coin too, the mint is different: St Veit. There, coins were produced between the 13th and 18th century, first for the Counts of Gorizia and Tyrol, then for the Habsburgs. The piece offered at Künker depicts the portrait of Ferdinand III with the then fashionable millstone collar. It is the very rare type of nine ducats and changed hands for 190,000 euros. The estimate had amounted to 50,000 euros.

The third most expensive coin of auction 362 was also issued by a Habsburg. It was minted in Hall in Tyrol but refers to a German office held by Archduke Maximilian III of Austria, called Deutschmeister, in the years between 1590 and 1618: Maximilian was Grand Master and Deutschmeister of the Teutonic Order. In 1614, he had an impressive coin minted as Deutschmeister, which was graded MS61 by NGC. It achieved 210,000 euros, more than four times its estimate of 50,000 euros.

The second most expensive coin of the auction was also issued by a Habsburg: by Archduke Ferdinand II of Tyrol, parts of whose collection can still be seen today at Ambras Castle. His extensive coin collection was unfortunately scattered to the four winds. It probably inspired him to create the prototype of the three emperors issue, which was also to be imitated by other Habsburgs. Künker was able to offer an extremely early variety, which was already estimated at 150,000 euros and sold for 220,000 euros.

And this brings us back to the eightfold rose noble, currently the most expensive gold coin ever auctioned on German soil. The extremely rare specimen of 60.95g is an absolute rarity of early modern times. It depicts the English Queen Elizabeth I on her throne – after all, the Netherlands and England were closely linked by common trade interests. Religion also connected the two nations: in 1588, Spain sent its army to eliminate the most important ally of the Netherlands in the 80 Years’ War. The rose noble represents this great past. And it represents – as mentioned in the beginning – the fate of Jewish coin dealers in the Third Reich. 700,000 euros is an impressive price for it.

The money raised from the sale of the Salton Collection will benefit the following Jewish organizations:

It is a great honor for auction house Künker that Lottie and Mark Salton stipulated in their will that their important numismatic collection be jointly sold by the American auction house Stack’s Bowers Galleries and Künker in the USA and in Germany.

A brochure was published on the occasion of the auction, which is dedicated to the fate of Lottie and Mark Salton and tells more about their families. It examines a piece of the history of the German coin trade since Max Salton was the last descendent of the Hamburger-Schlessinger coin dealer dynasty. You can download the brochure online for free.

All results of the auction are available online.

For further information about the auction house, visit the Künker website.

Hesse, Elizabeth and the Reformation

September, 22. 2022
The story of how much influence St. Elizabeth had even centuries after her death is quite a spectacular one to tell. With the help of the Loos Collection, which will be on sale at Künker in September, we will do just that: talking of a canonized landgravine, political intrigues, power-conscious women and the consequences of syphilis.
error: