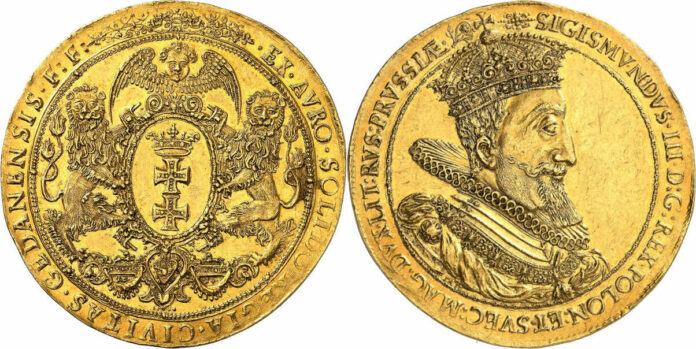 This fall, Künker publishes seven catalogs with as many as 4715 lots and a total estimate of 9 million euros. Since it would be impossible to cover all the material in one week, the seven auctions will take place over the span of two auction weeks. From 26 to 30 September 2022, coins and medals from medieval and modern times will be on offer, moreover, an order auction will be held. The four catalogs contain, among other things, gold issues from the collection of a Swedish-Swiss entrepreneur, including mainly pieces from Sweden, Austria and Hungary, as well as the collection of the Verschoor brothers with coins from the Kingdom of Holland and Dutch medals. Selected lösers from the Popken Collection, the first part of the Dr. Hans-Jürgen Loos Collection with coins of Hesse and the Hessian area as well as a collection of Franconian issues with an extensive selection of Nuremberg coins are just some of the topics that will dominate the first auction week. The second auction week with ancient coins will be held as a public auction on-site from 18 to 20 October. In addition, an eLive Premium Auction will take place on 21 October. The names Köhlmoos and Salton guarantee outstanding quality and excellent provenance.

Due to the sheer wealth of material, the preview will be divided into two parts. This is the preview for auctions 372 to 375.

Catalog 372: Orders and Decorations from Germany and All Over the World

A total of 168 lots with orders, decorations and official instruments are part of the phaleristic auction that starts off Künker’s Fall Auction Sales. The auction consists of three parts: It starts with a selection of important orders and decorations, mainly from the German states. Many of them are from an old collection that was probably completed in the 1960s. Next is the 9th part of the Peter Groch Collection, this time with pieces from the First Slovak Republic from 1939 to 1945 with some extremely rare pieces. The third part of the auction offers the 5th part of the Ottoman Collection with Ottoman orders and decorations.

If you are interested in gold coins, you should not miss out on taking a close look at auction catalog 373. The collection of a Swedish-Swiss entrepreneur contains many interesting pieces of above-average quality from the Middle Ages to the 20th century. The offer covers the entire world, although the collector had a special preference for Nordic countries and the Habsburg hereditary lands. The price spectrum of this auction sale contains everything from estimates at the current gold price to estimates in the five- and six-digit range. Let us mention two tenfold ducats as an example for the upper price segment, both of them from the collection of a Swedish-Swiss entrepreneur. The first is from the city of Danzig and features the portrait of Sigismund III. The second was minted in Prague in 1629 by Ferdinand II and presents the ruler in full armor with crown, scepter, orb and cross on the obverse.

Another outstanding rarity comes from Great Britain. It is the third known specimen of a highly rare medal with the image of young Charles I, created by the Dutch copper engraver Simon de Passe. For this purpose, de Passe developed a completely new method in the years after 1615, by means of which the depiction was not produced by a coin press striking the metal to form a relief, but was engraved by a machine as in the case of copper engravings.

Speaking of rarities, this auction, too, comprises an extensive offer of coins from the Czechoslovak Republic, including duplicates from the Dr. Pavel Liska Collection, whose sale in June was a major success.

However, also the section of Hungarian issues offers a wealth of rarities that were created in the early modern period, including several single and multiple ducats from Transylvania.

Catalog 373: Kingdom of Holland / Dutch Medals – The Collection of the Verschoor Brothers

It’s quite telling collectors aren’t the only ones to trust Künker to sell their unique collections – colleagues who have been closely following market activities for decades do so, too. The twin brothers Dingeman (Dim) and Hendrik (Henk) Verschoor are internationally well-known and have an excellent network. The Dutchmen ran their coin shop very successfully since 1984. Their love and their very special expertise was for Dutch medals, and they significantly expanded the market for these issues. They had so much passion for the field that they also built up a private collection of particularly important medals, which will now enter the market as part of Künker’s auction 373.

What’s almost more fascinating is the small selection of coins from the short-lived Kingdom of Holland, which existed under the rule of a brother of Napoleon from 1806 to 1810. Dim Verschoor, who passed away in 2020, had researched this field and built up one, if not the most important collection on this subject.

28 September will be thoroughly dedicated to Hesse and the entire Hessian area. Künker will offer the first part of the Dr. Hans-Jürgen Loos Collection. The economist, who headed the accounting department of a large corporation, enjoyed numismatics as a way to unwind from his daily work. An enthusiastic local historian, he was keen to create a collection that would provide an overview of Hesse’s monetary history that was as complete as possible. He called his about 1,400 issues from seven centuries “Minted Hessian History”. The collector stated that he “made the deliberate choice not to build up a complete special collection of individual territories, but to collect a representative cross-section of Hessian coin history as an expression of the historic development of the Hessian region in the area of today’s Hesse”. Modestly, Dr. Loos mentions “some very rare specimens” in his preface. In fact – as in any great collection – there are both common as well as extremely rare specimens to find, which is why anyone who is interested in one of the areas that are located in today’s Federal State of Hesse should study this catalog very carefully.

Part 1 of the collection covers issues from the following territories

Auction 375: Nuremberg / Selected Lösers from the Friedrich Popken Collection / Coins and Medals from Medieval and Modern Times / German Coins after 1871

The last two days of the auction week are dedicated to auction 375, which includes further special collections. For example, another part of the Frederick Popken Collection with selected lösers can be marveled at. The auction starts with a Franconian regional collection, including gold and silver coins from Nuremberg as well as a rich variety of medals by Nuremberg artists. Particularly abundant is the selection of rare tokens that is offered as part of this collection. There are also some treasures for bibliophiles among the offer.

As always, Künker presents a broad selection of German coins and medals from Anhalt to Würzburg, from the Middle Ages to the founding of the German Empire, from three-digit to five-digit estimates.

The section with world issues offers a few great rarities. For example, an original specimen of a Renaissance medal with the portrait of Henry VIII of England is on offer, celebrating him as the head of the Church of England and Ireland.

If you’re interested in Sweden, you can look forward to an extensive selection of about 150 lots with coins and medals from the far North.

However, there are also impressive specimens in the section with Chinese issues. Künker is able to offer as many as four great rarities form the beginning of the 20th century.

Of course, as always, there is a vast offer of coins from the German Empire including great rarities, such as a 20-mark piece by Henry XXII of Reuss-Greitz, older line, about FDC.

For more information on the auction house, please visit the Künker website.

January, 20. 2022
On 1 and 2 February 2022, Künker will hold its auction 360 as an eLive Premium Auction. It contains German coins and medals of top quality – with estimates from the two- to the four-digit range.
error: