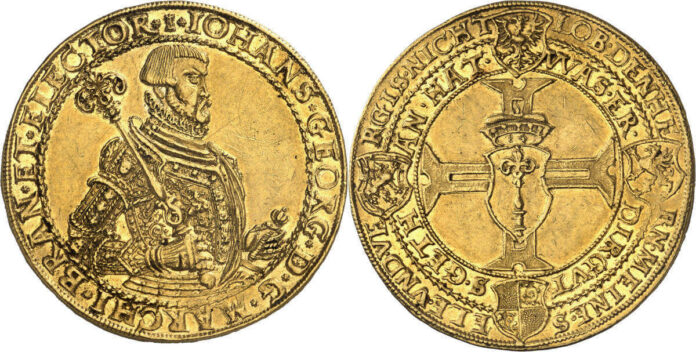 Künker: Coins at an All-Time High

420,000 euros for a portugaleser of 10 ducats, 180,000 euros for a quintuple ducat from Czechoslovakia, brakteates sold for more than ten times their estimate – the review of Künker’s Summer Auction Sales 368 to 371 could be summarized as follows: coins are at an all-time high. Those who are thinking about selling their collection can be sure to find an active and interested market right now. Therefore, it is no surprise that the total result of all four auctions amounted to 12.8 millon euros. The total estimate had been 7.6 million euros.

We present the Top Five results of the Summer Auction Sales, and, in addition, the three most expensive lots of every auction catalog.

A sum of 130,000 euros was achieved by a quintuple ducat, of which Czechoslovakia had as few as 100 specimens minted in Kremnica in 1951. This is remarkable: it demonstrates that even coins produced after the Second World War can become exclusive collectibles whose value to collectors has nothing to do with their material value. Interestingly enough, the motif or rather the topic of the coin is of no importance to the secondary market. What’s important is that only very few pieces were minted, and that the specimen is of extremely high quality.

The same is true for the 10-fold ducat minted in the same year that bears the same motif. Its 34.41g of pure gold were worth about 1,900 euros or 2,000 dollars at the time of the auction. The hammer price was 170,000 euros – about 90 times its material value. This high price is due to the large interest for coins from Czechoslovakia in today’s Czechia and to this coin type’s incredibly low mintage figure of 56 specimens.

The most expensive coin in this series was a quintuple ducat from 1938, i.e., from the year in which the Great Powers sacrificed the Sudetenland to Hitler in order to prevent a war  that turned out to be inevitable after all. After giving away the Sudetenland, Czechoslovakia disintegrated within a few months. The few coins that were minted in 1938 are therefore of utmost importance to the national identity of today’s Czech Republic. Accordingly, the quintuple ducat, of which only 56 specimens were produced, was sold for 180,000 euros, making it the most expensive coin of the Dr. Pavel Liska Collection. The prices of the other two denominations issued in 1938 are also noteworthy: the double ducat with a mintage figure of 186 specimens was sold for 110,000 euros, the single ducat of which 56 specimens were minted achieved 77,500 euros.

If you would like to learn more about the historical background and the motifs of the gold coins from Czechoslovakia, watch this film produced by Künker.

The second most expensive coin and the most expensive coin are to be found in another catalog. They were sold in auction 369, in which the Berlin Savings Bank had their collection of coins from Brandenburg-Prussia enter the market in order to support Berlin’s cultural institutions with the proceeds. Berlin artists can be delighted about the major interest of coin collectors: the rare 1570 portugaleser of 10 ducats by Elector Joachim II of Brandenburg fetched 220,000 euros.

Almost double this amount, namely 420,000 euros, was the hammer price achieved by the portugaleser by John George, the eldest son and successor of Joachim II. There are probably two reasons for this result: for one, the piece is unique; moreover, it was of better quality than the first portugaleser. Therefore – at least according to research done with the Sixbid archive – this coin might be the most expensive portugaleser ever sold at auction. It certainly was the most expensive one in this auction sale!

If you want to know more about the history of portugalesers, we recommend the article we published on these two coins.

Auction catalog 368 contained the Dr. Walter Kemlein Collection of Saxon coins and medals. It is the first part of a much more comprehensive collection including more than 3,500 objects. The total result was more than twice the estimate, which raises expectations for the sale of the second part of this collection. It will take place soon in the context of an eLive Auction. After all, the results illustrate that collecting Saxon pieces is highly popular right now.

In 3rd place we have a joint issue by the Elector of Saxony, the Duke of Saxony and the Landgrave of Hesse, whose historical background was elaborately laid out by Künker in a detailed article. The piece of paramount historical importance featuring three major protagonists of Reformation history jumped from an estimate of 10,000 euros to a hammer price of 28,000 euros.

It was a given that a specimen of the first klappmützentaler of such great quality would fetch an outstanding result. The piece was sold for 34,000 euros, making it the second most expensive lot of the Dr. Walter Kemlein Collection.

The most expensive coin of this auction catalog wasn’t a surprise either: after all, there is a beautiful history to the butterfly taler – even 18th-century numismatists liked to tell it. Although it cannot be proven to this day, its creation is readily associated with the Countess of Cosel, the mistress of Augustus the Strong who was always surrounded by scandal. The winning bid for this popular Saxon piece was 55,000 euros.

Catalog 369: The Collection of the Berlin Savings Bank – Brandenburg-Prussia and the German Empire

The same result was achieved by a 1752 Prussian reichstaler, of which we know that it was sold at auction for 253 reichsmarks in 1889. For comparison: for this sum, one could rent a luxurious 3-bedroom apartment for more than 1.5 years in one of Germany’s major cities at the time.

Catalog 370: German Gold and Silver Coins from the Annemarie and Gerd Köhlmoos Collection

The 745 coins of the Köhlmoos Collection also fetched 150% of their estimate, which shouldn’t come as a surprise given the phenomenal quality of the pieces. The ancient coins of this collection are scheduled to be sold in Künker’s Fall Auction Sales.

Two coins made 3rd place in the list of the most expensive coins of the Köhlmoos Collection: an extremely rare vereinskrone by Ludwig II from 1865 and a 20-mark piece of the German Empire, issued by Henry XXII. The price of both specimens increased from an estimate of 20,000 euros to a hammer price of 36,000 euros.

The second most expensive coin is also from the 19th century, it is a very rare 20-mark piece by George II of Saxe-Meiningen from 1872, whose quality was described as “about FDC”.

The most expensive coin of this part of the Köhlmoos Collection is from Bavaria. A 1565 Munich double ducat by Albert V with a magnificent Renaissance portrait was sold for 44,000 euros.

Auction 371: Coins and Medals from Medieval and Modern Times / German Coins after 1871

There is no need to mention the most expensive coins of auction 371 as you already know them from the auction week’s overall Top Five list. Here are some other honorable mentions.

Exactly three times its estimate, i.e., 120,000 euros, was achieved by a quintuple ducat by Archduke Ferdinand Charles, issued on the occasion of his hereditary homage in 1646 as he came of age.

In Poland, too, the popular portugalesers were minted around 1600. A specimen produced under the rule of King Sigismund III, probably in Kraków, was sold for impressive 110,000 euros while the estimate had been 75,000 euros.

A 1522 6-fold ducat by the Salzburg Archbishop Matthäus Lang von Wellenburg climbed from an estimate of 40,000 to the same hammer price of 110,000 euros. Its reverse shows the abbey’s two patron saints: St. Rupert and St. Virgil.

Although only high-priced specimens were featured in this review: there were many coins in the auction sale that could be bought for little money. Take a look at the auction results and see for yourself. After all, coin collecting is a rewarding hobby for everyone!

All results can be found in the online auction catalog.

For further information about the auction house, visit the website of Künker.

December, 19. 2019
On the occasion of the World Money Fair, auction house Künker offers outstanding rarities from all over the world. Coins from the German States, the Holy Roman Empire and France are especially well represented. The highlight is the Prof Dr Rudolf Wiechert Collection o. a. featuring rarities from Brandenburg-Prussia.
error: