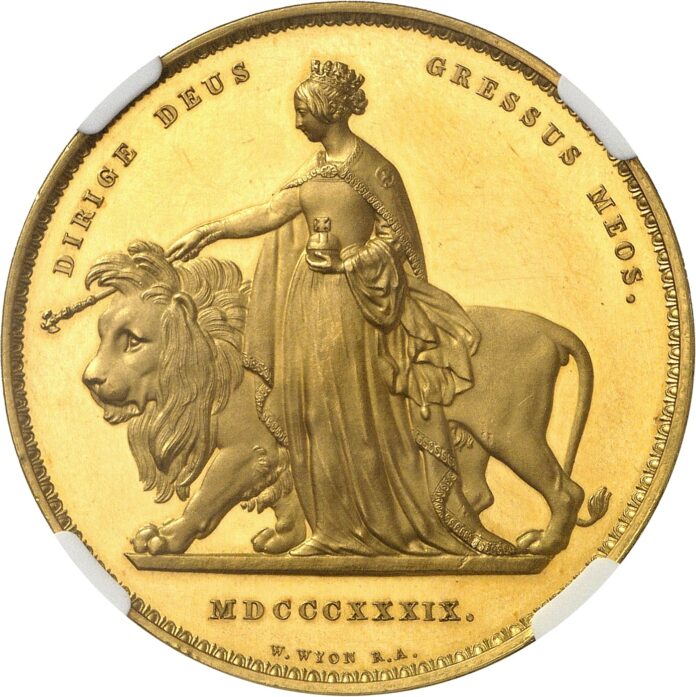 Künker: The Place to Go for Collections

It is almost the same before every single auction: we are faced with the problem of having to squeeze the legacy of numerous collectors’ lives into the few pages of an auction preview. The Künker Summer Auctions, too, which will take place from June 24th through June 27th, 2019, would not have turned into such big and well-stocked events if it had not been for the many collectors who once again decided to consign their collections to the auction house Künker.
Hence, Auction 322 will start off with an extensive series of carefully selected bracteates from the High Middle Ages. In addition, the Günter Westphal Collection of Solms will be sold and collectors of ships on coins will certainly discover an amazing selection of interesting pieces. Auction 323 is dedicated to two specialized collections: one is the comprehensive collection of French coins and medals encompassing an impressive 850 lots. The other is a collection of Polish rarities as you rarely get to see them. It includes, among other things, another part of the Phoibos Collection. Auction 324 is dedicated to gold coins and medals. It will see the auctioning of large South America and Italy series – including an extensive batch of Sicilian and Venetian coins. The Eberhard Link Collection has been added to both Auction 322 and 324. This time, it primarily contains coins from the Middle Rhine region. But Eberhard Link’s interests were more widely spread than that. Hence, collectors will also find a large batch of Swedish plate money from his collection in the Sweden section.
It is really a given at Künker that the “normal” numismatic spectrum with numerous rarities is covered alongside all these specialized collections.

The first day of Auction 322 will begin with 141 lots of selected bracteates. These not only include incredibly beautiful pieces of Romanesque art but also great rarities such as Falkenstein or Sigmaringen-Helfenstein. Whether it is crests or a knight in full suit of armor on his dapple gray, whether it is an abbot with a crozier and gospel or the emperor himself: all social ranks that possessed power in the Middle Ages are immortalized on these small pieces of art.

The collection offered at Künker contains both the richly illustrated bracteates of Central Germany as well as the less artistical yet much rarer products from the mints of Northern Germany and the extremely popular bracteates of the region of Lake Constance. 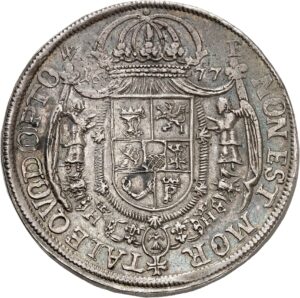 In the Germany section, you will not only discover several comprehensive collections, but also interesting and rare individual pieces. To avoid going beyond the scope of this preview, allow us to present one piece to represent this section: a double reichstaler of Christian I Ludwig of Mecklenburg-Schwerin, minted in Dömitz in 1677. On its obverse, the Baroque gem features the duke wearing a full-bottomed wig; the reverse depicts a coat of arms with a crown set atop the shield, supported by two angels and surrounded by the collars of the Order of Saint Michael and the Order of the Holy Spirit. 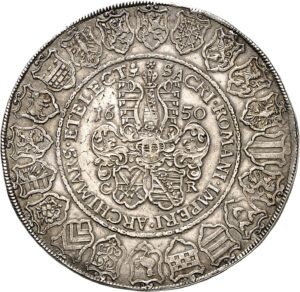 Lovers of Saxony will also get their money’s worth. More than 260 lots originate from the Albertan and Ernestine line. One example is the extremely fine wide triple reichstaler from 1650 which Johann Georg I had minted in celebration of the Peace of Westphalia.
Let us have a look at the collections then. The highlight here is definitely the collection of Solms compiled by Günter Westphal (1929-2017). In case you do not remember every single one of the former German small states: Solms was a county in Hesse, west of Wetzlar, which was partitioned repeatedly due to missing primogeniture arrangements. Coins from Solms are rare. We have not seen such a large amount of material on the market in a very long time. 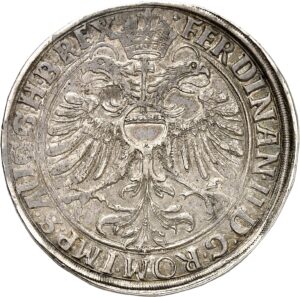 One interesting example here is a reichstaler of the Bernardian line which was not supposed to be struck in the first place. This line did not have the right of coinage. However, during the turbulent times of the Kipper and Wipper, Wilhelm of Greifenstein and Reinhard of Hungen attempted to join the coin business. In order to be on the safe side legally, they claimed on their coin that the silver used to strike it originated from the Hungen mines, which would have made it legitimate according to the Imperial Minting Ordinance. But there were neither mountains nor mines in Hungen. The Imperial High Court worked just fine even during the Thirty Years’ War. Those responsible for the coins were indicted and the minting of the coins was abandoned. The taler from 1623 offered at Künker is a rare record of this failed attempt. 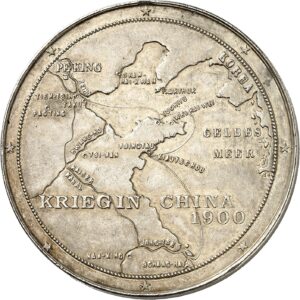 A note for anyone interested in numisnautics: as a former sailor, Günter Westphal compiled a large collection of ship images which will also be sold in Auction 322. Both rare individual pieces as well as extensive multiple lots will be offered. 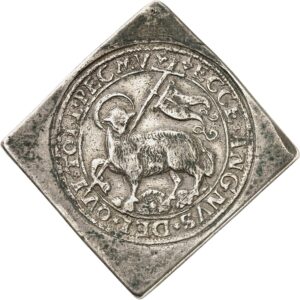 In past auctions already, batches of the Eberhard Link Collection were sold. This time, too, collectors of coins from the Rhine metropolises and dominions will rejoice over the amount of material. For example, his collection of coins of the Counts of Salm will be sold. They owned numerous estates along the Moselle river which were located in what are today Germany, Luxembourg and France. By the way, the house still exist to this day. Let us take a klippe to the weight of a half taler as an example: it was minted on behalf of Adolf Heinrich of Salm-Dhaun, who ruled from 1557 to 1606. This particular piece was so interesting in the eyes of its former owner Eberhard Link that he dedicated an article to it whose title translates to “Half a taler but not a half taler: the klippe of Salm-Dhaun struck from the dies of the Fat with the Agnus Dei”.

While we are talking about the Eberhard Link Collection, let us quickly look at world coins and medals, too. Another part of his collection hides in this section: a small series of about 30 lots of Swedish plate money which served as substitutes for talers in the country that had a lot of copper but hardly any silver at its disposal. 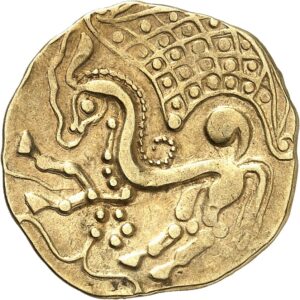 June 26, 2019 will see the sale of two specialized collections. The day will begin with an extensive collection of French coins and medals from the Celts to modern times, including coins of the royal, and later Republican, central government and coins of the French nobility and cities, commonly referred to in France as Féodales. 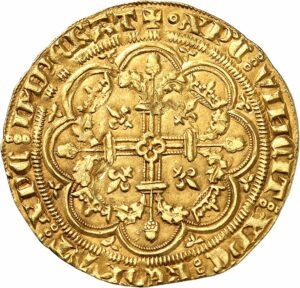 Of course, you will find a large number of great rarities, for example a gold stater of the Parisii, a Carolingian pfennig which might have been minted in Worms, and a selection of large and gorgeous gold coins that were created during the reign of Philip the Fair and during the Hundred Years’ War between France and England. All of the material offered from this era can be described as downright spectacular: for example, the florin d’or that depicts Philip IV of France, called Philip the Fair, sitting on his throne or the couronne d’or struck in January 1340. This denomination was only minted one single time in French history. 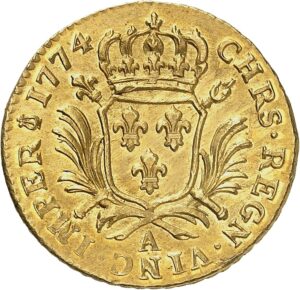 Whether it is incredible Renaissance portraits, such as the images of Henry II on the henri d’or from 1552, or the impressive Baroque images, such as the one seen on the 1701 double louis d’or aux huit L: the amount of interesting coins and medals of extraordinary grade is tremendous.
Both the different phases of the French Revolution as well as the 19th century are also recorded spectacularly well. Anyone who is interested in these eras – whether it may be the Second Empire or the Third, Fourth or Fifth Republic – should also not forget to take a close look at the multiple lots. 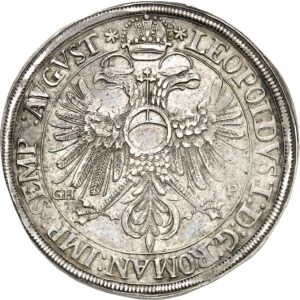 This section includes almost 100 lots of Féodales coins with a focus on the Alsace region. The highlight here is an extremely fine reichstaler struck in Hagenau in 1665 which once was part of the Vogel Collection and the Schwalbe Collection. 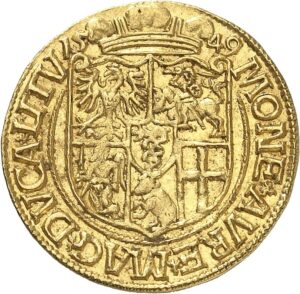 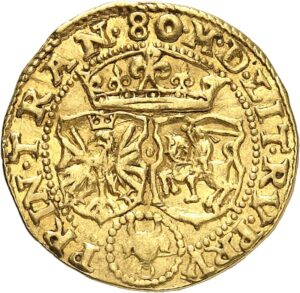 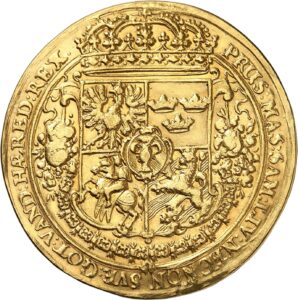 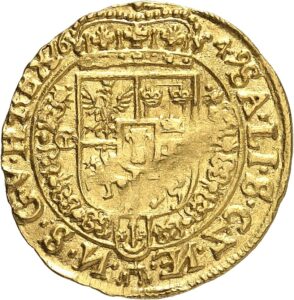 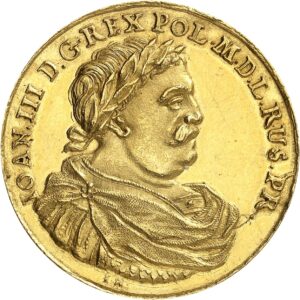 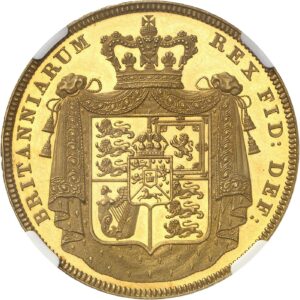 And that is not all Künker has to offer. The entire day of June 27, 2019 is dedicated to gold coins and medals. The auction catalog fittingly starts off with an article Bernd Kluge dedicated to Fritz Rudolf Künker. It contains an updated and expanded catalog of all Berlin ducats of King Frederick William I of Prussia. This makes Auction Catalog 324 a new standard reference that should be part of any library concerned with German coinage. 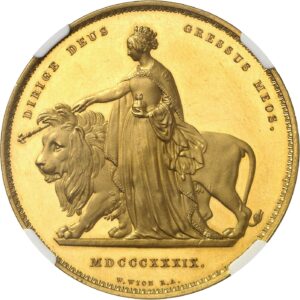 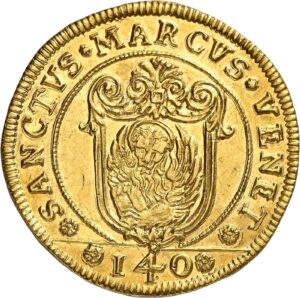 We do, however, want to focus on series in this preview and lovers of Italian coins will find a lot of material here: the Papal States, Sicily – the Middle Ages in particular with a full and a half augustalis -, as well as an extensive series of Venetian gold coins including several rarities. Those are the highlights of the almost 150 lots of Italian gold coins. 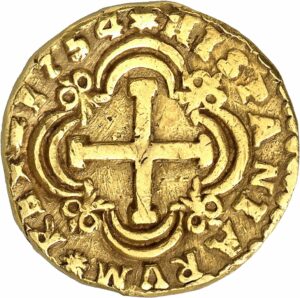 Those who are interested in gold coins from South America are also advised to carefully read through the catalog. Brazil, Chile, Colombia, Mexico and Peru are particularly well represented with numerous 18th and 19th century gold coins. 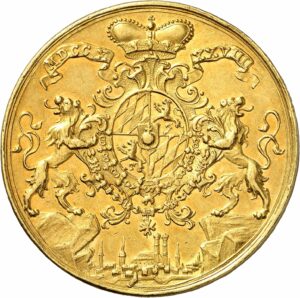 Looking at Germany, this auction, too, will contain many pieces from the Eberhard Link Collection. To be exact, there are large series of Rhenish gold gulden and other gold coins and medals of the cities and dominions in the Middle Rhine region. 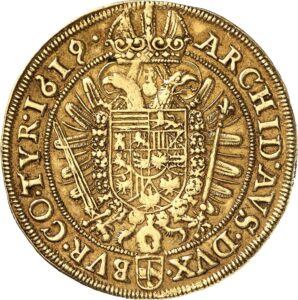 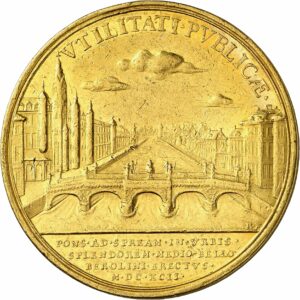 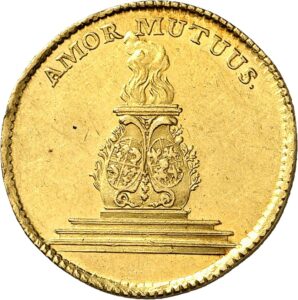 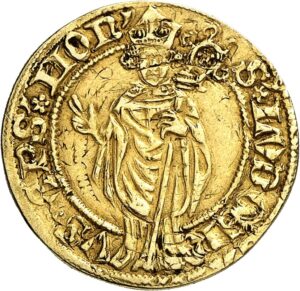 The auction can also be viewed online on the Künker website.

30. January 2020
On 6 February 2020 Auction house Künker will be offering special collections and rarities from various fields of numismatic interest. Watch the highlights of Künker’s eLive Premium Auction 332 in these films.
error: