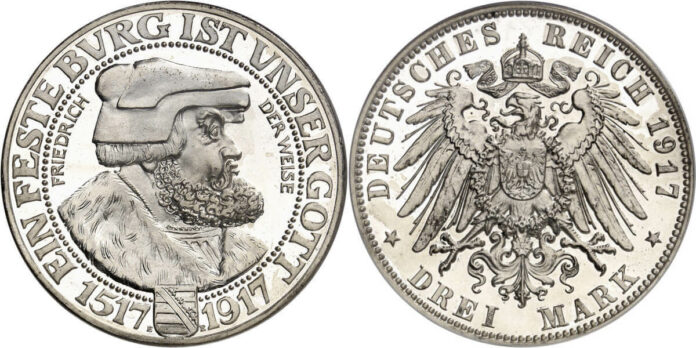 It Does Not Always Have to be FDC…

From 8 to 12 November 2021, Heidelberger Münzhandlung Herbert Grün successfully held its 83th auction sale. It was an auction of the kind most collectors love: a lot of material that people with average salaries are able to afford. And the prices remained at this level – at least most of them.

However, when looking at the results one cannot help but realize: prices of “very fine” pieces have significantly increased too. Indeed, “extremely fine” and “FDC” coins aren’t the only specimens suitable for keeping money safe from inflation. On the contrary. With the rapid increase in prices we are currently seeing in the high-quality range, one should consider the possibility that the market is overheating. Therefore, coins of “normal” quality can be an attractive alternative, especially for those with a lot of knowledge and a smaller budget.

Let’s illustrate this development with an example that we already presented in our auction preview: the taler of Maximilian I Grand Master of the Teutonic Order since 1590. This coin is a “must” for lovers of the art of engraving. On the obverse, it depicts the Deutschmeister in full armour with the archducal hat from the front between the coat of arms and a tournament helmet, on the reverse he is riding his warhorse. In his right hand he holds the archducal ensign, one of the insignia that came with his office.

Four specimens of this coin type were on offer in auction 83. Two pieces were “very fine” but – as is common with these issues – they displayed features that slightly reduced their value such as traces of mounting, gilding or they were smoothed. One piece was a true “very fine” specimen without any restrictions and one specimen was “extremely fine”.

The extremely fine piece climbed from an estimate of 1,000 euros to a hammer price of 1,950 euros – thus almost doubling its estimate. The price of the very fine coin increased too, but “just” by about a third: it rose from 350 euros to 460 euros. The two slightly impaired pieces settled at 250 resp. 260 euros (estimate: 150 euros).

In other words: collectors who do not want to keep up with the high prices of perfect coins should consider purchasing attractive “very fine” pieces instead. Although prices are also on the rise in this field, the extent is not the same as that regarding perfect issues.

Which Prices Have Increased?

Coins from some areas saw more than the about 30-50% increase that we experienced for the overall Heidelberger Münzhandlung sale. These areas have one thing in common: their collector comes from a country with a large pent-up demand because “domestic” coins have mainly been traded on foreign markets for many years. Whether it be countries of the former Eastern bloc or China: for decades, these coins were primarily used to obtain foreign currency.

Thus, all issues minted in the region of the Czech Republic experienced a significant increase in price, especially with regard to the beautiful coins of Czechoslovakia created between the First and Second World War. Due to their minimalistic design and their great rarity, these pieces have become a favourite of the Czech public – and this is precisely what happened at the auction of Heidelberger Münzhandlung. We present two examples: a double ducat of 1934 jumped from 1,000 euros to 6,000 euros; a tenfold ducat of 1933 from an estimate of 12,500 euros to a hammer price of 21,000 euros.

As mentioned above, coins from other time periods saw the same development too. If you are a collector of coins from the Habsburg Empire, you know how much more expensive these coins are if they were produced at the Prague Mint – if you compare them to pieces of the same quality and rarity of course. Heidelberger Münzhandlung offered a large series of coins from the Czech mint of Kutná Hora. The 16 lots had a total estimate of 7,760 euros. The hammer price was more than twice as much: 16,955 euros. The biggest surprise was an extremely rare quarter taler from 1633 minted by Ferdinand II, which jumped from 200 euros to 3,100 euros.

Something similar happened with regard to the issues from the diocese of Olomouc. The outstanding piece was a very fine to extremely fine half taler of Bishop Wolfgang von Schrattenbach minted in 1728. Instead of 200 euros, it sold for 2,250 euros.

Let us take a glance at another region where prices have been on the rise for several years: Hungary. Not one but two pieces realized the 10-fold of their estimate, both of them were of extremely fine or better quality: a 1647 silver coin and a half taler by Maria Theresa of 1771.

A Glance at Asia

It was to be expected that Chinese coins would achieve outstanding results. An extremely fine dollar featuring the portrait of Sun Yat-sen climbed from an estimate of 1,500 euros to a hammer price of 11,000 euros; the pattern from Yunnan was sold for 8,200 euros.

We should also mention that even European medals with a connection to Asia increased in price. For example, a medal commemorating the visit of the first Japanese delegation in the Netherlands realized 280 euros – more than five times its estimate of 50 euros.

Let us take a look at the German States. The most surprising section were the municipal coins of Magdeburg. Nine lots were on offer and had a total estimate of 1,880 euros; the hammer price was 9,220 euros – more than four times the estimate! There seem to be some very committed new collectors in this field.

The surprise of the auction was a golden achievement medal of 25 ducats, which was awarded to a well-known political scientist, the lawyer Dr Conrad Bötzow on 1 April 1909. The piece was unpublished with this legend and had an estimate of 5,000 euros – after a fierce bidding battle the hammer fell at 28,000 euros.

Room for a Further Increase in Price: Coins of the German Empire

Let us end our auction review with a look at the coins of the German Empire, the specialty of Heidelberger Münzhandlung. As always, the only thing to observe here is that there is still room for a further increase in price here – as soon as the international market will start to take an interest in these issues.

A good example is the 1892 Prussian 2 marks piece of which only 181,713 specimens were minted. It is thus by far the rarest 2 mark piece of William II. The “about FDC” coin had an estimate of 750 euros. It realized almost three times its estimate: 2,050 euros. However, this is still quite low if we compare its mintage number to American or British coins.

Same holds true for the rarest silver coins of the German Empire, for the Bavarian “silver wedding anniversary” and, above all, for the Saxon “Frederick the Wise”. The mintage figures of these pieces were very low. There were probably only about 130 pieces of the “Bavarian Wedding”, and about 50% of the 100 specimens struck of “Frederick the Wise” were melted down. Nevertheless, an about FDC specimen of the “Bavarian Wedding” sold for only 36,500 euros; a “Frederick the Wise” in Proof quality for 110,000 euros. This is the price range at which this coin type seems to have settled since Covid, while it was mostly sold for 70,000-80,000 euros before 2019.

It is remarkable that the collector had the piece graded by PCGS and thus made it easier to sell it on the international market. Thus, he took into account that the international investor market might realize soon which possibilities the German top coins of that period offer.

After the Auction Is Before the Auction: Consignments at Heidelberger Münzhandlung

For further information, visit the website of the Heidelberger Münzhandlung.

May, 21. 2020
The 78th auction of Heidelberger Münzhandlung has everything a collector could wish for: from ancient to modern times, coins, medals paper money, literature – as usual with a focus on German coins. Additionally, an impressive selection of rare gold coins will be offered.
error: