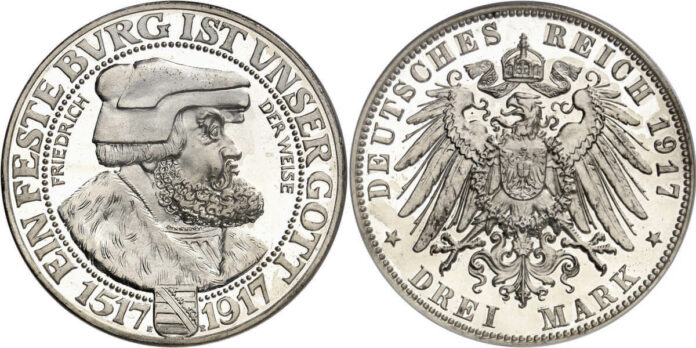 Coins for Collectors From Germany and All Over the World

Every week one reads about new record prices in the numismatic media. And all those who already have a large collection are happy about that. But those who are just starting to build their collection are rather frustrated because not everyone can afford the high prices. If you are looking for coins in the two- and three-digit range, you should carefully study the auction catalogue of Heidelberger Münzhandlung. Herbert Grün offers an extensive collection that looks just like collections used to: the quality of the pieces range from “very fine” to “extremely fine +”, the geographical spectrum from Germany to Europe and overseas. Thus, in this collection you can find a common Bavarian taler next to a Chinese pattern of which just two specimens are known.

Of course, auction 83 also contains – as always with Grün – coins of the German Empire of the finest quality. Just look at the cover piece: Frederick the Wise in proof quality.

You see, there is something for everyone in this auction. It will take place as a Live Bidding Auction at Grün’s premises, which, by the way, is the most beautiful coin shop in all of Germany.

Auction 83 provides collectors with the opportunity to choose the quality they want – or can afford – their coin to be of. A good example for this is a taler by Maximilian I, since 1590 Grand Master of the Teutonic Order and since 1595 Regent of Upper Austria, which included Tyrol and its mint in Hall. Therefore, the 1603 taler was minted in Hall. It is a splendid specimen, and many features of it recall the first talers of Sigismund who was called “rich in coins”. Therefore, the Deutschmeister is depicted from the front standing with the Archduke’s Hat in full armor between the coat of arms and a tournament helmet on the obverse, on the reverse he is riding his warhorse and holds up the little ensign around which his knights will gather. The depiction is surrounded by coats of arms. The specimen is highly interesting from the historic point of view and is also an issue of a very special aesthetic. In auction 83, collectors can choose whether to submit a bid for the almost perfect specimen with an estimate of 1,000 or they can try to purchase one of the three other specimens with estimates of 150 and 350 euros.

Although we present extraordinary pieces of excellent quality in this preview, you can expect to find several dozen of just as interesting and way more affordable lots in auction 83. Like I said, estimates start in the lower two-digit range.

The auction starts with about 80 lots of ancient coins – from Celts to Greeks and Romans to Byzantines. Be it gold, silver or bronze: there is something for everyone. Two Ptolemaic multiple gold coins are particularly spectacular: the two octodrachms feature the portrait of Arsinoe and Ptolemy III.

And lovers of Roman aurei and Byzantine solidi will also find a small but appealing selection.

Coins From Europe and All Over the World

560 lots are from Europe – from Albania to Cyprus. Although every coin metal is represented in this section, collectors will find many crown-sized pieces, both common and rare ones. If you are looking for rare commemorative coins of the 20th century, this auction is something for you too. You can find numerous rarities – from the 2 euro piece “25th Anniversary of the Death of Grace Kelly” to the popular and rare Czechoslovakian 10 ducats piece of 1933 from Kremnica.

Especially the overseas section offers many surprises. The collector obviously also assembled coins from China and the United States, when they were still affordable in Germany. 20 lots are from China, mainly crown-sized coins, but also a rare 10 cent piece from the province of Chili of 1896.

Another remarkable piece is a copper pattern of a dollar n.d., whose mirror-inverted edge inscription GOTT SEGNE UNS (God bless us) proves that the piece was produced in Germany, where many patterns for Chinese coins were minted. It seems to be the second known specimen. A specimen of significantly lower quality was offered at auction house Champion in Macao in February 2010, it had an estimate of $6,000-12,000.

Auction 83 lists more than 90 lots with American circulation and commemorative coins including numerous rarities such as a 20 dollar piece of 1905, of which only 59,011 specimens were minted.

And of course the auction also contains a wealth of lots that are of interest to both collectors and gold investors. An example is a coin set in the original case from Venezuela issued in 1957 featuring leading persons of the Second World War on 18 gold medals, which have a weight of 22.2g each. The starting price of these about 360g of pure gold almost equals the material value and, at the same time, the set is a wonderful testimony to contemporary history.

Almost 500 lots of coins from Habsburg Emperors and Austrian princes are waiting for collectors. Again, most coins are crown-sized, there are pieces of different qualities and prices start at 100 euros. But of course, there are also perfect and rare coins waiting to get a place of honour in a collection. As an example, we show you a taler of Emperor Matthias, minted in 1614 in Kuttenberg.

German States with a Focus on Bavaria

As is always the case at Heidelberger Münzhandlung, the auction focuses on coins from the German States. Almost 3,000 with German coins and medals are on offer. 150 of them are from Bavaria, including a wealth of extremely rare gold coins, for example an extremely rare gold gulden of 1532 minted by William IV and Louis X, and a double Max d’or of the Blue Elector Max Emanuel of 1717.

Rare Coins and Medals from Prussia

Prussia is represented with many extremely rare coins and medals in particular. The offer includes extremely rare pieces such as a double Friedrichs d’or of 1832, a year that seems to be missing in all known collections. Even more remarkable is a gold medal from 1842 weighing 12 ducats. The extremely rare piece was minted on the occasion of the wedding of the Prussian Princess Maria and Crown Prince Maximilian of Bavaria. The Dresden-based engraver Friedrich Anton König created the dies. One year later, he was appointed member of the Prussian Academy of Arts. A coincidence? It certainly was no coincidence that the personification of Borussia holds a victory sign in her hand that is very similar to the one held by Victoria on the Brandenburg Gate. She received this very special symbol only after the Allied victory over Napoleon and thus after her return from exile in Paris.

A Gnadenpfennig of Historical Importance

More than 500 lots are from Saxony. Probably the most spectacular lot is a gold gnadenpfennig with the portrait of Duke John Casimir of Saxe-Coburg (*1564, +1633). Gnadenpfennigs such as this one were given to high-ranking servants as gifts – depending on their position and favor they got heavy gold chains along with the coin to wear it. The provenance of this piece can be traced back to 1903, when the owner purchased it for incredible 400 reichsmarks from the coin shop of Dr Eugen Merzbacher in Munich.

A Lot of Numismatics for Little Money

We want to point out that you do not need to be a millionaire to buy fascinating objects. We will present two examples to prove this:

In 1800, Johann Christian Reich was one of the most successful German engravers. Among other things, he was Prussian and Bavarian court medallist. He lived and worked in Fürth, where he did not only create works of art for powerful rulers, but also for small collectors. For them he issued historical medals made of pewter – the most affordable metal – of which a small series is on offer in auction 83. The example shown here recalls the Treaty of Paris in 1783, which formally ended the American War of Independence and specified that Great Britain recognized the independence of the United States of America.

The second example is a tauftaler (baptism taler) of perfect quality as they were made in Zellerfeld as Christening gifts. Since early modern times it had been customary to give new-borns a coin to take with them on their journey through life. And if you are already thinking about whether there will soon be offspring of your relatives, you should know that auction 83 offers ten baptism talers with estimates between 100 and 400 euros.

At Last a Glance at Grün’s Specialty: Coins of the German Empire

Let us conclude this preview with a glance at the section of coins of the German Empire. Of course, Grün offers in auction 83 some very special rarities that will make a collector’s heart beat faster. Frederick the Wise in proof quality. Who would not like to have this piece in their own collection? 5 marks Württemberg of 1888 in a PCGS holder graded PR64. The specimen meets the highest standards. And there is also a showpiece from Saxe-Meiningen, a 20 marks coin from 1882 by George II in about FDC.

Coins from the German colonies, the Weimar Republic, the Third Reich and the FRG as well as patterns round off the auction, which Grün has scheduled to take place over the course of four and a half days.

Of course, the catalogue is also available online, on the website of the auction house, Sixbid, Biddr and Numisbids.

April, 25. 2019
Heidelberger Münzhandlung is going to auction off spectacular individual pieces in addition to extensive collections of ancient gold coins, French coins and medals, Luxembourgian coins, German talers as well as coins from Brunswick, Notgeld from 1914/1915 and numismatic literature.