July 23, 2015 – As part of its series “National Parks of Hungary”, the Magyar Nemzeti Bank has issued a commemorative coin presenting the Danube-Ipoly National Park. On 28 November 1997, Hungary created its ninth national park, the Duna-Ipoly National Park. Covering an area of 60,314 hectares, the Park includes a variety of landscapes, such as the Pilis (declared a biosphere reserve by UNESCO) and Visegrád mountains, the Börzsöny range, the valley of the Ipoly river between the towns of Hont and Balassagyarmat, the valley of the Danube River with the islands between Esztergom and Göd, and parts of the Szentendre island. It is also part of the EU Natura 2000 nature and bird protection network.

The coin was designed by István Kósa, who presents a stylised depiction of the meandering Danube on the front, along with the National Park’s symbol, the rosalia alpina. A relief of the impressive St. Mihály mountain and Danube Bend is found on the back. A 10,000-forint silver version and a 2,000-forint copper alloy version of this rectangular coin are being issued.

The National Park is home to many species of insects, fish and birds, including the fóti butterfly, the protected moth dioszeghyana schmidtii, the snouted grasshopper and the stag beetle. Native species of water snails (theodoxus danubialis, theodoxus fluviatilis) and rare fish (common zingel, zingel streber and striped ruffe) can be found in the waters of the Danube and Ipoly rivers. Of the National Park’s 191 species of birds, 40 are protected by law. One interesting development is that there are now more and more signs of habitation by Eurasian beavers and lynx, two species which had previous disappeared completely in this region. 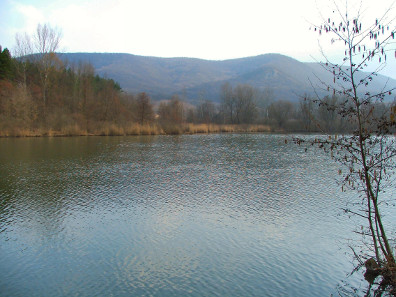 The Round lake in Esztergom, Hungary. Photograph: Wikimedia Commons.

The region is the cradle of numerous cultural values as well. Traces of prehistoric humans have been found in the caves. The area’s most impressive castle is the former royal seat of Visegrád, while the Börzsöny is home to Drégely Castle, an important site in Hungarian history. Fine examples of mediaeval ecclesiastic architecture include the ruins near Pilisszentlélek and the monastery of the Order of St. Paul at Márianosztra. The Park also has local history houses and museums which present the culture and life of the region’s German minority, which was settled in the area in the 18th century.
The emblem of the National Park bears an image of a rosalia longicorn, which is associated with old beech forests as its larvae develop in the rotting wood of dead trees. Its wings are brilliant steel-blue and black, and its long antennae bring to mind a string of pearls. It is a protected species, known as rosalia alpina. The choice of the emblem also symbolises that the mission of nature protection is to safeguard life in all its forms.

For more information on the coin go to the website of the Hungarian Mint.

This is the official website of the Duna-Ipoly Nationalpark.