October 20, 2016 – The Magyar Nemzeti Bank, which is entrusted with ensuring the stability of Hungary’s currency, is celebrating the 70th anniversary of the launch of the forint by issuing silver and non-ferrous collector coins. The last seven decades have seen many changes in denominations, sizes, materials and designs, both in the banknotes and coins, as the currency followed social and economic trends, as well as technological development. The forint banknotes are currently being renewed to integrate the latest anti-counterfeiting technology and promote the safe use of the forint. In line with the Fundamental Law, the coins minted now bear the legend HUNGARY as the latest change of their design. 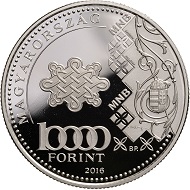 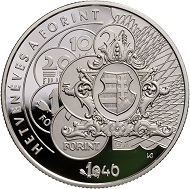 Designed by István Kósa, the coins have identical images and differ only in terms of their denomination and material. The front features elements of the renewed 20,000-Ft banknote, with the micro-script VALUES – PROGRESS – TRADITION – ENDURANCE – STABILITY.

The back shows the denominations of the forint and fillér issued on 1 August 1946, with the so-called Kossuth coat-of arms from the 5-Ft coin as the main motif. The obverse, which bears 2016 as the year of minting, has a background using the signature of Dr György Matolcsy, the current governor of the central bank, while the background on the reverse incorporates the signature of Dr Imre Oltványi, who was governor of the MNB when the forint was introduced in 1946. 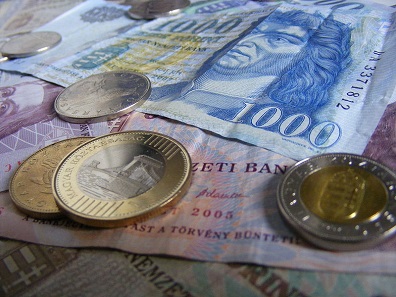 Coins and banknotes of the Hungarian forint.

After the Second World War, Hungary experienced the world’s worst episode of hyperinflation due to the war damage and economic disruption. One precondition for a new start was to stabilise the national currency. The government decided to introduce the new currency on 1 August 1946, as the forecasts for good harvest results and positive news about the return of the MNB’s gold reserves offered favourable conditions to begin the process of stabilisation. The amount of money on the MNB’s opening balance sheet was essentially zero, because the Bank’s holdings of 47 quadrillion peng? in banknotes was equal to 1/100 of a fillér (1 forint was equivalent to 400,000 quadrillion, or 4 x 1029 peng?). By the end of 1946, the central bank had placed banknotes amounting to 968 million forints into circulation, along with 56 million forints in coins.

The name “forint” has deep roots in Hungarian history and was first used around 1325 to refer to the gold coins minted by Charles I (reign: 1308-1342). In terms of its size, purity, design and name, the first Hungarian gold forint was patterned after the gold coins of Florence, the fiorino d’oro, which also bore the emblem of the lily. Thanks to its reliable gold content, Hungary’s medieval gold forint was a recognised means of payment throughout Europe. Under Matthias I (reign: 1458-1490), one gold forint was worth 100 denars. The taller coin, which was used in the 16th century, was originally worth one gold forint and later two gold forints, and thus the half-taller coin was also called a forint. From 1857, the silver forint was used as legal tender in Hungary, until introduction of the korona currency in 1892, when one forint was replaced by two koronas. The korona was followed by the peng?, and in 1946 the decision was made to name the new Hungarian currency the forint, a term that had previously been used for many centuries.

The Magyar Nemzeti Bank website can be accessed here.

To learn more about past and present Hungarian coins, please click here.

And here are 8 things you need to know about the Hungarian Forint.