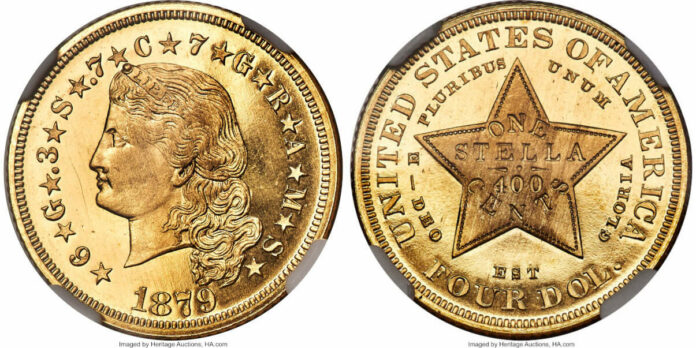 The event continued an extraordinary start to 2022 for Heritage’s US Coins department: the US Coins auction at the January FUN US Coins Signature® Auction climbed to $65,422,650 in total sales, part of the combined $74 million for the event.

“Rare date gold coins soared in this auction, leading the way with strong prices,” Heritage Auctions President Greg Rohan said. “It is clear that scarce date and registry-quality coins are drawing heightened collector interest, with auction prices to prove it.”

Also reaching $174,000 were a 1795 Capped Bust Right Eagle, MS61 and an 1862 Liberty Double Eagle, MS63+. The latter more than doubled the previous record of $78,000, which was set at Heritage Auctions in August 2020. The 1795 Capped Bust Right Eagle is from the first year in which the United States Mint struck gold coins; half eagles were struck first, followed by a delivery of 1,097 Capped Bust Right Eagles. This example represents the 13 leaves BD-5 variety, the last variety struck. It is from an extant population of just 35-45 pieces. The 1862 Liberty Double Eagle, MS63+ is the most elusive Type One Liberty double eagle from the Philadelphia Mint, excluding the uncollectible 1861 Paquet Reverse, and examples in any grade remain scarce. Eight were recovered from the wreck of the S.S. Republic, and another in the treasure of the S.S. Brother Jonathan, but no large hoards have been uncovered; the surviving population in all grades has been estimated at 150-200 specimens, most in the XF-AU range. This specimen is the second-finest certified example at both of the leading grading services, thanks to its Plus and Star designations.

Three coins – a 1932 Saint-Gaudens Double Eagle, MS65, an 1884-S Morgan Dollar, MS64+ and an 1886-O Morgan Dollar, MS65 – drew winning bids of $156,000. The 1932 Saint-Gaudens Double Eagle, MS65 is one of the rarest late-date Saints, frequently in high demand at auction. The extant population has been estimated at 75-95. The 1884-S Morgan Dollar, MS64+ is undeniably rare: most of the 3.2 million business-strike 1884 dollars produced by the San Francisco Mint were put in to circulation. Most of the coins held in government storage likely were melted in 1918, under the provisions of the Pittman Act, meaning relatively few were saved. Uncirculated coins are coveted, and with good reason: NGC and PCGS have combined to certify just 25 examples in MS64 (two in 64+), with only six examples finer.

The 1886-O Morgan Dollar, MS65 PCGS, one of just three graded by PCGS in MS65 (one in 65+), comes from an issue that was not well made. An estimated 2-4 million coins were released into circulation; the majority of the mintage was held in government storage and most of those coins were probably melted in 1918, under the provisions of the Pittman Act. The 1886-O was not well-represented in the Treasury releases of the 1960s, alerting collectors and dealers to its elusive nature in high grade for the first time. Third-party grading has established the 1886-O as a leading condition rarity in the series over the last 35 years.

Other records in the auction included:

Also reaching $78,000 was one of the most intriguing coins in the sale, a 2001-D Lincoln Cent — Muled With a Roosevelt Dime Reverse — MS65 Red PCGS. A mule is a coin struck from mismatched dies. In the lengthy history of the United States Mint, only a few dozen mules are known, and most are unique. Of all mule possibilities in U.S. numismatics, the most likely to occur is the Lincoln cent / Roosevelt dime mule, largely because the diameters for the cent (19 mm) and dime (18 mm) are similar, and each type is from a high mintage. Heritage Auctions experts know of five such pieces; the example offered here is the second known 2001-D cent /dime mule.

Another error coin that yielded an outstanding result was a 1977-D Eisenhower Dollar, MS63, which drew 21 bids before finishing at $26,400. A clad Eisenhower dollar should weigh 22.7 grams, but this example tips the scales at 24.9. It has been reported that about 15 pieces – including this one – are known to have been struck on planchets intended for 40% silver San Francisco Bicentennial Ike Dollars.

All results from the the Long Beach Expo Auction are available online.

For further information, visit the website of Heritage Auctions.

Far From Small Change – Ancient Gold Coins Donated to the...

May, 21. 2020
A lovely story from Christmastime, before coronavirus took over our lives: instead of the usual small change, two ancient gold coins found their way into a red Salvation Army kettle. The coins have now been sold by Heritage Auctions.
error: