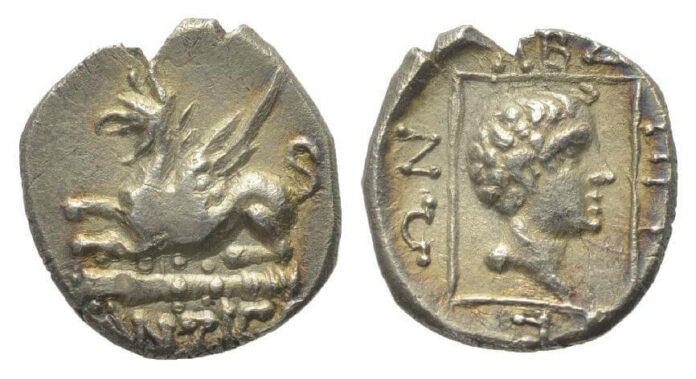 Greek Coins of the Collection Professor Franke at Solidus

In the current Auction 85, Solidus is presenting 652 attractive Greek coins from the collection of Professor Dr. Peter Robert Franke. The auction will be held as live auction on the auction platform AUEX on Tuesday, 21 September 2021, from 4:00 p.m. CEST. Pre-bids can already be submitted. Customers with a Sixbid account can also participate in the auction live via Sixbid.

Professor Franke gained a high reputation for his academic publications concerning ancient numismatics and his opulently illustrated book “Die griechische Münze”, produced together with the Munich publisher and photographer Hirmer made him well known to a broader public. Two obituaries for Professor Franke that appreciate his academic career and achievements can be downloaded on the website of Solidus.

The auction contains some handsome greater silver coins, e. g. Seleucid Tetradrachms, among those an especially beautiful item of Antiochos VIII. Epiphanes, minted in Ptolemais (lot 553). There are also Tetradrachms of other Greek cities or Hellenistic dynasties as well as more exotic pieces from the Parthians and Sasanians. Mention deserve also single items and small series of Drachmas, mainly form the periphery of the Greek world like from the Cappadocian and Parthian sovereigns or from the Indo-Scythian kings.

There are also many silver fractions and bronze coins on offer that obviously have been part of the collection of an academic scholar, who deliberately chose extraordinary pieces from the items offered to him. This is demonstrated by many rarities, partly unique pieces, furthermore by many coins that are in an over average state of preservation for the type they represent. Regarding the silver fractions three samples are mentioned here: a rare Tetrobol from Abdera (Lot 81), an appealing, rare Hemiobol from Kyzikos with a retrograde “K” on the boar protome on the averse and a lion and a panther head on the reverse (lot 248) or an extremely rare Diobol from Teos with the inscription of the magistrate “Apollodoros” in two lines across the Quadradum Incusum on the reverse (Lot 380).

Equally interesting are many bronze coins and a few of them are highlighted below: A bronze coin from Kyme with Artemis and an Amazone on the averse as well as two figures in a Quadriga on the reverse shows two images, that still await a conclusive interpretation (lot 296). An extremely rare coin from Metropolis that is unpublished in the standard literature shows the usual head of Tyche on the averse and a pinecone on the reverse with the name of an unknown magistrate in the left field (lot 351). A typical piece for the selection of Professor Franke in establishing his collection is lot 449: A bronze coin that probably can be attributed to the Lycian dynast Wekhessere (ca. 440 BC). The item offered in this auction has been published in 2001 in the renowned scientific journal Chiron as a unicum and according to the authors F. Kolb and W. Tietz represents the first proof for an early coinage of fractions in bronze by the Lycian dynasts.

Finally lot 632, a coin issued by the Bactrian king Achebios, is mentioned as a representative specimen for the many nice bronzes in over average state of preservation.

You can submit your bids before the auction – or during the live auction, where you can bid on the lots in real time, similar to a floor auction, and thus actively influence the auction process. The live auction starts Tuesday, 21st September 2021, at 4 p.m. CEST.

You can access the auction via the platform Auex and Sixbid.

September, 9. 2021
In Solidus’ Literature Auction 7, 1,531 lots will be offered in various languages. In addition to numerous bibliophile rarities, there are important numismatic standard works as well as rare auction catalogs of important and sought-after collections.