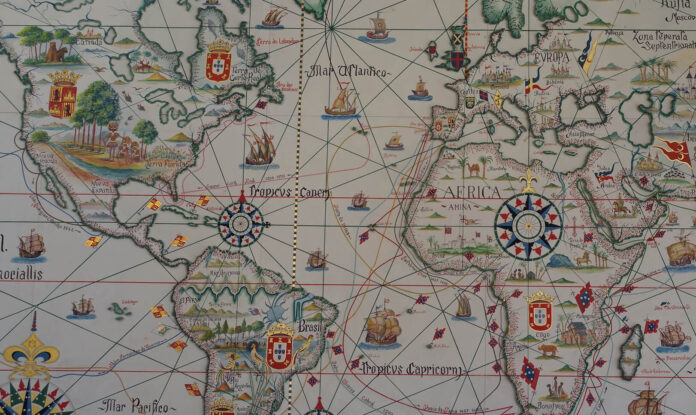 Ask anyone who has been to Lisbon about the city’s must-sees and he is going to tell you “Belem”, for sure. Do not miss the Jeronimos Monastery either! Or the sweet delicacies from the pastry shop next door! And make sure to see the Tower of Belem and the Monument to the Discoveries! Yes, that one definitely is the highlight of any trip to Lisbon!

We had already discovered the day before that we could get on the tram that would take us to Belem, number 15, at Praca do Comercia. We also discovered the greatest breakfast in Portugal. On Restauradores Square itself, you can find a store of a Portuguese chain which mainly offers coffee, pastry and snacks. The Pao de Deus (Bread of God) is divine indeed.

Thus we should have been invigorated and ready to take in the scene at the tram stop of number 15: Thousands of tourists (or what felt like it) were waiting in line to get in. More likely just a few hundred, still the tram had been carrying some 200 people to Belem every 7 minutes since the early morning hours. Plus those who believed themselves to be smarter than the rest and took the bus instead. Granted, they were not as many (some 60 people every 20 minutes) but still enough. Do not forget to count in the taxis and overcrowded car parks and you’ll be able to picture the queue in front of Jeronimos Monastery.

Starting at the gate it made an elegant, more than 1 km-long loop. We decided that we did not really want to the Jeronimos Monastery anyway. UNESCCO world heritage sites are so overrated. The archaeological museum is so much more fascinating, right? The queue here was a short 100 m long. Unfortunately, the fact that the lady at the ticket counter had to explain to every visitor individually that she did not sell tickets for Jeronimos Monastery complicated and prolonged the whole thing. Exasperated, we gave up after half an hour and made for the Navy Museum instead. What could be more fitting for Belem than that?

After all, before Manuel erected Jeronimo Monastery, a Portuguese prince who became famous as Henry the Navigator had founded the predecessor building. He erected a small Lady chapel in the port of Lisbon, from which ship after ship set off to sail into the unknown. The place was named Bethlehem after the monastry – or Belem in Portuguese. In Portugal, Henry the Navigator is known as Dom Henrique de Avis o Navegador, a bit pompous if you ask me. Henry himself had not partaken in many sea travels after all. Neither were these voyages explorations into the unknown, but rather trips to North Africa, Henry’s main area of interest.

Henry was the third child born to King John and his English spouse Philippa. His father entrusted him with the defence of Ceuta, conquered in 1415 in the hope of penetrating deeper into North Africa. Many reasons spoke in favour of such an endeavour. On the one hand, you could get financial support from the Pope by marketing military expeditions into this region as crusades. Secondly, Morocco was known to be incredibly fertile. Last but not least, Europe was experiencing a severe gold shortage at the time. Dealers knew all too well that the sought-after gold somehow made its way from Southern Europe to the trading towns of North Africa. Controlling these commercial centres paid off – hence the military expeditions to North Africa. Still, the great dream of every ruler on the Iberian Peninsula was to locate the sources of the African gold – and bring them under their control.

Locating these gold sources required long sea voyages. And such expeditions had only become possible due to a number of inventions. Fishermen, merchants and pirates had already been using them long before on their journeys into unknown territories. So discoverers could rely on the expertise of experienced sailors and captains. They knew how to use the astrolabe that had found widespread application since the 15th century. They knew the compass from China and from Italy portulane charts and books containing nautical information on landmarks, currents, and harbours.

Moving the rudder from the side to the stern had been a considerable improvement. In combination with a triangular sail, even larger ships could execute fast manoeuvres. Discoverers only needed a 20 men crew to sail their caravels at a weight of 50 tons

John I placed the responsibility for the expansion to Morocco on his son Henry. At the same time, he was entrusted with the administration of the Algarve, a not unreasonable move since it located the prince as close to the events as possible. He settled down in Lagos and assembled a widely known Renaissance court around him where scholars, especially from foreign countries, were welcomed with open arms.

To finance his court and military campaign, the king had made his son grandmaster of the Portuguese Order of Christ, which had emerged from the wealthy former Knights Templar, dissolved in 1312. Thus Henry could dispose of the order’s entire revenue. Too bad that it wasn’t nearly enough.

So Henry sent out his captains to bring in additional revenue. He held many monopolies, on tuna, slaves, gold. Just like it was common practice among private merchants and aristocrats. People must have been feeling the gold rush. They all dreamt of a rich country just behind the horizon that would bring them the business opportunity of a lifetime, rich bankers and poor sailors alike.

Despite these efforts, the conquest of Morocco remained the main objective. In 1437 it failed spectacularly. During the siege of Tangier, the Portuguese army itself ended up under siege. Henry could only save his and his men’s lives by promising to return Ceuta. The enemy kept his younger brother Fernando hostage as security for the return of the city. Henry decided to take the loss of his brother and keep Ceuta. (Thanks to his tragic death, Fernando is today idolised as a holy prince. I wonder if he would have preferred his life to posthumous reverence.)

And of course the Portuguese continued their advance into North Africa. In 1459 Afonso V founded the Order of the Tower and Sword. Closely linked to the order was the legend that Muslim rule of Africa would end once a Christian prince conquered Fes. Accordingly, all aristocrats ready to fight in Africa were accepted into the order. The obverse of the above coin alludes to its foundation.

The Navy Museum creates the perfect atmosphere to indulge in Portuguese power fantasies. On display are for instance treasures recovered from a ship that sank on 15 September 1606 on its way back from Cochin, India. Among the goods are silver coins, tableware and pepper, which was more expensive than gold at the time. Cowry shells were discovered in the wreck of the Nossa Senhora da Luz, which sank in 1615 on its return from Goa.

Accompanied by the ceaseless crying of countless Portuguese infants, we made our way past endless show cases. Apparently, their parents had also decided that the Navy Museum presented the best alternative to the Jeronimos Monastery. Their children, apparently, had decided that the best thing you could do with large halls was play tag or hide and seek in them.

And we decided that we had seen enough navy for the day.

The waiting line in front of the Tower of Belem again was a little bit too extensive for us to bother queuing.

But at least we allowed ourselves to take in the view from the Monument to the Discoveries.

It was built during the reign of António de Oliveira Salazar and it presents the Portuguese past in accordingly heroic images. It was unveiled in 1960 – on the day of the 500th birthday of Henrique o Navigador. Its message was highly political as the monument celebrates Portugal’s former global dominance, whose last remnants were irrevocably fading away at the time.

The more Portugal’s influence was fading, the more the conservative Portuguese held on to their colonies. Angola, Mozambique, Cape Verde or East Timor, to name just a few. For instance, the new Indian government repeatedly tried to claim Goa back after the independence. Lisbon rejected the demand until the Indian army finally marched in and annexed Goa on 19 December 1961. This resulted in cries for war against India from some Portuguese. An interesting proposition when you look at the world map.

Of course you cannot call your visit to Belem complete until you have tried the famous Pastel de Belem. The pudding-filled tartlets made from puff pastry were originally made by the monks of the monastery. Since 1837 a bakery named Casa Pastéis de Belém has been making them. The address can be found in every travel guide, probably the reason why so many tourists were queuing in front of the store. We decided that we could do without the Pastel de Belem. Today, you can get them in every Pastelaria, or pastry shop, in Portugal as Pastel de Nata.

And thus this eventful and tourist-laden third day came to an end. In the third episode, we will take a closer look at the city of Lisbon.

January, 20. 2022
Atelier Brückner completely redesigned Lisbon’s Archaeological Museum. In the new presentation visitors can immerge into 2,500 years of history of this city from the first Punic settlement until the devastating earthquake of 1755. A truly immersive experience!
error: