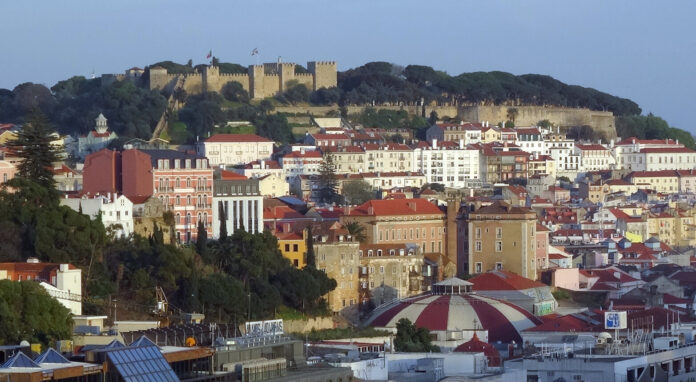 There comes a time when you have to face the truth: You are never going to see the major sights and simultaneously avoid the touristic crowds.

This realisation came to us Easter Sunday, when not a single museum, not even the remotest one, was open. And Monday would not be better. Which meant we had to look the devil in the eye and go into the old town.

The best way to get to the old town is by one of the many cog railways that are going up the various hills. We spotted one that did not have a massive queue lined up and waiting to get in. We bought the ticket and sat, tightly packed next to other tourists from at least seven different nationalities, clinging to our wallets, as the small tram slowly made its way up the hill.

As soon as we arrived on the top, we realised why the queue for this tram had been so short. All there was to see was a small park. The castle that we had set out to see was on another hill. So down we went to begin another climb.

The streets we walked down were not crowded, on the contrary. Plus, we heard more people speak Portuguese in one hour than on our entire day trip to Belem.

Inspired by this refreshingly authentic experience, we decided against taking another crammed train and in favour of doing something for our health. So we walked. Uphill. Or rather we were swimming in the crowds. Gasping for breath, we passed numerous souvenir shops on our way to the cathedral, which, of course, was not open for tourists. After all, the parish wanted to celebrate their Easter Sunday mass in peace and quiet. Still, this only kept a fraction of the tourists away. (We belonged to this fraction.)

Some more gasping and walking later, we arrived at Castle of Sao Jorge. Which is nothing less than the oldest building in all of Lisbon.

It is said that this hill was settled even in prehistoric times. The Romans built a refuge fort here. As Colonia Felicitas Iulia it served as a reminder of Caesar’s victory over Pompey’s troops. The Arabs, too, made the castle hill the centre of their city. At the time, Lisbon was one of the most important harbours of the Caliphate of Cordoba and a high-ranking military target that was only conquered by Afonso Henriques in 1147. That is why he got a memorial on the castle’s central viewing balcony in the 1930s.

The conquest succeeded thanks to an army of Christian crusaders on their way to the Holy Land. While the First Crusade had mainly been undertaken by the lower classes, Saint Bernard of Clairvaux and his speeches had moved the entire elite of the Christian aristocracy, including the kings of England, France, and Germany (not to forget the infamous Eleanor of Aquitaine) to go on the holy mission.

And 164 ships of this fleet, laden with Norman crusaders, lay anchor in Porto in 1147. Afonso Henriques promised to let the knights plunder the city to their hearts’ content if they helped him conquer Lisbon. It took them several months, but after the Moorish garrison had surrendered the city to the Christians, the latter were able to hold the city without problems or loss. And because the opportunity was favourable and the offer lucrative, they conquered the Moorish castles Sintra and Palmela as a bonus. An Englishman named Gilbert of Hastings was appointed Bishop of Lisbon and a few crusaders, who believed they had done enough for the cause, settled in Portugal. The others sailed on to the Holy Land, where they achieved – absolutely nothing. This left Saint Bernard of Clairvaux horrified and blaming the Pope for the failure of the crusade as a punishment for the sins committed by the Christian knights. If you say so, Bernard …

Of course the Castle of Sao Jorge was not always as well preserved as it is today in its 900 year-old history, on the contrary. Before its restoration – or rather reconstruction – in the 1930s, it was in ruins.

The reconstruction plan belonged to a number of measures taken by Antonio Salazar in the name of his political mission to turn the capital of his “New State” into a modern city, while at the same time acknowledging the past victories it was built on. A Christian castell that had been taken from the Moors was of course a wonderful addition to this political agenda.

Most contemporary visitors do not think about these things, I guess. After all, it all looks very medieval. Only very stubborn historicists wonder how little people today are aware of how much our notion of the past is influenced by the nationalism of the interwar years.

Be that as it may, the view could not be more beautiful.

And the newly built exhibition hall even has excavated coins! Or rather coin fragments. They are pieces of dirhems issued in the Caliphate of Cordoba or by the Almoravids.

This is roughly what the coins should have looked like when they were still whole.

Most visitors cared very little for the coins. The majority was more interested in the peacocks, which were sitting in trees everywhere, and their husky calls. And we agreed that a sunny Easter Sunday afternoon should best be spent on a sunny rooftop terrace with a refreshing cocktail.

We were up at the crack of dawn to organise the continuation of our journey to Evora. We found Orient station in chaos when we got there. Only one counter was open and it had an endless queue in front of it. On top of that, a uniformed woman showed up, who took the queuing one by one and led them away somewhere. When it was our turn, we were delighted to find out that the lady spoke English. She informed us that the train conductors were on strike today. Tomorrow? Tomorrow everything would be back to normal. What a relief! So we bought our train ticket to Evora and took off to look for the Oceanarium.

You must know it was raining cats and dogs. And the Oceanarium, one of the biggest aquariums in all of Europe, was the only tourist attraction with a roof that was open on this holy Easter Monday. So it was not much of a decision. To see the aquarium, we had to get to the former grounds of the Expo ’98 first.

What remains from the Expo looks fairly bleak and should be showed to all city fathers before they decide if they really want to host the next Expo in their city.

Together with what felt like several hundred tourists, we squeezed ourselves in one of the seemingly never-ending queues in front of the Oceanarium’s ticket counters, only to be shoved into an equally overcrowded aquarium. You are asking why there were not more people in this beautifully decorated hall with contemporary tiles? It is simple: Because it did not lead to the aquarium but only to the washrooms.

I have never been in and out of an aquarium this quick in my life. (We would have been even faster had we not stumbled over so many strollers in the dark.) In front of the tanks you had to fear for your life. There were the children who were crying blue murder because they could not reach up to the tank windows. There were the mindless backpack-wearing morons turning left and right and hitting your sensitive body parts with their stuffed, hard, giant, backpack-monsters.

To cut a long story short, we had seen enough of paschal Lisbon. Honour bright! We will come back but never ever on an Easter weekend.

Our next episode will lead us to the city of Evora, a UNESCO World Heritage Site, where we will not only find Roman temples and a Gothic cathedral but also a coin collection.

Global Power Portugal Part 3: Lisbon, the Earthquake, and Doubts About...

March, 25. 2020
In her latest travel diary, Ursula Kampmann discovers Portugal, the nation of explorers and seafarers. The third episode tells of the tourist-laden Lisbon, whose architecture still shows traces of the 1755 earthquake that caused philosophers to question the existence of a benevolent God for the first time.
error: