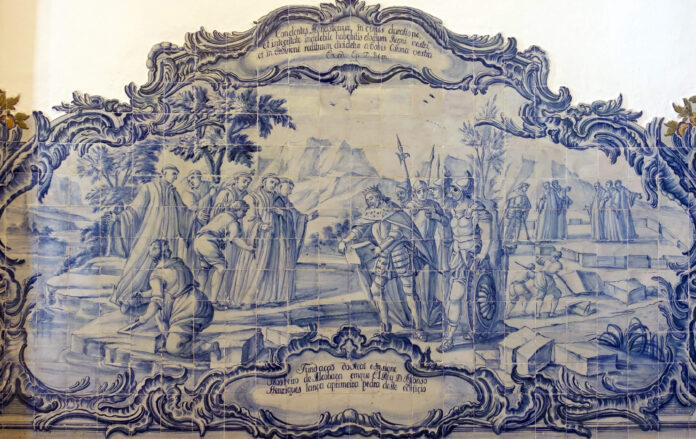 Portugal is more than the Algarve and vino verde. Portugal is a country with an extremely complex history. Part of this history is a brutal dictatorship which only came to an end in 1968. The Swiss novel “Night train to Lisbon” successfully revived this episode in the collective memory of the broader public. Portugal itself, however, bears traces that leave a much deeper impression still …

Portugal is always full of surprises. It was a rainy day when we took off that morning. We reached Alcobaca on country roads passing through nothing but villages. What is praised in every guide book as the epitome of Gothic architecture and the most significant monastery of the Middle Ages on the outside pretends to be the most beautiful baroque.

The Alcobaca Monastery is closely tied to the life of Bernard of Clairvaux. About whom one could say a great many things, although not many would be good things by modern standards. He was probably one of the biggest zealots produced by the High Middle Ages, a zealot who, with his hatred of everything non-Catholic, had an Abelard confined to a monastery as a heretic and therewith really got the Second Crusade moving.

Which, as we all know, did not exactly end in fame and glory. Previously, another Cistercian friar had initiated the persecution of Jews in the Rhineland. To make things worse, the German Emperor Frederick Barbarossa drowned in the Saleph. King Louis VII of France got into a fight with his Eleanor of Aquitaine. And the attempt to conquer Damascus, actually an ally of the crusaders, but a rich and rewarding target, failed on top of that. Bernard was depressed. God didn’t will it. (Of course that was only because the crusaders had sinned as horribly as he put it in his apologetic letter to the Pope.) Bernard suffered under the accusations that were being laid against him for initiating this failed crusade. For that, in turn, Afonso Henriques pitied him. After all, the crusade had done Afonso a lot of good. On his behalf (and in exchange for a share of the booty), the knights of the Second Crusade had taken Lisbon and a few other things here and there. So the Portuguese king was enormously grateful to Bernard of Clairvaux and his efforts in the matter of religious war. As a token of gratitude towards Bernard, and to remember his victories over the Moors, he founded a large Cistercian monastery in Portugal in 1153, shortly before Bernard’s death.

The Cistercians came and construction works of the monastery began in 1178. Now, the Cistercians were not just any monks. Despite their pretty humble attitude in personal matters, they reformed pretty much everything they came in contact with. They introduced new agricultural technologies, bought property after property that was up for sale and became rich doing so. Really, really rich, which shows in their architecture until today.

On first entering the church, we were amazed that so few baroque elements were integrated in the walls of the building. Today, visitors seem to like it. In the beginning of the 19th century, however, the Cistercians were not at all amused, I take it, when Napoleon’s soldiers pillaged their monastery, cracked open the sarcophagi and burned the church’s interior. The revolutionary troops did not even stop at the church’s important religious and emotional treasures. In this case, we are not talking about relics, but about the sarcophagi of two people who lived a love that should have been impossible in the Middle Ages.

Ines de Castro was the illegitimate daughter of a Portuguese nobleman, a woman who did not quite belong to the aristocratic circles, but kept watching them from a distance. At court she was taken into the service of the crown prince’s wife as one of the higher-ranking maids. She must have been attractive because the husband, Pedro, immediately fell for her. Of course his father, Afonso IV, was anything but enthusiastic about this. Especially not after the death of the crown prince’s wife. Pedro wanted his Ines. And his father a legitimate heir to the throne in his grandson’s generation. The two wishes were incompatible, so Afonso decided to order Ines’ death.

Her royal murderers are said to have decapitated her in front of her children. Pedro was heartbroken. Not only his feelings but also his honour as crown prince had been deeply offended. After he succeeded to the throne in 1357 as Pedro I, he gave the order to murder the assassins by having their hearts ripped out of their bodies – just like the assassins had once ripped out his by executing the contract kill. That was at least the official justification for the punishment. Not unusual for the Middle Ages though, as the punishment was often intended to resemble the deed committed as closely as possible.

Pedro claimed that he had married Ines (proof other than his word was non-existent), and that the children from this marriage were conceived in wedlock. This caused much trouble after his death when his only (legitimate) son died rather young and childless, and all of a sudden all there was left were illegitimate or perhaps legitimate descendants. The successful contestant for the throne among these was not one of Ines de Castro’s sons but Joao I, who had been conceived a year and a half after Ines’ death.

Anyway, in Portugal every child knows the love story between Pedro I and the beautiful Ines. Which is why tourist party after tourist party hastened through monastery and minster, where the story of Pedro and Ines is being told in English, German, even Japanese, and also, of course, in Portuguese. And on we went, to the Cloister of Silence. Only it was not silent in there.

When we entered the cloister, we heard a sweet melody from the chapter house. Together with a German travel party we listened in awe as the singer delighted us with several soprano show-pieces in the falsetto voice of a baroque castrate. Beginning, of course, with the indispensable Ave Maria.

The group tipped well and left. We also tipped and sat down in the cloister to soak up the atmosphere. Until the next group approached on fast heels to be delighted with another Ave Maria. After the fourth group and the fourth Ave Maria I was ready to double my donation if only the artist would have stopped repeating this cheesy Ave Maria.

We threw a quick glance into the kitchen with its enormous chimney on four iron feet and the large fish tank that was once filled with water from the nearby Alcoa River, a pre-industrial version of cold running water …

Not to forget the gigantic dormitory, in which the monks were sleeping together. Partition walls for individual cells were not built in until the 16th century.

And then we left Alcobaca to continue our way to Peniche.

Today Peniche is a pretty peninsula with a popular sand beach, where tourists do what they usually do at sand beaches.

In most cases, they will be much too busy to visit the Fort of Peniche that was built in the end of the 16th century to defend the peninsula against pirates. And save themselves a lot of trouble. Trust me, a visit to the Fort’s museum can make you seriously question your belief in mankind.

In Portugal the Republic was proclaimed in 1910. For 16 years the advocates of democracy had tried to establish a functioning state apparatus. They failed. On 28 May 1926, Portugal’s first attempt at a democracy ended in a coup d’état, which ended in what went down in Portuguese history as Estado Novo. So the first Portuguese republic had, after all, lasted one year longer than its German equivalent, the Weimar Republic.

Imagine the Estado Novo as a military dictatorship led by a former economics professor. Antonio de Oliveira Salazar had been named minister of finance in 1928. He had postulated and received full autonomy of action with regard to the state finances. Soon Salazar controlled not only Portugal’s finances but therewith also the nation’s entire political affairs.

In 1932 he became Prime Minister. In 1933 Portugal was given a new constitution which included only one party, namely his own.

Censorship of the press, abolition of the right to strike and the right to form parties, plus a secret state police called PIDE, which unscrupulously murdered and tortured: Salazar instated an absolute reign of terror in Portugal. That his dictatorship is not referred to as “fascist” but as “conservative-authoritarian dictatorship with clerical-fascistic characteristics” should hardly have interested his victims.

Salazar managed to stay out of World War II so that Portugal got to keep its colonies. When European hegemony came to an end in the 1960s, Salazar was unwilling to accept that. The Angolan War of Independence became particularly famous for its brutal nature.

In 1968 Salazar suffered a stroke. His successor, Marcelo Caetano, also was a professor, though this time at the faculty of law. He was chased out of the country in 1974 during the Carnation Revolution.

During all those years Peniche served as a prison for political prisoners. The inmates lived in the building’s catacombs, which were sometimes flooded with up to a meter of sea water during flow. Peniche was made famous by the break-out of Alvaro Cunhals, at the time chairman of Portugal’s Communist Party. He had spent eight years in the Fort of Peniche before he successfully escaped on 3 January 1960. A guard was secretly working for the Communists and etherised his colleague. The escapees climbed down some 10 meters on a rope before they jumped – still from a considerable height – into the ice-cold sea. It was January. They had only minutes until the freezing cold water would kill them. Still they jumped, in the hope that the fishing boat would wait for them as promised. And really, the fishers of Peniche had kept their word and the escape succeeded. The plan of the escape route is still kept in the museum today.

We had originally planned to visit the medieval fort Obidos. Whether it was the mussels from lunch or the stories from the Fort of Peniche, I felt sick. Plus, it was drizzling. And while we started driving, the drizzle turned into a downpour. So we returned to Batalha, a little less light-hearted than we had left it in the early morning.

In the next episode you can join us when we travel to the Roman town Conimbriga and to Aveiro, praised by its tourist office as the “Venice of Portugal”.

By the way, we have to set a detail right. Although Cunhal’s escape from Peniche was dramatic, the escapees did not jump into the water but were awaited by cars. This was an information supplied by Jürgen Strohmaier, co-author of the DuMont travel guide to Portugal.

March, 26. 2020
In her latest travel diary, Ursula Kampmann discovers Portugal, the nation of explorers and seafarers. The fourth episode takes you right into medieval Lisbon. The best place to start is the castle hill.
error: