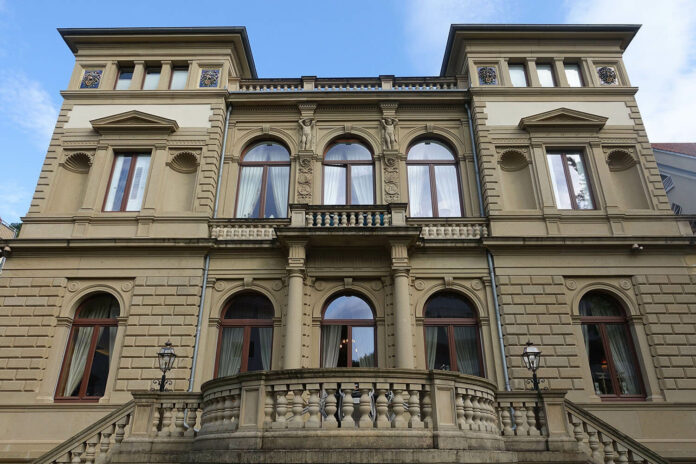 It isn’t difficult to determine which coin shop is the oldest, the largest or the one that holds the most auction sales. But the question as to which coin shop one considers the most beautiful one is completely subjective. My personal favourite is Heidelberger Münzhandlung: Herbert Grün decided to house it in a beautiful historicist villa. Of course, there are a lot of splendid historicist buildings in Heidelberg. But one thing makes this villa stand out: the entire interior has been left intact to this day. Thus, at Heidelberger Münzhandlung we can admire an ensemble that a wealthy Heidelberg citizen had installed in the 19th century.

Heidelberg as a Centre of Romanticism

It shouldn’t come as a surprise that such a building was erected in Heidelberg of all places. After all, Heidelberg is considered the cradle of German Romanticism. The castle ruins left behind by Louis XIV after his devastating campaigns became some sort of place of pilgrimage. All major Romantics came to Heidelberg at some point: Hölderlin, Brentano, Tieck, Eichendorff, Jean Paul and others raved in their letters and works about the uplifting thoughts that overcame them in the face of the lonely ruins towering over them.

The ruins inspired an entire generation of enraptured spirits to long for Heidelberg. At first, only those who had a lot of money and could afford the journey came to Heidelberg. Then the railroad was built and, for the first time in history, something like a foretaste of modern mass tourism became possible. In the area around the railroad station alone, resourceful entrepreneurs built large and comfortable hotels in the decade after 1850. Of course, cafés, inns, boarding houses and magnificent villas also sprang up in order to accommodate Heidelberg’s upper class, which had made their fortune with the Heidelberg boom. How famous Heidelberg was in the second half of the 19th century is illustrated by the fact that Mark Twain spent several months there during his second trip to Europe.

If you want to learn more about the fantasies 19th-century visitors associated with Heidelberg, you have to see the American operetta “The Student Prince” from 1924 or the 1954 movie adaptation. It was very successful in the United States and still dominates the image many visitors have of Heidelberg.

And Heidelberg benefits a lot from that. It already did so in the 19th century. After 1850, the city became a place where the rich and wealthy enjoyed their lives. And they had appropriate villas built for this purpose.

Heidelberger Münzhandlung is located in one of these villas. What’s special about the building is that it still has the entire original interior. Whereas the interiors of many other 19th-century buildings were destroyed or repainted by their owners in the course of the 20th century because they were considered old-fashioned or even kitschy, all stucco works and paintings of Gaisbergstraße 40 are still intact.

Herbert and Susi Grün had the villa renovated in an exemplary manner in collaboration with the State Office for Monument Protection, which is why I consider Heidelberger Münzhandlung one of the most beautiful, if not the most beautiful coin shop in Germany. Here you can see a few pictures and details of the building that fascinate me.

If you know or even own a more beautiful coin shop, write us and send us pictures. We would be glad to present the shop at CoinsWeekly!

Here you can find the website of Heidelberger Münzhandlung.

To understand the full meaning of the famous drinking song from “The Student Prince” you have to remember that prohibition was in force in the United States back then! And afterwards, listen to the timeless student anthem Gaudeamus Igitur – in the United States, this song did not become as tremendously popular as it is today until the 20th century.

April, 25. 2019
Heidelberger Münzhandlung is going to auction off spectacular individual pieces in addition to extensive collections of ancient gold coins, French coins and medals, Luxembourgian coins, German talers as well as coins from Brunswick, Notgeld from 1914/1915 and numismatic literature.
error: