February 28, 2019 – At the High Security Printing Asia in Hanoi, the new 1000 Thai Baht banknote from the 2018 Thai banknote series 17 was awarded the Regional Banknote of the Year Award Asia and the new Hong Kong Series from 2018 the Best New Series Award. Both currencies are equipped with security features by Louisenthal, one of the main criteria for the awards. The awards recognise “outstanding achievements in the design, technical sophistication and security of a banknote or banknote series”.

All of the Thai banknotes feature an image of King Maha Vajiralongkorn.

The main colour and size of the 1000 Baht note hasn’t changed, but it has been enhanced with security features to facilitate authentication both by systems in the cash cycle and by the general public. In the Hong Kong series, the reverse sides have been designed in portrait format, a feature that distinguishes them from the current series. 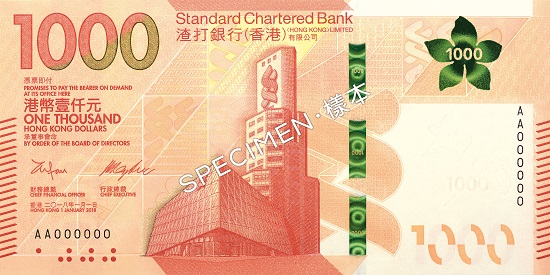 One side of the 1,000 HKD banknote depicts the Standard Chartered Bank building.

Both currencies display Louisenthal’s Galaxy® security thread with the dynamic “Saturn” effect. Galaxy provides an optically variable surface based on micro-mirrors and ColourShift thin film layers. When tilted in any direction, rings and arcs travel along the thread surface and imitate a three-dimensional space by changing their relative positions. Additionally, a well-defined change of colour from green to gold on the Thai baht note, and from green to azure on the Hong Kong notes, can be observed while tilting. In transmitted light, demetalized text elements can be observed. The thread is equipped with machine-readable magnetic properties. Both currencies feature tactile marks for the visually impaired.

“We are very proud that both the Hong Kong Monetary Authority and the Bank of Thailand decided to use Galaxy as the note’s main security feature. The use of ColourShift together with micro-mirrors in our Galaxy thread exponentially increases banknote security”, stated Clemens Berger, Chairman of the Board of Louisenthal.

The Bank of Thailand issued its new “Series 17” set of banknotes in 2018. The 20, 50 and 100 baht banknotes were released on Chakri Memorial Day, April 6, 2018. The 500 and 1,000 baht denominations were issued on the new king’s birthday on July 28, 2018, featuring a portrait of His Majesty King Maha Vajiralongkorn Bodindradebayavarangkun in his Royal Thai Air Force uniform. The designs on the reverse of each denomination of the “Series 17” show the portraits of two Thai Kings in order of reign from past to present, along with images of their regalia.

The lower denominations of the Hong Kong series, the HK$20, HK$50 and HK$100, will be brought into circulation between 2019 and 2020. Both the front and the reverse side represent various iconic aspects from Hong Kong’s nature and culture; the reverse side in portrait format.

For more information about Giesecke+Devrient, visit the company’s website.

If you’re also interested in the history of Thai coinage, you can find an interesting article about it on CoinsWeekly.