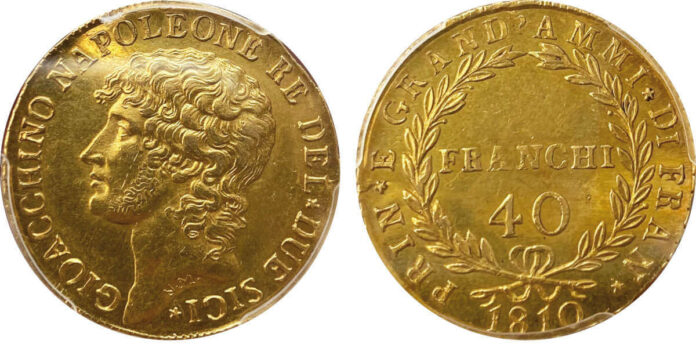 Over the last years, the Gadoury auction at the end of October has established itself as a world-class numismatic event. The special flair of Monaco and its always sunny weather make visiting a Gadoury auction in person a special highlight – although live bidding from your home computer is obviously possible too. Since Francesco and Federico Pastrone, the owners of Gadoury, are well aware that many clients are unable to travel to Monaco, they made sure that nearly all of the more than 2,000 lots on offer were graded by PCGS or NGC.

The material on offer ranges from ancient to contemporary coins, covers all five continents and includes rarities, even from exotic, rarely offered countries. The focus is, as to be expected with Gadoury, on France, Italy with the Casa Savoia and Monaco. But, as said, the catalogue offers something that will surprise and delight every connoisseur.

Coins from the Ancient World

The auction starts with some banknotes, then 238 ancient coins will be on offer. If you love coins from the ancient Mediterranean world, you will be thrilled about all the pieces with excellent grades. As an example, we will only mention an extremely rare sela from the first year of the Bar Kokhba revolt – considering the issue, it is a piece of unusually great quality. If you love provenances, you will certainly be interested in a gold octodrachm minted by Ptolemy III for Berenice II.

Next are Roman and Byzantine coins with numerous exceptional aurei, many interesting denarii and a series of sesterces in splendid condition. A brief glance at the catalogue demonstrates what Roman engravers were capable of when it came to creating realistic portraits. An example is an aureus of Macrinus, whose provenance can be traced back to the 1960s. Lovers of the late Roman period will rather be interested in two aurei of Constantine I in perfect condition, whose style is already coming close to the standardized portraits of Byzantine coinage. Which brings us to this section in which any specialized collector will spot interesting pieces due to rare mints such as Jerusalem, Carthage, Syracuse and Ravenna, rare denominations such as semisses and rare rulers such as Irene and Avars.

As a specialist for coins from Monaco, this Gadoury auction obviously offers a wider range of coins from the principality. The top piece is a unique demi-écu or 30 sols from 1643 of historical importance: it is the only known specimen of Prince Honoré’s first issue struck according to French models, which can otherwise only be found in literature.

China and the Far East

Number 335 takes us to world coins and medals. As always, Gadoury offers an extremely broad range of exotic nations with numerous gold coins, which are of interest to both collectors and investors. Especially from the Far East there are many rarities, for instance from Indochina, Indonesia, Cambodia and South Korea to name but a few. A good example are two Chinese commemorative coins of 500 yuan weighing 5 ounces. The pieces, which were issued in 1993 and 1994, depict parts of the Chinese Wall. Only very few specimens were minted: 99 pieces of the 1993 coin; 76 pieces of the 1994 version. Thus, these are rarities of contemporary Chinese coinage.

400 Lots with French Coins and Medals

Do you collect coins and medals from France? In that case, this catalogue is compulsory literature for you. It offers a broad range of French coins from the Carolingians to 2014. It contains many a splendid gold coin from the time of the Hundred Years’ War. But there is also a lot of material from the French kings after Louis XI including gold coins from rare mints. Another highlight are three double louis d’ors from the mints of Paris (1691), Rouen (1710) and Bayonne (1712); all of them graded AU58.

Napoleon and His Empire

Also in this auction, Gadoury is able to offer something special to all those who are interested in Napoleon. Whether coins or medals, prior to the emperor’s coronation or afterwards, whether Napoleon himself or his brothers respectively brothers-in-law, whether Egypt, Italy – from Italy alone there are 67 lots (!) – or the Netherlands, Gadoury is always the right place to go when you are looking for issues related to Napoleon. We will illustrate this by means of three examples: The first is one of the medals that Napoleon had created to document his achievements. It is dedicated to the construction of two wooden bridges near Avignon. The raging Rhône had torn apart even stone bridges, which is why they decided in 1660 to stop building bridges across the river. Napoleon’s engineers built two wooden bridges starting in 1806, which at least endured until they were replaced by new constructions in the 20th century.

The second example is spectacular too: Gadoury is able to offer two varieties of the extremely rare 40 franchi piece of 1810, minted by Joachim Murat, successful Maréchal, brother-in-law of Napoleon and since 1808 King of Naples: the piece shown here features the mark NM, the others do not. Both form part of a little series of coins minted by Joachim Murat. Some of the pieces are of outstanding provenance, including the collection of the Egyptian King Farouk.

Our third example is from the Netherlands. There, Napoleon’s younger brother Louis held the office of King of Holland between 1806 and 1810. To the surprise of both his subjects and his brother, “Lodewijk” sided with the Dutch, which led finally to Napoleon’s annexation of the country in 1810. In that very year, an extremely rare 20 gulden piece was minted.

From France, the catalogue takes us to Gabon and Georgia, and then to Great Britain. In this section, connoisseurs will find late medieval and early modern gold coins. Two 5 guineas pieces from 1669 and 1681 featuring the portrait of Charles II are particularly spectacular.

Even rarer is a pattern for the 2 pound piece by George III from 1820. The reverse was created by Benedetto Pistrucci in 1817. It is said that there are 60 specimens of this pattern; this piece is from the Hayleigh Collection.

380 Lots from Italy and a Special Collection Savoy

Italy and the ruling house Casa Savoia is also among Gadoury’s specialties. Thus, this auction also offers a wealth of Italian pieces from early medieval times to today.

An impressive example is a multiplo of 12 tari, minted by Charles I of Anjou in Messina. It depicts him as a fighting knight on horseback. This coin represents an extensive series of coins from southern Italy, minted in Messina, Naples or Palermo. The material covers the time frame from the Middle Ages to Spanish rule.

55 lots are from the Serenissima of Venice. The time span ranges from a Carolingian denarius of Charles the Pius, which NGC refers to as the best-known specimen, to a series of coins from 1848. Experts of Venetian coinage can look forward to great rarities such as a zecchino of the Doge Francesco Contarini (1623-1624) and a multiplo of 12 zecchini by Alvise Pisani (1735-1741).

Let us concluded our journey through Italy with a glance at the issues of the Casa Savoia. Gadoury is able to offer 217 lots of them in this auction. Whether it be Middle Ages, early modern times or issues of the 20th century – connoisseurs will find rarities across all areas. Prices range from three-digit to six-digit figures. We show you three spectacular examples – one for each epoch: The Middle Ages are represented by a fiorino d’oro by Amadeo VI (1343-1383), the first gold coin of Casa Savoia; a carlino of 5 doppiette, minted by Vittorio Amadeo III in 1773 for Sardinia, is an example for early modern times; coming to the 20th century, it is difficult to choose one of the many impressive rarities as representative. We decided to go with a 100 lire piece of 1927, of which only 30 specimens were minted; they are part of a series with 10, 20 and 50 lire pieces of the same year – all of them with such a small mintage.

Of course, this is not the end of this Gadoury auction sale. Rarities of a kind that one hardly ever encounter are also on offer in other areas. Thus, several Russian showpieces from the Charles Baird Collection, including one family ruble, are on sale. From Sweden there is a quadruple ducat by Carl XIV, minted in 1837 in Stockholm.

Rarities from the United States

Thus, take a close look at the catalogue. And consider going for a brief vacation to enjoy the sunny October in Monaco to visit the Gadoury auction.

You can find the catalogue online at the Gadoury’s website, on Sixbid and Numisbids. Of course, it is also possible to bid live on your computer at home via Biddr.

October, 10. 2019
On 15 and 16 November 2019, the Gadoury auction offers something for every collector – at the highest level: From the finest ancient coins to coins from all over the world and to the second part of the spectacular collection of a gentleman from the House of Savoy.