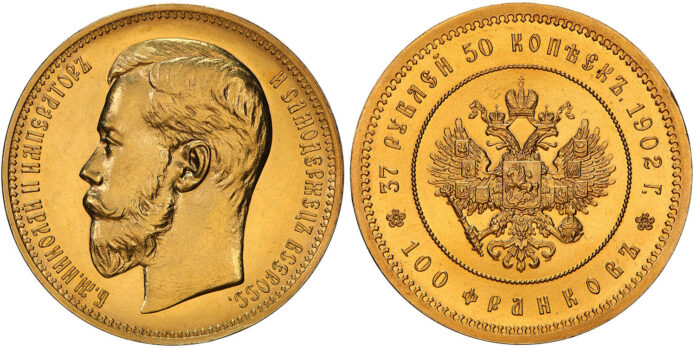 Gadoury 2020: Gold Coins from all Countries and Epochs

On 30 and 31 October 2020, Éditions V. Gadoury’s annual auction takes place at hotel Le Méridien Beach Plaza in Monaco. Already for the third time, one of the highlights will be the impressive collection of a “Gentiluomo di Casa Reale” with coins and medals from the Casa Savoia. Moreover, the auction covers the entire numismatic range from ancient to modern times. Experts will find exquisite coins, some with provenances that can be traced far back. And also those interested in issues of the 20th century can look forward to a wealth of rarities of a kind that cannot be found on the market often.

The auction starts with a small series of 100 lots of paper money, almost half of them from China. All pieces were graded by PMG or PCGS. In terms of issuing dates, the focus is on banknotes from the first half of the 20th century, however, the offered items also include one of the world’s earliest banknotes from the Ming dynasty.

Lovers of ancient numismatics can look forward to a small but impressive selection of coins. Whether Greek, Celtic or Roman issues, the connoisseur will spot outstanding pieces with impressive pedigrees. A good example is the popular incuse stater from the city of Caulonia featuring an archaic Apollon, in front of him a deer. The first occurrence of this specimen dates back to 1924, when the Bement Collection was auctioned off by Naville.

After a few Celtic issues, including the famous stater of the Parisii featuring the stylised head of Apollon and a horse, one can find the section of Roman coins. Actually, there are only 35 lots. However, anyone interested in rarities of excellent quality should definitely take a look at them, and the fact that a perfect quadrigatus from the Niggeler Collection is on offer isn’t the only reason to so.

You can bid on one of the rarest coins from the time of the Republic, Crawford 482/1, a denarius of Julius Caesar, of which only a few pieces have survived. It features the head of Venus on the obverse, a trophy of Celtic weapons on the reverse, and due to its extremely fine quality the specimen offered at Gadoury is one of the most beautiful pieces of this type that can be bought on the market.

Among the gold coins there outstanding pieces to be found, too, such as an aureus from the family series of Septimius Severus featuring Iulia Domna on the obverse and their sons Caracalla and Geta on the reverse. The issue is very special because the provenance of this coin can be traced back to 1922, when it was auctioned off for the first time by Ars Classica in Lucerne. The fact that this coin was part of the “Collection of a Perfectionist”, which was sold in 2005 at Leu, tells everything about its quality.

By the way, of course these aren’t the only outstanding rarities of this auction. Experts will find a cistophorus of Claudius with an extraordinary portrait, a dupondius with the macellum, two medallions, a solidus of Magnentius and of Pulcheria.

The section of ancient coins is rounded off by 45 Byzantine coins as well as issues from the Migration Period.

Coins from Monaco and World Coins

The section of 1,500 lots of coins and medals from all over the world starts with coins from the auction house’s home country of Monaco.

As always, collectors of gold coins will find what they are looking for at Gadoury – especially if they pay special attention to quality. Whether it be from Prussia – cf. a rare gold medal weighing 6 ducats from 1674 commemorating the Swedish invasion – or from Spain – the Escudo from Toledo of Fernando and Isabella is an amazing rarity and it is the first coin of Rafael Tauler’s book “Oro Macuquino – Catálogo Imperio Español 1474 a 1756” – treasures can be found all over the catalogue.

If you are interested in patterns, you will also find a rich selection both from Monaco and France as well as from exotic countries like Cambodia, New Caledonia and Vietnam. The wealth of patterns shouldn’t come as a surprise. After all, Éditions Gadoury is a specialist in this field and published the standard reference for French patterns.

As always, an important emphasis of Gadoury’s auction sale is laid on France. This time, especially the Middle Ages are represented by numerous gold coins. As an example, a double royal d’or of the first King of France from the House of Valois, Philip VI is shown. It is the first issue from 6 April 1340. The coin is the numismatic testimony to a belligerent age. In spring, the Flemish cities, which depended on wool imported from England, had recognised the English king as their ruler. Philip VI had to have huge quantities of coins minted to pay the army that stopped the English attack. This piece is one of these coins and it is the most beautiful known specimen of its type.

Let’s jump from the first Valois to the last. Henry III, who had a very bad reputation among his contemporaries, died childless and left his throne to the Bourbons, namely to the very Henry IV to whom Paris was well worth a mass.

Gadoury offers an extremely rare coin of Henry III, the piéfort of an écu d’or minted in 1576 in Paris. It is the only graded specimen. PCGS describes it with SP55.

And thus we arrived in the 19th century, namely in the short era of the French Second Republic. Back then, the young democracy organised a competition to find new motifs for a new France. Those who are looking for a perfect example for the results of this contest, have now the chance to acquire a perfect piece. NGC graded the 20 francs piece from 1851 offered at Gadoury NGC PROOF 64 + CAMEO!

Let’s conclude the trip to France with a unique selection of the four prize medals awarded on the occasion of the Exposition Universelle of 1855 in Paris. This exposition was actually of historical importance: after all, the official Bordeaux Wine Classification, which is still valid today, originates in that event!

Back then, well-known medallist Jean-Auguste Barre created the four prize medals, which can be seen in an original case: the three medals in gold, silver and bronze, as well as a gold medal with a smaller diameter.

A Glance at Great Britain

After the trip to France, let’s take a look across the Channel. Around 150 lots of British coins and medals will be auctioned off, including a pretty selection of sovereigns and a specimen of the popular Gothic Crown with the spectacular grading of NGC PROOF 64 CAMEO.

The auction house presents another pattern, namely a pattern crown by William IV from 1831 with a smooth edge, which is not only extremely rare but also of exceptional quality being graded NGC PROOF 64.

560 Lots of Italian Coins and Medals

The largest part of the auction consists of coins and medals from Italy. Whether it be rarities from the Middle Ages, the Renaissance period or of the following centuries, if you’re a collector of Italian issues, you should examine the offer attentively.

Several rarities come from the Duchy of Parma such as three double ducatones of Ranuccio I Farnese featuring Mars and Minerva crowning the Farnese lilies on the reverse.

From Venice, there is a historical testimony to the fall of the Serenissima. It is an almost perfect zecchino, which does not show the name of one of the city’s 120 doges but the inscription FRANC II. The piece reminds us of the fact that Napoleon occupied the Republic in 1797 and, shortly after, he annexed the city with Terraferma to the Habsburg Empire by means of the Treaty of Campo Formio. In turn, emperor Francis ceded the Austrian Netherlands and signed a secret additional agreement allowing France to extend its borders up to the Rhine. Zecchini issued on his behalf are extremely rare, especially in this quality.

The Collection of a “Gentiluomo di Casa Reale” – Part 3

In 2020 the third part of the very extensive collection of a “Gentiluomo di Casa Reale” will be sold. Those interested in coins and medals from the Casa Savoia know that they have to mark the date of this auction on their calendar. Just like it was regarding the first two parts of the collection that were auctioned off, the material is just fantastic. The time span ranges from Umberto II (1080-1103) up to Vittorio Emanuele III. In terms of price, there is something for everyone: there are lots with estimates starting at 50 euros, but also great rarities in the five-digit range, such as the eightfold scudo d’oro minted in Turin under the guardianship of the mother of Carlo Emanuele II or the carlino da 5 doppie minted in 1757 in Turin under Carlo Emanuele III graded AU58 by NGC.

Among the further rarities are a carlino da 5 doppie, Turin 1786 graded NGC AU55, a medal minted in 1775 under Vittorio Amedeo III commemorating the wedding of Carlo Emanuele IV and Marie Clotilde, the sister of the unfortunate Louis XVI of France, a 80 lire piece from 1821 graded NGC MS61, a 100 lire piece minted in 1872 in Rome by King Vittorio Emanuele II, of which only 661 specimens were produced and a 100 lire piece minted in 1937 in Rome graded MS63 by PCGS featuring a Roman lictor on the reverse.

At this point a set is highlighted, which hasn’t been published in this form so far and was issued on the occasion of the International Exhibition for Agriculture and Industry, which took place in Rome in 1912. The original case contains four gold coins from this very year: 100, 50, 20 and 10 lire, all of them were graded MS64 by PCGS.

Lovers of Russian coins can look forward to an interesting small series, whose highlight is a piece minted in St. Petersburg in 1902, which was intended to be compatible with the gold coins of the Latin Monetary Union. The denomination of 37.5 roubles exactly corresponds to 100 francs. Only 225 specimens of this coin were struck. The tsar received 200 of them in order to distribute them as gifts. The other 25 pieces were given to Grand Duke George Mikhailovich, who is known to us as an important coin collector. Gadoury offers the best known specimen of this issue graded MS62 PROOFLIKE by PCGS.

Collectors of gold coins from the 20th century of excellent quality have no choice but to carefully study the catalogue of the 2020 Gadoury auction. Many of the pieces are the best specimens known to the grading institutes. For instance, the two extremely popular multiple ducats from Czechoslovakia minted in 1929. The 10 ducats piece, of which 1,564 specimens were struck, was graded MS66 by PCGS, just like the 5 ducats piece, of which only 1,827 pieces exist.

Thus, carefully studying the catalogue isn’t the only thing worth your time, planning your stay in Monaco is, too. Monaco is always worth a trip!

You can find the catalogue online at Gadoury’s website.

Of course, it is also possible to bid live on your computer at home via Biddr.

October, 10. 2019
On 15 and 16 November 2019, the Gadoury auction offers something for every collector – at the highest level: From the finest ancient coins to coins from all over the world and to the second part of the spectacular collection of a gentleman from the House of Savoy.
error: