January 25, 2018 – FUN stands for Florida United Numismatists; in its best times, the coin convention by the same name, the FUN Convention, attracted more than 1,500 exhibitors and more than 15,000 visitors. Today, there are not quite as many anymore, but there is still great participation: The organisation estimated 600 exhibitors and 10,000 visitors for 2018.

I was one of these 10,000 visitors; and I was very curious. For many years, American traders I talked to during the New York International Numismatic Convention had been telling me how unfortunate it was that the both of these significant coin conventions were happening at the same date. 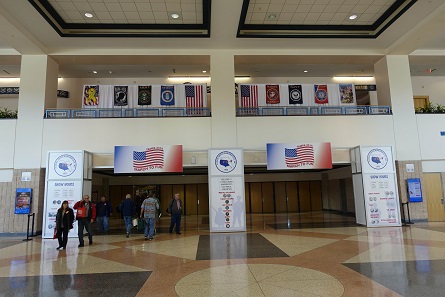 The entrance of the FUN Convention. Photo: UK.

Since last year, this is no longer the case. In 2018, one could take a plane from Europe to the US, start at the FUN and then travel to the numismatic week around the New York International. It was a worthwhile detour – the FUN Convention is really worth a visit. 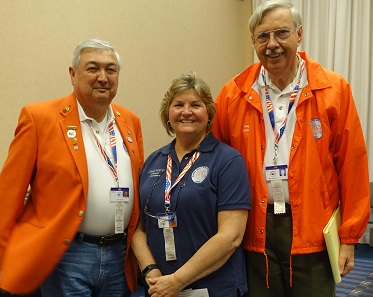 The organiser of the FUN: Cindy Wibker with her team. Photo: UK.

Actually, the experience “FUN Convention” already starts at the airport, where, once again, I find myself in the wrong immigration queue. After what feels like an eternity, I am faced with the border official, who inquires my “where” and “why”. I disclose: “I am a numismatist”. “Oh, you are here for the FUN Convention”, he answers. “Don’t forget to pick up your free Mercury Dime!” It’s the first hint that the organisation’s local PR is working. Be it taxi driver or hotel reception, everyone, truly everyone knows about the coin convention. A big compliment to the organisers! 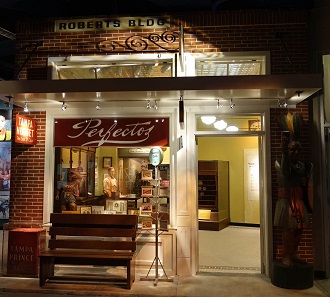 For an American metropolis, the Cigar City Tampa with its 400,000 inhabitants does not seem too overwhelming. It is called the Cigar City because, aside from Cuba, it is the most important centre of production of the giant “Havannas” that were so impressively smoked by certain politicians in the first half of the 20th century. Tampa is a beautiful city with an old and a new city centre. Both can be conquered in a decidedly un-American way, by foot or by tram. 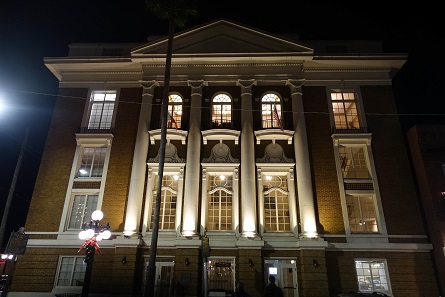 Palace of the Italian Club of Tampa / Ybor City. But beware, as Fred Pastrone pointed out, it does not constitute an association of Italian workers but it was exclusively Sicilians, who found well-paid work in the cigar factories of Tampa. Photo: UK.

The Cuban-tinted Ybor City, where cigars were produced in the old days, is now a vibrant nightlife district, which is an approximate 45 minute-walk(!) from the convention centre. 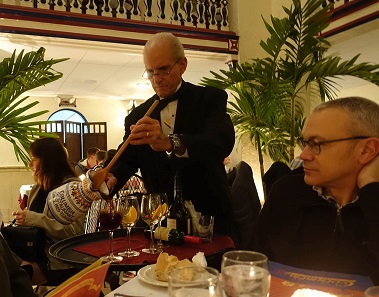 Luis Lalana of Aureo&Calicó is watching the waiter mix sangria at the traditional restaurant Columbia. And yes, the sangria tastes just as wonderful as it looks. Photo: UK.

Talking a nice walk in the mild winter evening of Florida to a restaurant with Cuban cuisine is a great addition to a convention day.

A look inside the exhibition hall. Photo: UK.

Speaking of the Tampa Convention Center. There are probably only a few convention halls that are located in such a beautiful area. If you want to grab some fresh air, you can just walk along the boardwalk, where a number of small yachts lie at anchor. The convention hall itself, well, you know what convention halls are like: Big, lit by artificial lights and somewhat empty, which is not due to a lack of exhibitors or visitors, but due to the sheer size of the room. 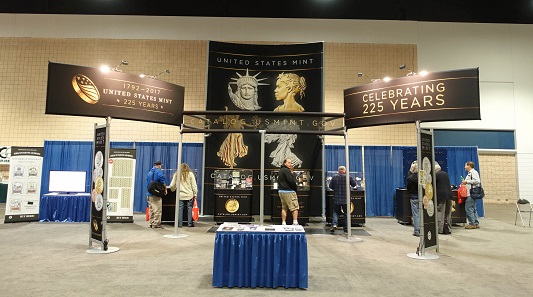 The booth of the US Mint. Photo: UK.

Many visitors arrive, although it is somewhat difficult to imagine that there are actually more than 10,000 of them walking through the hall in four days. However one certainly has to keep in mind that the FUN, just like all American coin conventions, is exceptionally long. It starts on Thursday and ends on Sunday. Every day, doors are open from 10 am to 6.30 pm! But coin dealers are not quite as persistent as the opening hours. They come when most visitors are expected to be there, and thus sometimes leave their tables unattended during off-peak hours. 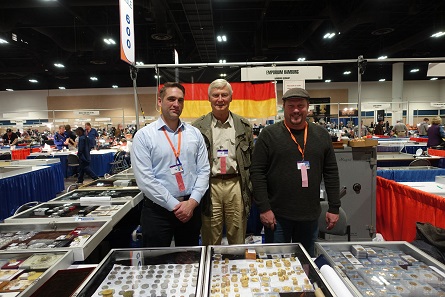 Dealers come from around the world with a special focus on the South of the United States. Next to renowned guests, who can be spotted at many coin conventions, you can also see new faces, who neither participate in the New York International nor in the ANA Summer Convention. The FUN show is predominantly a meeting place for many local coin dealers from Florida and the surrounding area, who do not often visit other coin conventions. Consequently, the few foreign visitors I saw in Tampa were joyous about their purchases. “I attend the FUN to buy things”, I heard, “And then I sell them at the New York International.” 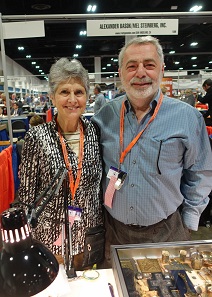 Although the purchase might be more lucrative for Europeans than the disposal, the organisers are still very eager to lure visitors into the convention hall, which is why the entrance is free. Interested parties are even rewarded with little gadgets. 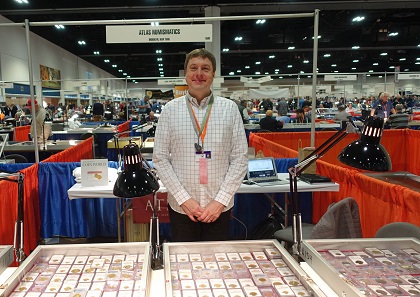 Christopher Baker at the booth of the New York company Atlas Numismatics, which has a table at the FUN despite the fact that many coin dealers are visiting their home town at the same time. Photo: UK.

It is impressive to see more than just the usual collectors. Many people, who would normally have inhibitions and not attend a coin convention, get their old treasures from their drawers in order to get them professionally checked and their value estimated. The presence of children and adolescents is particularly surprising. They are an important target group for the organisation. The advertising clip of the FUN Convention by David Lisot thus shows happy children, enjoying their coin presents.

The daughter of Joachim Schwiening (MA-Shops) making quite the holiday bonus as “Page” at the FUN. Photo: UK.

Indeed, American coin conventions are much more targeted at children than conventions in other countries. Firstly, there are gifts everywhere and secondly, children have their own set place within the organisation. Neatly dressed in blue work coats, they make quite an allowance as so-called “Pages”, doing small services like cleaning showcases or handing out leaflets. They certainly don’t get bored this way. And the coin convention thus turns into a place of fond memories, later on. 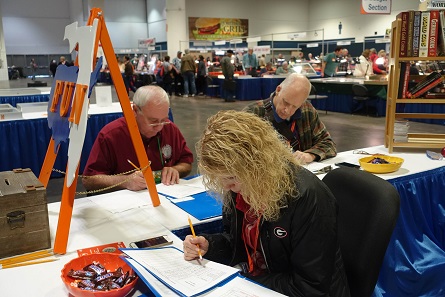 The survey about the exhibitions is dutifully assessed. Photo: UK.

There are attractions we already know from other American coin conventions: Lectures and a competition for the best display cases. This year, a presentation on the topic of strikes, called “Canadian Wrong Planchet Strikes” by Patrick Glassford won. 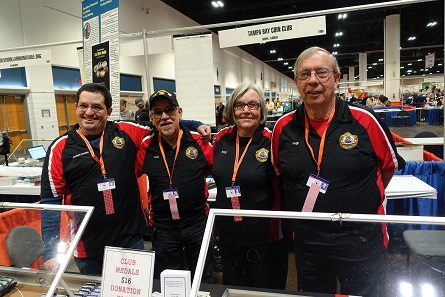 The participation of collectors’ clubs is also very impressive. They have special areas to present themselves to the public. 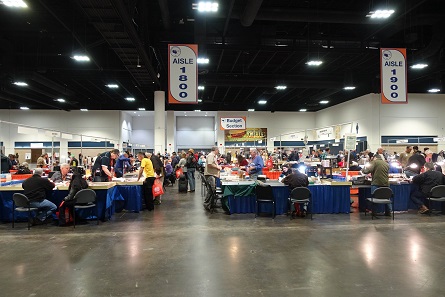 The Budget-Section. An idea for your local coin conventions? Photo: UK.

However it was neither the dealers nor the clubs that saw the most business. Instead, most business was going on under a big sign that read “Budget”. Maybe this could be an idea for other coin conventions, too. 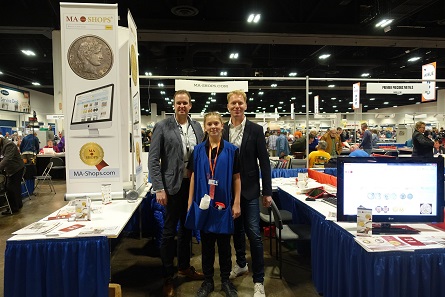 The team of MA-Shops was very content: There will probably be a lot more coin dealers for US-American coins at MA-Shops in the future. Photo: UK.

The FUN Convention has one big advantage: It takes place during a dreadful season in a spring-like climate. While countless jumbo jets at JFK Airport in New York had to go back to the airport they came from after nine hours of flight due to extreme weather conditions, the flight from Frankfurt to Tampa went perfectly. 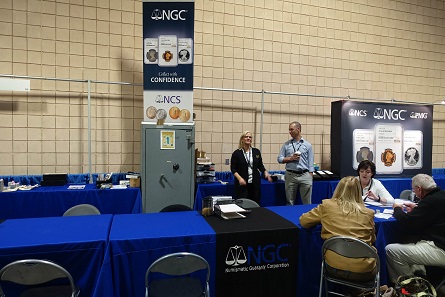 NGC had a gigantic booth, which nearly occupied an entire side of the convention hall. Photo: UK.

In addition, hotel and restaurant prices in Tampa are cheap for anyone who is used to New York prices. Instead restaurants can shine with excellent service and high quality. 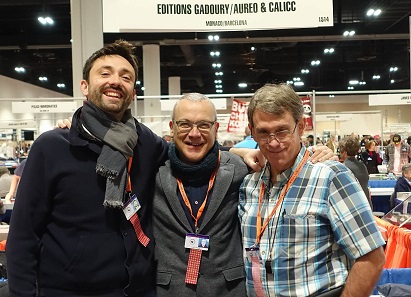 Therefore, the soft factors also suggest that you make a stopover at the FUN Convention the next time you visit the New York International or that you combine a vacation in Florida with visiting the FUN.

This coin convention is definitely worth it.

If you would like to have a table at the FUN, please contact the organising team. Cindy Wibker is your ideal contact person for all questions.

There is also a FUN show in summer. Find out more via this link.