March 24, 2011 – Launched in 2007 with the Great Wall of China, the UNESCO World Heritage Site series is an opportunity for Monnaie de Paris to travel around the world. This year, the series stops over in France to pay homage to one of the country’s most prestigious structures: the Palace of Versailles, which was the residence of Louis XIV, Louis XV and Louis XVI. A symbol of royal power and the influence of French culture in the 18th century, with 67.000 sq.m, 900 rooms, 93 hectares of gardens and 10 million visitors, this site is now the most visited in France and one of the most well known sites in the world. The site has taken a decisive step into modernity over the past few years, hosting exhibitons of works by contemporary artists Jeff Koons in 2008, Xavier Veilhans in 2009 and Takashi Murakami in 2010.
On March 23, 2011 five coins will honor this French sight.

The obverse features the palace’s main structure under a prominent sun. Beneath the palace are the French-style gardens and a profile of Neptune in which the words “Chateau de Versailles appear. 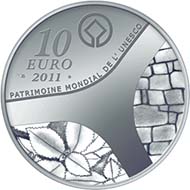