April 1, 2010 – All attendants of the sale Gorny & Mosch, Munich 185 were thrilled, when lot no. 146 was opened on March 8th, 2010. A stater of Phanes was for sale, an icon of the earliest period of coin production featuring the famous inscription “Phanos emi Seima” (I am the badge of Phanes).

So far, only four specimens of this rare issue are known. The British Museum owns one; the Deutsche Bundesbank bought the second. In February 2000, a third piece was sold to a private collector via an auction sale of Tkalec in Zurich. And now, a fourth specimen was on the market. Gorny & Mosch had estimated the piece at modest 150.000 Euro. The lot started with 120.000 Euro, an American coin dealer raised his hand and then, there was a long silence interrupted by the computer.
For the first time, Gorny and Mosch offered to their clients to participate in the sale live, by means of the Internet. 250 individuals registered for live bidding. Actually, about 10 % of the coins sold to the Internet, and even more often, the under-bidder was sitting at his own computer. Especially clients from far off and a little bit exotic countries – at least seen from a Eurocentric point of view – used the possibility to react directly. Never before, the Munich-based company had had so many participants from China and Russia. At Gorny & Mosch, the buyers’ fee of 15 % covers already bidding via the Internet, whilst other companies raise additional fees. Perhaps this was the reason for the overwhelming success.
Anyhow, it paid off for Gorny & Mosch. The American coin dealer cheered too soon for the bargain. A private bidder from China made his offer via the Internet. He also wanted to have this early testimony of Western coin history for his collection. His last bid was 290.000 Euro. The Phanes stater was knocked down at 300.000 Euro to the American coin dealer. 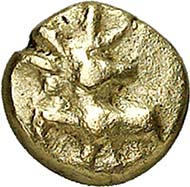 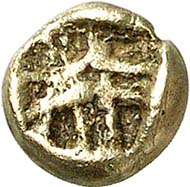 By the way, not only the high-priced coins realized such good results. Sale 186 featured ancient coins for anyone. There, a coin was for sale, which scholars have attributed many a time to Phanes. However, it was no stater, but the twelfth of a stater. The inscription lacks, too. Nevertheless, the new owner paid more than triple the estimate, 920 Euros instead of 300.