June 12, 2014 – Odyssey Marine Exploration, Inc., a pioneer in the field of deep-ocean exploration, recovered nearly 1,000 ounces of gold during the first reconnaissance dive to the SS Central America shipwreck site on April 15, 2014.

Recovered gold included five gold ingots and two $20 Double Eagle coins (one 1857 minted in San Francisco and one 1850 minted in Philadelphia). The gold ingots were stamped with assayer’s marks and weights that range from 96.5 to 313.5 troy ounces. 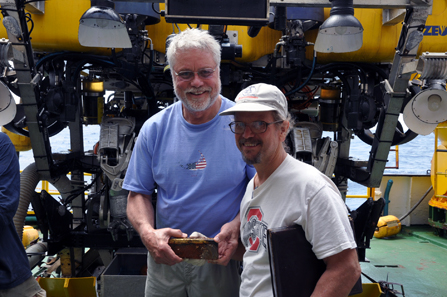 The two-hour reconnaissance dive was conducted during the transit of Odyssey’s research vessel, the Odyssey Explorer, from the United Kingdom to Charleston, South Carolina, to mobilize for the project, which is being conducted under contract with the receiver of Recovery Limited Partnership (RLP). RLP director of operations Craig Mullen and RLP chief scientist/historian Bob Evans accompanied the Odyssey team for the dive operation. Mr. Evans previously served as chief scientist, historian and later as curator for the initial Central America recovery operations conducted between 1988 and 1991. 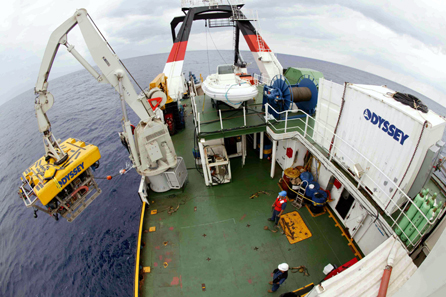 Odyssey’s eight-ton Remotely Operated Vehicle (ROV) ZEUS is launched from Odyssey’s 251′ archaeological platform the Odyssey Explorer. The ROV descends to the ocean floor to conduct work on a deep-ocean shipwreck sites while operation is directed by the archaeologist and project manager aboard the Odyssey Explorer. Copyright: Odyssey Marine Exploration, Inc., www.OdysseyMarine.com.

During the dive, Odyssey’s ROV ZEUS flew over the shipwreck to assess the current condition of the site. Gold ingots and other artifacts were clearly visible on the surface of the site during the dive and no excavation was required for their removal. Given the reconnaissance purpose of the dive, only five gold ingots, two gold coins, a bottle, a piece of pottery, a sample of the shipwreck’s wooden structure, and an element of a scientific experiment that was left at the site more than 20 years ago were recovered. The positions of the recovered artifacts were documented for archaeological purposes and will be noted in the detailed site plan that is being created. The archaeological excavation of the site will be undertaken once the pre-disturbance survey provides detailed documentation of the site. 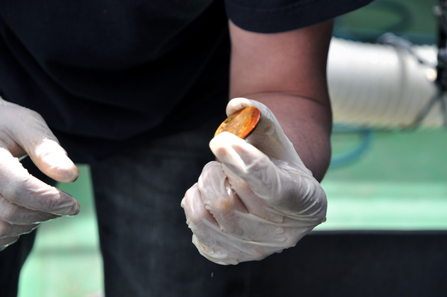 One of the two $20 Double Eagle coins recovered in April 2014 during Odyssey’s first reconnaissance dive to the SS Central America shipwreck site, which lies 2,200 meters deep and 160 miles off the coast of South Carolina. Copyright: Odyssey Marine Exploration, Inc., www.OdysseyMarine.com.

‘This dive confirms for me that the site has not been disturbed since 1991, when I was last there,’ said Bob Evans chief scientist/historian for RLP.
RLP director of operations Craig Mullen added, ‘The skill exhibited and results achieved during the initial reconnaissance dive reinforces our belief that the Odyssey team was the absolute best choice for this project. In addition to the cargo recovery operation, we plan to collect deep-ocean biological samples for Dr. Timothy Shank, a deep-ocean biologist and head of the Molecular Ecology and Evolution Laboratory at Woods Hole Oceanographic Institution. Our objective is to document and provide Dr. Shank with samples of species that have returned to the site since previous operations ended. Odyssey’s documentation capabilities will contribute significantly to scientific understanding of deep-ocean biological processes. This continues a history of supporting scientific research at the site.’

To learn more about the historical background of the SS Central America and the story of the shipwreck’s discovery read this article.

For further information on Odyssey Marine Exploration and their other projects go to the firm’s website.