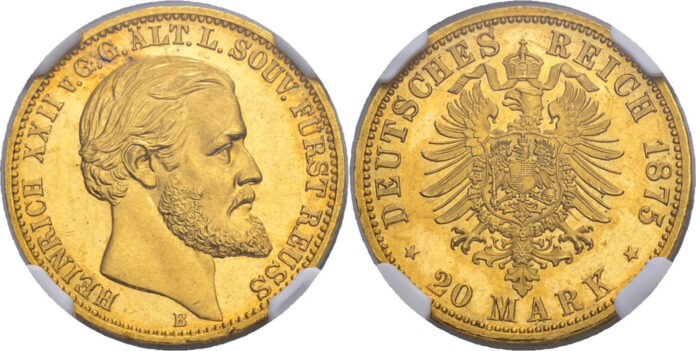 As reported in the numismatic press, since the beginning of the year there has been a new auction house in Frankfurt, which, however, sees itself in the tradition of the predecessors it is named after and which is committed to their image and expertise. Thus, Frankfurter Münzhandlung Nachf. GmbH continues the old numbering with auction No. 153. The last auction, number 152, was held in 1999 by the then owner, the Swiss bank UBS.

On 8 November 2019, a small selection of ancient coins, German coins and medals, banknotes and orders will be offered at Fleming’s Hotel in Frankfurt am Main. In this way, the Frankfurter Münzhandlung – run by the experts of the well-known Swiss auction house SINCONA in Zurich – shows the full range of numismatics and the possibilities that can be offered to customers and collectors by the company’s site in Frankfurt at the heart of the European Union.

The first section offers a variety of Ancient Coins with interesting gold and silver pieces:

In the second section, 150 German Coins and Medals are on offer including many extraordinarily preserved and/or very rare pieces:

A special numismatic chapter is dedicated to the Ghetto Coins from Litzmannstadt. After the German administration had prohibited the circulation of the reichsmark in the ghetto in July 1940, banknotes in the form of so-called mark receipts (“Markquittungen”) were introduced as the ghetto’s currency. However, these banknotes were not successful and therefore replaced by coins, which were minted by the residents themselves. Thus, ghetto money was the only other means of payment that existed on German territory at that time, and therefore it belongs to the monetary history of Germany.

There has probably never been an auction offering the few known trial pieces and strikes of this specific money with other than magnesium or aluminium alloy. It is well known that these strikes had to be presented to the German control authorities – for example in the form of lead klippe coins – before the proper minting could begin. In addition to these trial pieces, off-metal strikes in silver, German silver and copper as well as coins with mint errors and multiple lots of 5 mark pieces, some of which containing more than 100 pieces, are on offer. All lots that contain ghetto coins are accompanied by an expert opinion confirming the coin’s authenticity.

Another part of this auction of the Frankfurter Münzhandlung is dedicated to the History of Banknotes. The O. Seiffert collection of specimens has a very particular story: Seiffert, a privy councillor for financial affairs, was a member of the Reichsbank’s board of directors in Berlin and – among others – responsible for various issues during the hyperinflation of the Weimar Republic. His signature can be found on several specimens. At the end of 1924, Seiffert had the Reichsbank’s chief cashier’s office put together a collection for him, and – almost 100 years later – these banknotes, bearing the overprint MUSTER (“Specimen”), are still in the original envelopes of those days.

In the auction’s last chapter, the company’s tradition in the field of phaleristics is also being continued. After the successful special auction with Orders and Decorations in the 1990s, we are pleased to be able to offer you 26 lots with exceptional provenances – described by the expert Michael Autengruber, Konstanz.

You can find the online auction catalogue on the website of the Frankfurter Münzhandlung, and additionally a PDF version.

In spring 2019, we reported on the re-opening of the Frankfurter Münzhandlung.

For further information on the auction house go directly to the website of the Frankfurter Münzhandlung.

The Giesen Collection: The Coinage Imagery of the Ottonian and Salian...

October, 1. 2020
If you want to understand the world of the Ottonian and Salian dynasties, you have to study their coins. The Giesen Collection, one of the most important collections on this subject in recent decades, is perfectly suited for this purpose. Frankfurter Münzhandlung offers this collection in its upcoming auction.
error: