September 29, 2016 – The numismatists in Estonia had actually been interconnected very well, but it was difficult to form connections with colleagues abroad, who were doing similar research. Thus ten Estonian numismatists founded the Association of Baltic Numismatists on 28 August 2005. Their goals are funding research on Baltic numismatics, improving contact among Baltic numismatists and developing an academic discussion, promoting international collaboration and making numismatics more popular both for academics and laypeople. 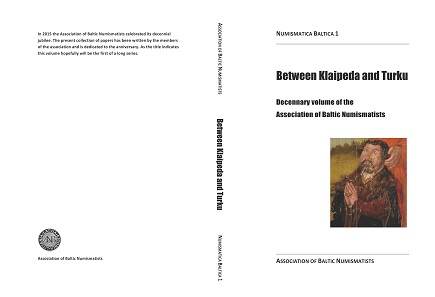 To what extent the ABN has achieved its goal, is demonstrated by their festschrift, celebrating their 10-year anniversary. It gathers 16 authors from five countries, writing about subjects from the Baltic region both in English and Russian language. The Baltic States, just to add this for our more southern-orientated readers, comprise a region in Northern Europe that ranges along the East coast of the Baltic Sea, South of the Gulf of Finland and consists of the Baltic countries Estonia, Latvia and Lithuania. During the Middle Ages, rich merchant cities like Riga, Tallinn or Tartu were located here. No wonder, Prussia, Russia, Denmark and Sweden tried to make the Baltics their own.

Therefore the Baltic States are interesting to many scholars, who are researching how widely spread their own money was used in Europe. And the majority of the articles of the festschrift in fact revolve around coin finds from Byzantium, the German Empire, the Netherlands, Sweden, Gotland and Russia, to name the most important examples.
On the other hand, there were also Livonian coins circulating in Finland. This topic is covered by Frida Ehrnsten. Gunnar Haljak writes about the first Örtugs of Gotland and provides a die corpus.
Naturally the Baltic mints are included as well. Tatjana Berga writes about the first mint of Riga, Ivar Leimus approaches the moneyer of Tallinn, Urban Dene and his network, and Victor Dabolins concerns himself with Georg Albrecht and Johann Christian Hille, moneyers of Riga between 1700 and 1701.

Two articles are dedicated to the “dark“ side of numismatics, the counterfeiting of coins. Hannu Sarkkinen takes a closer look at Meinhard der Lar. Another article revisits counterfeits from the Republic of Lithuania with the year marked 1925. And last but not least, Dalia Grimalauskaite reports on a theft from the Museum of Vilnius in 1902. She adds a list of all items stolen at the time.

With the exception of two texts, all contributions are published in English, a clear sign that the ABN aims at an international audience and thus claims its place in the international research community.

Oh, right, the festschrift will be published as Numismatica Baltica Volume 1 – which allows us to hope that we will be hearing more of the ABN in the future!

The festschrift can be ordered for 10 Euro + shipping (Careful, shipping might be more expensive than the book!) against advance payment at Ivar Leimus.

You can also let him know, if you would like to join the ABN and support them that way.

You can also just follow the ABN on academia.edu.

We have introduced Ivar Leimus in our Who’s who.