April 3, 2014 – The Numismatic Guaranty Corporation (NGC) has graded more than 200 Roman gold coins from the superb collection of the late Andre Constantine Dimitriadis, a California collector and founder of LTC Properties, a Westlake Village, California-based real estate investment trust. Assembled over a period of more than 20 years, the Dimitriadis Collection includes a number of extremely rare and pristine-quality Roman gold coins struck circa 50 BC to AD 500. 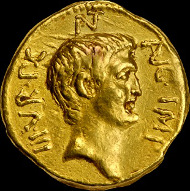 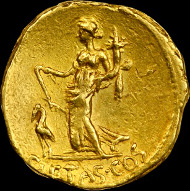 To be sold in April by Heritage Auctions, the Dimitriadis Collection is considered to be among the most impressive groups of Roman gold coins to be sold in the United States in recent memory. Many of the coins were purchased from the most important sales of the last two decades, including the collections of Nelson Bunker Hunt and William Herbert Hunt, Neil Philips, Gordon McLendon, and Anton Dreesmann. In his standard reference book “The Roman Aurei”, Xavier Calico used many of the Dimitriadis coins to illustrate their type.

According to David Vagi, Director of NGC Ancients, “The Dimitriadis Collection is a truly impressive group of coins that will attract the interest of many collectors, both veterans and those new to the market. It includes some museum-quality specimens and some true rarities that are seldom available in the marketplace. NGC is honored to have been chosen to grade these coins.”

Growing demand for NGC-graded ancient coins
The selection of NGC to grade the Dimitriadis Collection is a reflection of the growing demand from collectors and dealers for NGC-graded ancient coins.
“Because of the quality of the coins in the Dimitriadis Collection, we wanted to use NGC to grade them,” says David Michaels, Heritage Auctions Director of Ancient Coins. “Having a third-party opinion on the coins will broaden their appeal…we are certain that impartial third-party grading for ancients is paramount to the continued growth of the ancient coins market.”

“NGC grading of ancients opens the market to new buyers, especially those looking for quality,” says Cristiano Bierrenbach, Executive Vice President for International Numismatics at Heritage Auctions. “It also adds tremendous value to the coins by having a third-party opinion on the grade and additional expertise.” 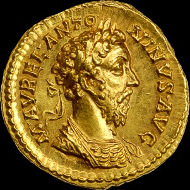 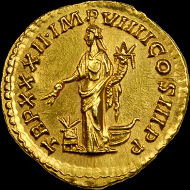 About the collection
The collection includes dozens of rarities graded AU and Choice AU as well as a number of extraordinary pieces in Mint State. It starts with aurei of the early Roman luminaries Julius Caesar, Marc Antony and Augustus. Highlighting these earliest pieces is an aureus of Marc Antony struck soon after the murder of Julius Caesar. It is graded NGC XF strike 5/5, surface 3/5 and is one of the finest examples of a very rare type.

Ten of the famous “Twelve Caesars” are represented in the Dimitriadis Collection, including participants in the destructive Civil War of AD 68-69. The collection continues with a broad selection of fine-style aurei of the Adoptive and Antonine Emperors who ruled during the 2nd Century AD. Among these are Mint State aurei of Antoninus Pius and his wife Faustina Senior, and Choice Mint State aurei of Marcus Aurelius and his colleague Lucius Verus.

Gold coins of the tumultuous 3rd Century AD are also well represented, including a nice selection of gold of the Severan Dynasty, underscored by two particularly nice aurei of Caracalla. One example from a Syrian branch mint is graded NGC Choice MS 5/5 – 5/5, Fine Style and is illustrated in the standard reference by Calico. 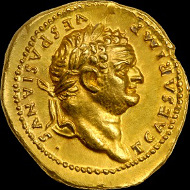 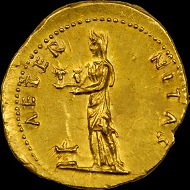 The Tetrarchs are also well represented, including an especially fresh example of the Emperor Maximian graded NGC MS 5/5 – 4/5. These are followed by many excellent aurei and solidi from the Constantinian Era. Among these are two solidi of the usurper Magnentius and several solidi of the Emperor Julian II which, except in advanced collections such as this, are seldom encountered.

The Dimitriadis Collection also contains exciting rarities from the Late Roman Empire, when the administration was divided between Roman territories in Europe and Asia. Some highlights include solidi of Constantine III, Majorian (perhaps issued by the Visigoths) and Anthemius, as well as rare joint issues of Leo II and Zeno and of Basiliscus and Marcus. Also included are several rare solidi of Late Roman empresses, including Galla Placidia, Honoria, Aelia Eudoxia, and Aelia Pulcheria.

For more information and to bid, visit the Heritage Auctions website.