The first part of this article has provided us with an introduction to collecting Seleukid Coinage, an overview of the history of research and a biography of Seleukos I.

The eldest son of Seleukos I, Antiochos learned battlefield command at the feet of his father and led a decisive cavalry action at the Battle of Ipsos in 301 BC. When Seleukos took the beautiful Stratonike as a bride in 299 BC, Antiochos fell so deeply in love with her that he seemed likely to die. In 294, Seleukos gave Stratonike as wife to his son; at the same time he elevated Antiochos to co-regent and moved the newlyweds off to a new command of the East, solving what must have been an awkward situation in the palace. Antiochos smoothly assumed power after his father’s death in 280 BC, but had his hands full trying to maintain the integrity of the immense polyglot kingdom he had inherited. Two major wars against the Ptolemaic Kingdom resulted in stalemate, but his greatest challenge came when a mass-migration of warlike Celtic tribes swept into Asia Minor in the 270s BC, threatening to wipe out Greek civilization. Antiochos marched to confront them and won an overwhelming victory at the Battle of the Elephants (so-called due to the crucial role of the elephant corps) in circa 269-268 BC. Greeks gave him the title Soter (“savior”) in thanks for saving the day. 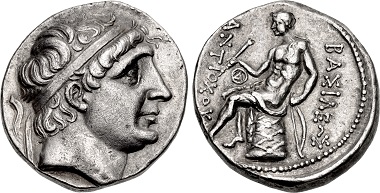 The coinage of Antiochos I was even larger than his father’s, and his heavy-browed, rather mournful portrait (one can easily imagine his lovesick moping over Stratonike) is a common sight on silver tetradrachms in auction catalogs and dealers’ stocks worldwide. A reverse type he innovated became the standard Seleukid reverse for more than a century: It depicts Apollo seated to left atop the Omphalos of Delphi, a sacred stone covered with woven netting that was said to be the “navel of the earth.” Apollo rests his left hand on a grounded bow and looks down the shaft of an arrow held in his right hand, testing its trueness.

A rare and artistic variant on this type, struck at the mint of Magnesia on Mt. Sipylus, depicts Herakles resting after his labors. The style of portraiture and the elegance of the reverse vary greatly depending on mint; on some coins Antiochos appears a man of vigorous middle age, while on others he looks wizened and overburdened by the weight of rule.

Seleukid fortunes had reached a low ebb when Antiochos III, great-great grandson of Nicator, arose to the throne after the assassination of his elder brother. The once-mighty kingdom had been riven by dynastic disputes, foreign invasions, and native uprisings, and looked to be on the cusp of dissolution. The young Antiochos announced his intention to reconstitute the empire of his ancestors, and, after an incredibly vigorous three decades of rule, by 192 BC seemed to have accomplished just that. Not particularly modest, he assumed the title Megas Basileos (“Great King”), claiming parity not just with Alexander, but with the Achaemenid Kings of Persia.

Alas, at the summit of success he chose to press his luck and launch an invasion of mainland Greece, bringing him squarely against the upstart Roman Republic, the declared guarantor of Greek freedom. To the shock of everyone, Antiochos proved not-so-great and he suffered a crushing defeat at the Battle of Magnesia in 190 BC, barely escaping with his life. The humiliating treaty imposed by Rome, and massive annual indemnity of 15,000 talents (about 22.5 million tetradrachms), largely undid all the successes of his early career and again set the kingdom’s fortunes into a downward spiral.

Antiochos III’s coins are of mostly of the typical royal portrait / Apollo-on-Omphalos type, and his image changes from that of a callow youth to a craggy campaigner over the course of his reign. One of the most interesting types depicts an Indian war elephant on the reverse in place of Apollo, pointing (again) to the importance of elephants in Hellenistic warfare. Elephant tetradrachms are among the most prized Seleukid rarities and usually sell for many thousands of dollars; the silver drachm, in contrast, is more widely available and can be obtained in the mid hundreds to low thousands. 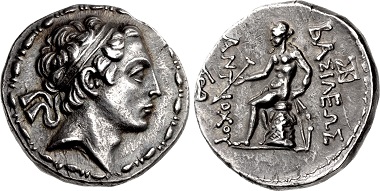 As the one Seleukid ruler to enter popular consciousness, “Bad King Antiochos” has gone down in history as a tyrant, a megalomaniac, and the unintentional father of Hanukkah, the Jewish Festival of Lights. The younger son of Antiochos III Megas, Antiochos spent his youth as a hostage in Rome until the murder of his brother brought him to the Seleukid throne. From the outset, he energetically tried to strengthen his kingdom through a policy of Hellenization and urbanization. This found favor with his Greek subjects, but the Semetic peoples were less impressed. His assumption of the title Epiphanes (“God manifest”) provoked resentment; in a play on words, the Jews nicknamed him Epimanes or “madman.” His pillaging of the great Temple in Jerusalem turned resistance into outright revolt. Years of bitter warfare followed, leading ultimately to a Jewish breakaway state under the Maccabees, the Jewish recapture of Jerusalem, the re-consecration of the Temple, and the first Hanukkah.

Yet Antiochos regarded the Jewish revolt as a minor annoyance, for he had his eyes on a bigger prize. In 168 BC, he invaded Egypt with his well-trained army and easily swept aside all resistance. But at Eleusis he was met by a single Roman magistrate, the aged Popillius Laenus, who handed him a decree by the Roman Senate demanding his immediate withdrawal. Laenus then dramatically drew a circle in the sand around the king and demanded an answer before he stepped out of it. Antiochos had no choice but to submit, or suffer the fate of his father at Magnesia. Antiochos returned to Syria with his army, sacking Jerusalem along the way, and spent his remaining years in royal self-indulgence. 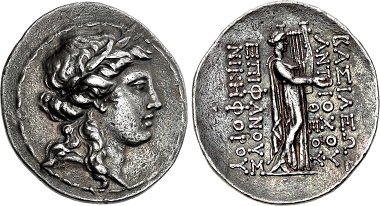 Like the man himself, the coinage of Antiochos IV is flamboyant, diverse, and complex. His portrait issues replace Apollo on the reverse with an enthroned figure of Zeus. He also struck a beautiful run of “Festival” issues honoring Zeus and Apollo, in the highest artistry of the age. These last types are rare and consequently pricey when they show up at auction; in general, his coins are fairly easy to obtain in the middle price range of $500-1,500, while smaller silver denominations and bronzes can be had quite inexpensively.

Daughter of the Egyptian king Ptolemy VI, Cleopatra Thea married the Seleukid usurper Alexander I Balas in 150 BC to cement ties between the two realms. Within five years, Balas had been deposed and killed; his consort, however, had remarkable staying power and proved herself an adept player of the Hellenistic game of thrones. Over a 30-year career, Cleopatra Thea was a Ptolemaic princess, queen-consort to three kings (Balas, his replacement Demetrios II, and Antiochos VII), queen in her own right, and queen-mother of two kings. As ruthless as she was ambitious, she did much to define politics in her age. In 125 BC, Cleopatra assumed supreme power for herself, which required the murder of her eldest son, Seleukos V – reportedly she used him for archery practice! After a brief period as sole monarch, she was persuaded to share power with her youngest son, Antiochos VIII Grypos. This last son finally escaped her domineering shadow in 120 BC by forcing her to drink a poisoned cup she had intended for him.

Uniquely in the Seleukid series, Cleopatra appears by herself on the coinage as well as in combination with her various husbands and sons. A rare gold issue modeled on the famous issues of Ptolemaic queens depicts her veiled portrait, along with a cornucopia on the reverse. When she appears on silver tetradrachms conjoined with a Seleukid king (initially her husband, Balas, and later her son, Antiochos VIII), her portrait is topmost, in the position of honor. One could hardly ask for more explicit evidence of her forceful personality.

More information and past and future CNG sales is available online.