In AD 1206, Temujin was proclaimed ruler of all the tribes living in what is now Mongolia. He took the name of Genghis Khan and started an aggressive policy of expansion.
At its height in 1279 the Mongol Empire stretched from Hungary in the west to Korea in the east, and from Siberia in the north to Tibet and the Iranian plateau in the south. It covered up to 33 million km2 (66 times the size of the UK and 23% of the world) and had a population of 111 million who spoke a bewildering range of different languages.

Copper coin of Hülagü (AD 1256-1265) struck in the mint of al-Jazira. Hülagü led the siege of Baghdad in 1258 and was the founder of the Ilkhanate. This coin mentions Kubilai Khan as overlord to show that the Ilkhanate is a subordinate to the Great Khans.

From 1260 onwards the Empire of the Great Khans was composed of four independent states (ulus) ruled by Genghis Khan’s descendants:

The Empire then experienced a period of peace, known as the Pax Mongolica and attested by Marco Polo in his travel account, Il Milione. It was commonly said that ‘a maiden bearing a nugget of gold on her head could wander safely throughout the realm’. The Pax Mongolica encouraged trade and facilitated the exchange of technologies and ideologies across Eurasia.
The end of the Pax Mongolica was marked by the disintegration of the khanates and the outbreak in Asia of the black plague, commonly called the Black Death.

Having no monetary tradition of their own, the Mongol khans adapted to local customs. Silver dirhams were struck in the western part of the empire, whereas Chinese-style bronze coins with central holes were cast in the East.
Printed paper banknotes copied those of the Chinese song and Jin dynasties. Mongolian coins bear a variety of scripts, which reflect the great diversity of peoples and languages under their rule. The Mongols did not originally have their own writing. First, in 1209, they adopted the Uyghur script. Then, in 1260, Kubilai Khan commissioned a Tibetan monk to create a new script, called Phags-pa. This was destined to be the official writing system of the empire and was used to transcribe all languages across the empire. 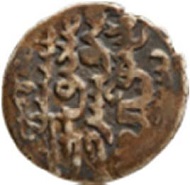 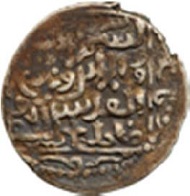 Silver dirham of Abaqa (AD 1265-1282) from the mint of Tbilisi, Georgia. The inscription ‘In the name of the Father, the Son and the Holy Spirit, one God’ (in Arabic above a Christian cross) is quoted from the Gospel of Matthew. Although this part of the Empire was mostly Muslim, Abaqa Khan was a Buddhist and his mother, Doquz-khatun, was known to have been a devout and influential Nestorian Christian.

Mongol khans tolerated different religions within their empire. They themselves followed various faiths. Genghis Khan was the embodiment of Heaven according to Mongolian shamanism, but he himself expressed an interest in Taoism. His son Tolui married a nestorian Christian. His grandson Hulagu became a Buddhist and his great grandson Tekuder converted to Islam. The religious pluralism of the period is obvious on coins. The shahada, the Islamic creed, appears on the coins of Abaqa Khan, who was Buddhist, mixed with the Christian trinitarian formula.
The Mongols, although nomadic, successfully built an empire, issued coins, and created a script to write their language.

For information on the current exhibition please go to the Ashmolean website.