April 26, 2012 – Masat-1 (the name derives from MAgyar and SATellite) was the first satellite built completely by Hungarians. This so-called “cube satellite” with a mass of roughly 1 kg and a length of 10 cm long was developed by the students of the Budapest Technical and Economics University, with the assistance of instructors and researchers. Some of the parts were manufactured by Hungarian companies.

The first Hungarian satellite was launched on 13 February 2012, at 11.00 Hungarian time. It was carried into space on a Vega rocket of the European Space Agency from the Kourou space centre in French Guyana.

Masat-1 serves educational purposes and following its entry into orbit it collects data on its status and its environment and sends them to ground station designed by the BME team and housed at the Engineer Training Institute.

The satellite follows an elliptical orbit at altitudes of 350-1,450 km. It overflies Hungary 8 times daily, and on average the data it transmits can be received for 5 to 20 minutes. It is expected that the satellite will be operational for a few months. In 3-4 years the satellite will slow and burn up upon re-entering the Earth’s atmosphere. 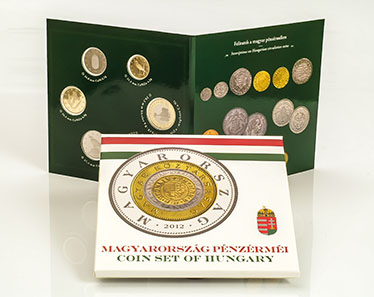 The Hungarian Mint also informed that the first coin set of Hungary containing circulation coins with the new legend MAGYARORSZÁG meaning Hungary instead of the former inscription Magyar Köztársaság (= Hungarian Republic) was issued in brilliant uncirculated and proof. The sets are illustrated with pictures of historical Hungarian coins featuring the different legends used in the history of Hungarian coinage.

This is footage of the Masat-1 launch.

And you can see how the satellite will orbit around the Earth in this Youtube clip.