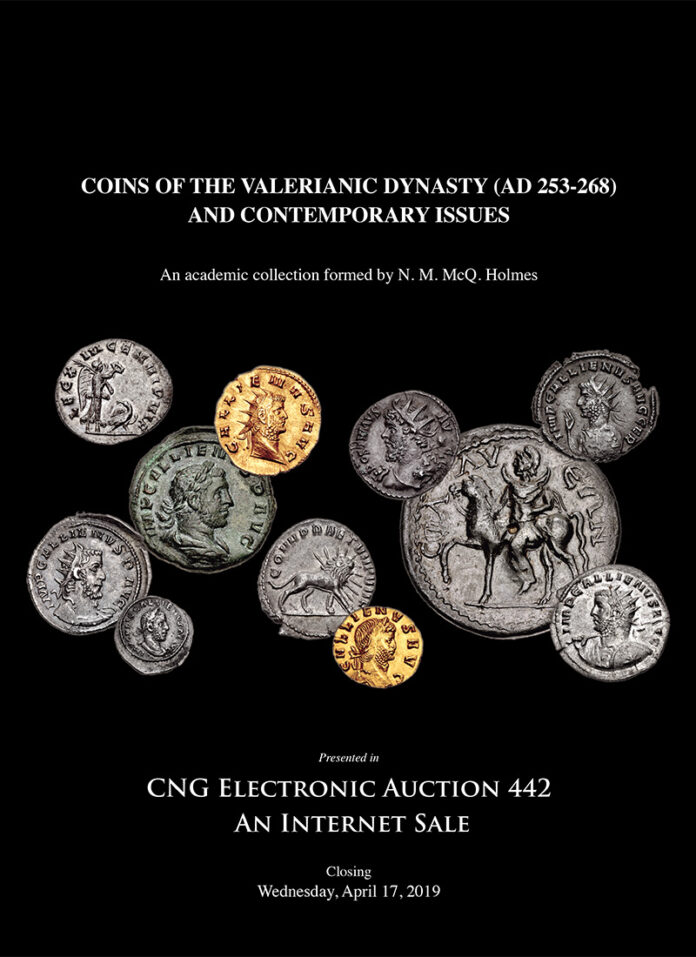 Classical Numismatic Group, LLC, of Lancaster, Pennsylvania and London, England, is pleased to announce the sale of the N. M. McQ. Holmes Collection of Coins of the Valerianic Dynasty (AD 253-268) and Contemporary Issues. The Holmes collection will be offered in its entirety as CNG Electronic Auction 442. Consisting of 874 lots, CNG E-Auction 442 will open on Wednesday, 3 April 2019, and close on Wednesday, 17 April 2019, beginning at 10AM. A limited edition, printed catalog of the collection will also be available.

A life-long academic numismatist, Holmes was originally attracted to the coinage of emperors such as Gallienus and Claudius II since the coins “could be obtained without large financial outlay.” As he explains in the introduction to the collection: “Common types could be purchased for just a pound or two each. Once in paid employment I was able to expand the range of my collecting to some extent, but I very soon discovered that many of my colleagues in the archaeology and museum professions were deeply opposed to the idea of those employed in this type of work forming private collections at all – an attitude which unfortunately still persists in some quarters today. I disagree with this fundamentally, as I believe that those who are fortunate enough to be able to accumulate numismatic knowledge in the course of their employment are best placed to carry out research on, and publish discussion of, interesting items that appear on the open market. I do, however, accept that it is at the very least unwise to collect in the same field as an institution where one is employed, as aspersions can be cast, however unjustly, and these may harm one’s reputation. It was fortunate for me, therefore, that neither of the institutions which employed me throughout my career had any interest in acquiring mid third-century Roman coins.”

“Consequently, I felt able, with a clear conscience, to enlarge my collection relating to this period of history, and for a time my aim, like that of many other collectors, was simply to acquire as many different types from within my chosen date range as possible, which I narrowed down to AD 253-268. It rapidly became clear that the coinage of Gallienus, in particular, was amongst the most innovative of all Roman imperial issues. As time passed, and particularly when I obtained employment as an academic numismatist, I decided that my acquisition policy should be geared to more than just accumulation, but should be formulated in order to provide some sort of service to numismatists, both professional and amateur. The result is this collection now being published and offered for sale,” Holmes continued.

The Holmes collection consists of coins that “range from the unique to the very common,” with such highlights as the largest offering ever of the legionary antoniniani of Gallienus, with over 90 different varieties. For both the online and printed catalog, Holmes prepared an introductory paper on the iconography of the coinage of the Valerianic dynasty, which includes appending notes to many of the catalogue entries for individual items. Holmes stated, “I hope that others may find these of interest and of benefit. Coins in this collection range from the unique to the very common, but those in the latter category, which I have retained to the end, are there because they serve to illustrate aspects of the iconography study.”

The limited edition printed catalog, with only 150 copies available, will be available after April 3rd. To order a catalog, please visit the CNG website. The catalog is $35 to North American addresses, and $65 to the rest of the world. Payment may be made by U.S. $ check or Visa/MasterCard.

The online catalogue is not yet available online. But check out on the CNG website.