May 17, 2018 – CIT Coin Invest starts a new series on behalf of Monolia featuring “Prehistoric Beasts”. The first coin is dedicated to the Velociraptor mongoliensis, a fearsome dinosaur from the Late Cretaceous era. It is best known for its depiction in the cinema classic Jurassic Park.

Pretty much everybody who loves dinosaurs will remember the role that the Velociraptor mongoliensis played in Jurassic Park. Though, technically speaking, it was the bigger relatives of the Velociraptor, members of the species “Deinonychus”, who were hunting humans in the film. Michael Crichton, the author of the book on which the film was based, decided to name his prehistoric heroes, modelled on the considerably larger Deinonychus, Velociraptors because it sounded more exciting.

That was a memorable name choice, since the name is composed of the word “velox” (= Lat. fast) and “raptor” (= Lat. predator). And Velociraptors were dangerous enemies indeed. Even though, with a length of about 2m (including the tail), a weight of probably 15kg, and a shoulder height of 0.5m, they would only have reached up to a modern human’s thigh. Recently discovered evidence proves that they were feathered. Researchers today believe that the Velociraptor killed its prey by jumping on its back and ripping out large chunks of meat from the still living animal until it died of shock or blood loss. 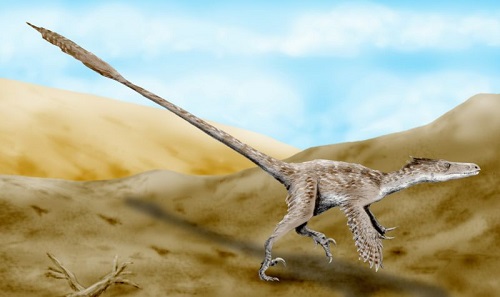 Pencil drawing of what the raptor was supposed to look like. Source: ArthurWeasley / CC-BY 2.5.

Velociraptors lived during the Late Cretaceous, some 75 to 71 million years ago. As, to date, fossils of the species were found in Mongolia and Inner Mongolia only, it is rightly called mongoliensis. The fossil which has preserved an entire Velociraptor in a deadly fight with a Protoceratops is a national treasure that was only once permitted to leave the country.

For this very special dinosaur CIT Coin Invest AG has come up with a whole new processing technique and named it “Red Rock Finish”. This processing technique gives the proof-quality coin the rough look of a sandy rock, from which the skeleton rises in an especially high relief thanks to smartminting technology. Due to this additional treatment which takes place after the coin is struck, it receives the quality mark prooflike.

You can watch the legendary kitchen scene from Jurassic Park again here.

As this article shows, CIT has recently also featured Ichthyosauria on their coins.