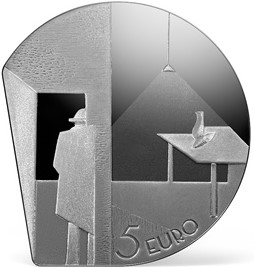 Obverse: A representation of a fragment of the painting “Self-Portrait with a Doll” (1921) by Niklāvs Strunke is featured in the centre with two frostings of different intensity. The inscription NIKLĀVS STRUNKE is placed in the lower left part of the coin, with the year 2019 and the inscription LATVIJA placed to the right.

Reverse: The painting “Man Entering a Room” (1927) is depicted with three frostings of different intensity, with the inscription “5 EURO” at the bottom right.

Niklāvs Strunke, one of the most original Latvian modernists, strongly proved his worth as an artist at the time coinciding with the declaration of Latvia’s independence. One of his most distinguished works, the painting “Man Entering a Room” (1927), has been included in the Latvian Cultural Canon. It is this painting that has been depicted on the reverse of the collector coin “Niklāvs Strunke”. Meanwhile, the coin’s obverse features a fragment of his painting “Self-Portrait with a Doll” (1921).

The graphic design of the collector coin “Niklāvs Strunke” has been created by artist Paulis Liepa, whereas the author of the plaster model is Ivars Drulle. Paulis Liepa has authored two collector coins, i.e. the innovative silver collector coin “365” as well as the collector coin “National Entrepreneur” featuring 25 raised facets on the reverse. The latter was announced the winner in the category “Most Artistic Coin” at the prestigious international competition “Coin of the Year” in 2018.

Paulis Liepa continues to experiment with the coin shape also in the work dedicated to creative legacy of Niklāvs Strunke. The shape of the coin is a circle where the edge cut by a secant forms a 99 degree angle with the circle’s tangent.

You can find more information about the coin on Latvijas Banka’s website.

Latvian coins have earned high international respect and a number of prestigious awards: In 2018, the collector coin “National Entrepreneur” was announced the Most Artistic Coin of the Year at the Coin of the Year Award contest.

You can learn more about Niklāvs Strunke and his work here.

Public Vote on Latvia’s Coin of the Year 2019

April, 2. 2020
As every year, Latvijas Banka organizes a public vote for Latvia’s Coin of the Year 2019. Nominated are four collector coins: “Cat’s Mill”, “Niklāvs Strunke”, “Gifts of the Forest”, and “Freedom Fights”.
error: