April 14, 2016 – In 2012, the Austrian Mint started the series “Klimt and His Women”, celebrating the 150th anniversary of the Viennese master’s birth. Constituting the climax of this series, the fifth and final gold coin now features Klimt’s most famous work, “The Kiss”.

The obverse of the coin depicts Gustav Klimt in one of his many favorite painting smocks on the right side, accented by some intricate scroll and patterning which is a key part of the Jugendstil world. The head and shoulder portrait featured in the square frame is of Emilie Floge, with the masses of hair that she was so well known for. Also on the obverse appear the country of issue, “Republik Oesterreich” or Republic of Austria, the face value of 50 euros and the year of issue, 2016. The Mint’s chief engraver, Thomas Pesendorfer, engraved the obverse.

The reverse of the coin was engraved by mint engraver Helmut Andexlinger and features a close up of “The Kiss” along with many of the intricate geometric patterns as per the original masterpiece by Gustav Klimt. In the lower right area of the coin design is the letter “T” completing the set of five coins, which spell out his name.

Emilie Floge, as painted by Gustav Klimt in 1902. Vienna Museum.

Emilie Floge was the lifetime partner of Gustav Klimt. She was one of four children whose father was a master craftsman of Meerschaum pipes. Emilie learned to be a seamstress and became a successful businesswoman, establishing and running her own boutique couture house. One of her sisters married Gustav Klimt’s brother and so Emilie was introduced to Gustav. She soon became the favorite muse of his, appearing in many paintings. The most famous of these is “The Kiss” which hangs in the Belvedere Palace Museum in Vienna. 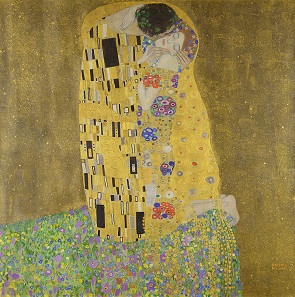 Many experts believe that the painting is of himself kissing Emilie. The depiction is open to a lot of interpretation. It does not appear to be a gentle embrace but rather a more aggressive assertion of male power over the woman. He is holding her head at a very precarious neck-breaking angle.

The very intimate and evocative portrayal was typical of Klimt, including the complex and intricate geometric patterns. Many of Klimt’s paintings were seen as scandalous and a bit of an affront to society. However, “The Kiss” was well received and bought very soon after its introduction to the art world.

Each of the coins in this gold collection includes a different painting of a woman representing the five major phases of Klimt’s artistic career. Each coin also depicts a letter in his last name: K, L, I, M, and T. Now complete, the coins of the series spell the word ‘KLIMT’.

The new coin is struck in 986 fine gold to a maximum mintage of 30,000 pieces in proof quality only. The diameter of the coin is 22mm and it contains 10 grams of fine gold. Each coin is packed in an attractive box with a numbered certificate of authenticity, which is six pages in length and provides detailed background and technical information about the coin.

A beautiful wooden collection case for the whole series, “Klimt and His Women”, may be purchased separately and is accompanied by a detailed information booklet.

More information on the series “Klimt and His Women” is available here.

And a wealth of information on Gustav Klimt is gathered here.