November 5, 2015 – The Austrian Mint issues the third gold coin in the “Wildlife in Our Sights” program. The six coin series celebrates the diversity of Europe’s native wildlife as well as the sustainable management of their habitats.

The obverse was designed and engraved by the mint’s master engraver, Thomas Pesendorfer, and depicts the male capercaillie, a wild European woodland grouse, in full courting pose; tail feathers fanned out, wings somewhat drooped to the ground and head and beak pointed skywards singing out its distinctive and long mating call. Around the bird are pine boughs, pinecones and a tree stump, representative of the natural habitat where it lives. Distinctive decorative ornamental scrolls complete the design and give this series its distinctive character.

The obverse also bears the country of issue, “Republik Oesterreich”, the 2015 year of issue and the face value 100 euros.

The reverse of the coin was designed and engraved by mint engraver Helmut Andexlinger. It depicts both male and female capercaillie sitting on the branch of a pine tree. The male bird is usually double the size of the delicate female as can be seen in this depiction. The design is completed with a depiction of a pinecone, the detailed bark of a coniferous tree along the right side of the coin, as well as a few more pine tree trunks in the background. The rocky crag in the left background completes the design. 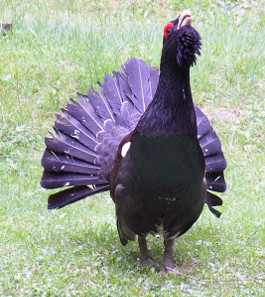 The capercaillie lives in coniferous, mixed and deciduous woodland, where it spends the night roosting in trees. The habitat of the capercaillie is disappearing and this most striking of birds is now extinct in a number of European countries. Their typical habitat is a mature mixed forest with lots of sun. The mature forest is important as they are active during daylight hours and sleep on horizontal branches during the night. Austria is one of the last countries where the Capercaillie, though rare, still exists in relatively large numbers. 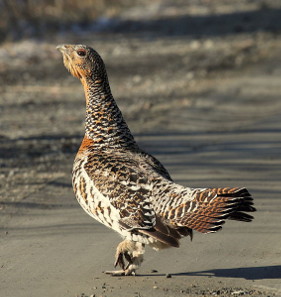 The Capercaillie, is the largest species of the Grouse family well known for is spectacular mating dance and call, a ritual that begins in spring which may last into June. Most of the time the mating rituals are largely their way of claiming a territory. The hens only participate towards the end of these many dances and calls.

The capercaillie’s diet consists of mostly of berries, leaves and grasses. In winter it lives by eating predominantly pine needles. The young chicks need more protein and therefore insects are added to its diet that they seek on their own. However, the down-covered chicks need to be warmed regularly, especially at night, when the female sits on them. At the age of about 6 weeks the chicks are able to maintain their own body heat.

For more information on this coin and other releases please visit the website of the Austrian Mint.

A wealth of information on the capercaillie is available here.

And if you are interested to listen to or watch the capercaillie ‘in action’, please click here.