October 31, 2013 – The Austrian Mint issues the first coin of a new gold coin series featuring wildlife and celebrating the diverse natural habitats of Europe. A total of six coins to be issued over the next six years will feature the most recognizable European wild animals in their habitats. The 2013 issue honors the red deer (cervus elaphus), an animal found in many forests.

The obverse of the coin was designed and engraved by mint engraver Helmut Andexlinger. It depicts a mighty red deer with a rack of 12 points, calling out its presence. The background is a marshy area often frequented by deer. In the foreground Helmut added some stylised grasses and sedges highlighting the coin’s 3D effect. The obverse also bears the country of issue, “Republik Oesterreich”, the 2013 year of issue and the face value 100 euros.

The reverse was designed and engraved by the Mint’s Chief engraver, Thomas Pesendorfer. He has depicted a family of deer, stag, doe and fawn, posing in a densely wooded forest with a peaceful river in the background. A curious otter and frog look onto the scene. A lovely marsh marigold plant blooms in the foreground. 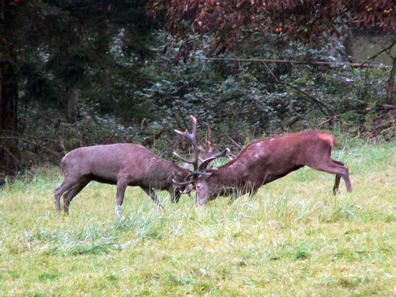 The red deer is found throughout most forests of Europe, Russia, Asia and North Africa. As well, a related species is found in North America, mostly in the west. Fossils indicate that some 12 million years ago the ancestor of today’s deer already roamed parts of the globe.

The rack of the modern stag may grow up to 8 feet in its spread. In spring the antlers have a soft fur covering. The males weigh on average over 350 pounds while the more delicate female weighs in on average at around 270 pounds. Their distinctive coats, for which they are named, become the most reddish brown during the summer months. By autumn their coats thicken to protect them from the cold winter temperatures. In spring the coats once again shed and thin out in preparation for the warmth of the summer.

The red deer like to spend summers in the wooded areas and alpine meadows and come lower down into treed valleys for the winter months. The trees and shrubs provide it protection from the elements. Its diet consists of grasses, and shrubs as well as sedges, and young seedlings. The red deer’s major threat is over-hunting.

This six coin series has the following plan of issue:

For more information please look at the Austrian Mint’s website.

And in this YouTube film you can see red deers in their natural habitat.