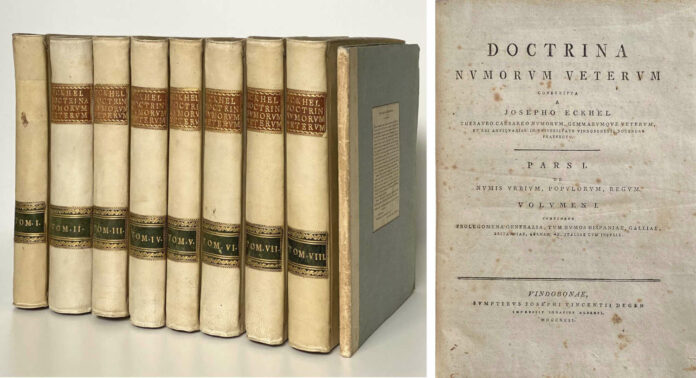 Auction of Numismatic Literature at Solidus

The now eighth Solidus Literature Auction 99 on May 29, 2022 is rich in bibliophilic treasures of the 17th to 19th centuries as well as in rare and sought-after numismatic literature, journals and auction catalogs of the 19th and 20th centuries. Among the magnificent specimens, most of which have been entrusted to the auction house by a proven book lover, are the following works:

The mighty tome with richly decorated half leather spine may be unparalleled in terms of preservation. The 63 plates are engraved with impressive precision.

The individual volumes are all contemporary bound. A complete edition of this work, especially including the mostly missing index volume, is extremely rare.

Another highlight of the auction is a complete edition of the “Doctrina numorum veterum” by Joseph Eckhel, including the extremely rare “Addenda”, which may be considered the starting point of modern numismatic science.

Among the bibliophile books, there are also many attractive editions with rather moderate starting prices, for example:

Bound in full leather with rich gold decoration on the spine, this book is extremely rare, especially in this impeccable state of preservation.

The selection of magazines also contains many a noteworthy issue:

These examples vividly illustrate what a great opportunity to expand any numismatic library this carefully compiled auction offers.

In addition to the bibliophilic works, numerous publications on Numismatics of Antiquity as well as the Middle Ages and Modern times also deserve attention, some of which are still in use, very rare and sought after.

The Literature Auction 99 will take place on Sunday, May 29, 2022 at 5:00 pm CEST as a live auction on the platform Auex. You can place your maximum bids before the auction – or during the live auction, where you can bid on the lots in real time, similar to a floor auction, and actively influence what happens at the auction. Pre-bids are already running.

All lots of the auction can be found in the online catalog.

For further information about the auction house, visit the website of Solidus Numismatik.