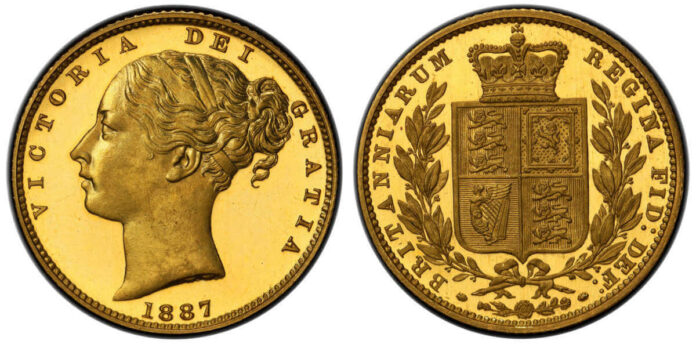 Atlas Numismatics has updated their website with 513 new coins, medals, and tokens at fixed prices. Selections include the following items:

No. 1069703: Great Britain. George III. (King, 1760-1820). 1768 AV Pattern 2 Guineas. NGC PR65✭ Cameo. By John Tanner. London. Edge: Plain. 16.72gm. GEORGIVS • – III • DEI • GRA •. Laureate bust, right / M•B•F•ET•H•REX•F•D•B•ET•L•D•S•R•I•A•T•ET•E • 17 – 68 •. Crowned ornate quartered shield of arms. SCBC-3724; W&R 79 (R4); EGC 667 (Bull); Fr.-351. Medal alignment (En Medaille). Unlike singular Guinea coins, pattern Two Guineas and Five Guineas pieces of George III are of the greatest rarity. Pattern Two Guineas were produced in 1768, 1773 and 1777. The 1768 pattern stands as the first attempt to produce a higher-value gold denomination during the reign of George III, and the quality of its engraving is considerably finer than the later two dated patterns. The first pattern Five Guineas didn’t appear for another two years. Attempts to strike these larger denominations for circulation however never amounted to widespread production as gold coinage saw a major shift downwards in response to the overvaluation of British gold coinage in the 18th century. As a result gold coins were confined to limited domestic usage mainly among the well-to-do. The smaller more manageable single Guinea denomination and its fractions were more common for day-to-day needs than were the larger pieces. This is furthermore reinforced by the introduction of the Third Guinea in 1797 that was until then an unknown fractional denomination. John (Johann Sigismund) Tanner (b.1705 – d.1775) was a native of Saxe-Coburg, who worked for the majority of his career as an engraver for the Royal Mint at the Tower of London. He became the mint’s Chief Engraver in 1741 upon the death of John Croker and remained at his position until his own passing in March, 1775. Tanner was also well known for the design of a sixpence during the reign of King George II, which was popularly known as the “tanner”. Price: $395,000.

No. 1068862: Great Britain. Elizabeth II. (Queen, 1952-2022). 2021 AV Five Sovereign Die Trial Piece. NGC PR70 UCAM (Ultra Cameo). By Jody Clark (Obv.). The Royal Mint. Edge: Reeded. 36.02mm. 39.94gm. Crowned bust, right / St. George and dragon; plus a unique (crown) privy mark used for one year only. The largest coin in The Sovereign 2021 Collection and struck in 22 carat fine gold, the Five-Sovereign Piece for 2021 was not available to purchase individually when originally released. The obverse carries the ROYAL MINT TRIAL stamp as well as production hallmarks in the fields. Includes original case and Certificate of Authenticity No. 1. This is a Limited Edition Presentation of 1. Price: $19,500.

July, 9. 2020
Atlas Numismatics has updated their website with 271 new coins, medals, and tokens at fixed prices. Selections include the following items.
error: