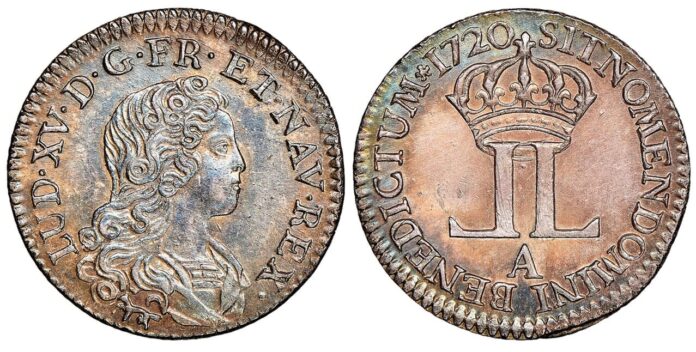 Atlas Numismatics has updated their website with 420 new coins, medals, and tokens at fixed prices. Selections include the following items:

Ex-Schulman Vault Collection (Netherlands), “An incredible selection of ancient coins carefully curated in the early 50’s until the late 80’s by a well-known client of Jacques Schulman.” Price: $29,500.

This piece was used extensively in Louisiana and Canada. John Law had purchased the right to produce coins for his Compagnie des Indes (also known as the Mississippi Company) from the French government. He also produced paper money and bonds in ever-increasing numbers in the 1720-1 period. Wild inflation came about, and a financial collapse was the result, known today as the Mississippi Bubble. Price: $2,450.

Struck “en medaille” and from a reported mintage of just 60 pieces struck. Attractively toned and superior eye-appeal for the grade assigned. Minor hairlines account for the grade; in our opinion this piece is conservatively graded. Price: $89,500.

Atlas will be attending the following numismatic convention:

Organizers plan to reconvene in March 2021 in Baltimore.

Organizers have had to cancel the January event. They plan to reconvene in July 2021.

Organizers have had to cancel the January event. They plan to reconvene in January 2022.

March, 3. 2022
Atlas Numismatics has published their inventory with 542 new high-quality coins, medals and tokens at fixed prices, including a beautiful collection of modern European gold coins.