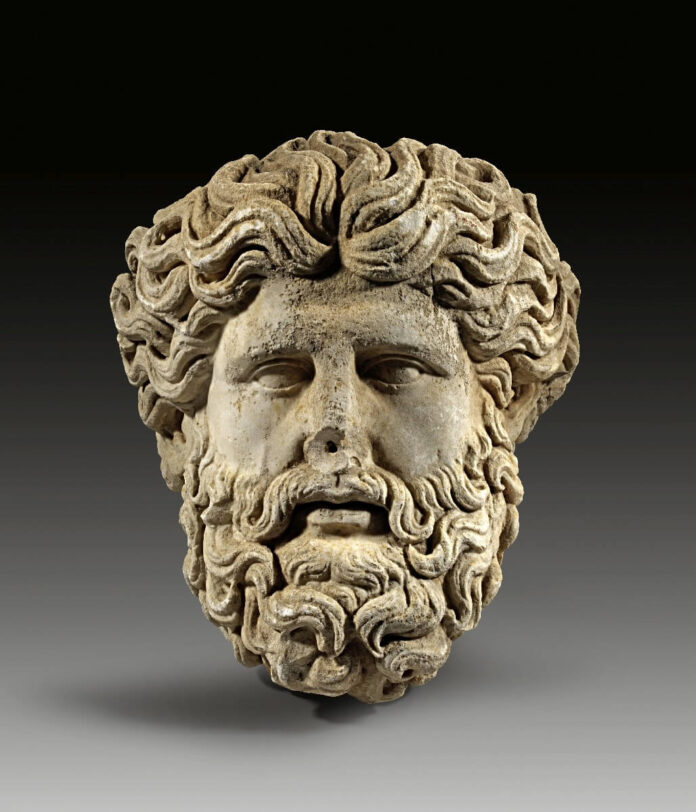 Accompanying auction 275 taking place on 16th December 2020 at Gorny & Mosch, a splendid print catalogue has been published. More than 830 lots will be sold, including several pieces from the collection of Bernhard Wicki (1919-2000), a famous German director and actor. Among the African objects you can once again find pieces from the Karl-Ferdinand Schaedler Collection, who is an expert on Africa and prepared this section of the auction sale. Furthermore, a comprehensive collection of ancient lamps will be on offer including both bronze and clay lamps from the 7th century BC to the 7th century AD Added to this, once again a large number of icons from different collections will be auctioned off in this sale. The selection of Greek vases and marble sculptures is especially remarkable.

Attic hydria, manner of the Taleides Painter. About 540 BC. H 37.8cm. Black-figure, details richly colored in red and white. On the corpus a large image, sides bordered by ivy branches. The image depicts a bearded man in a richly decorated coat with lance and a warrior in a four-horsed chariot to the right. In the background, a hoplite with shield and lance. Underneath it, a frieze of animals showing two swans and panthers, in the center a grazing hind. On the shoulder between four young men in coats the fight between Herakles and Triton. Reassembled from large fragments with few small retouched areas.

Provenance: Since 2012 in Germany; purchased between 1900 and 1920 for a French collection, after that in family property.

Provenance: From the private collection of D.K., New York, purchased between 2000 and 2010.

Monumental head of male god. Roman Imperial Period, 2nd quarter 2nd century AD. White, fine crystalline marble. H 38cm. Almost completely three-dimensional, over life size relief head of a bearded man “in his best age”, slightly turned to the right. The sumptuous hair flows in radial, irregular curls from a hair whorl at the center of the forehead and streams backwards as if there were a gust of wind coming from somewhere in front of the head. In a countermovement, the curly, woolly beard is combed forward in thick strands and ends in a claw-formed lock at the chin. The idealized face only displays little signs of age, which are visible in the somewhat soft, fleshy carnation.

Provenance: From the Willi Wiborny Collection, Oranienburg (1931-2018). In family property at least since the 1980s.

Ephebos. Etruscan, late 6th century BC. H 11.5cm. Tripod finial, full cast. Walking, nude ephebe in the Archaic style with curly hairstyle that falls down his neck and back. The end of the curls, a necklace, the eyes, nipples and navel are indicated by punched circles created in a cold work process. Attractive olive green patina, intact.

Gold applique in the shape of a lion head. Achaemenid, 6th – 4th century BC 4.42g. Made by hammering a single sheet of gold and cutting out the open parts. Head of a roaring lion with slightly opened mouth, the incisors of the upper and lower jaw as well as the tongue are visible, looking to the right, the eye is depicted from the front. Whiskers can be seen on the cheek. Above the mane a pointed ear. The mane consists of eleven strands which are arranged radially and end in a volute. On the reverse five eyelets made of gold wire. Meant to be worn on a robe, several pieces were sewn on the fabric. Gold. Magnificent work of the ancient art of jewelry making. Three strands of the mane broken at the hairline.

Splendid composite idol. Bactria, late 3rd – early 2nd millennium BC. H 12.7cm, W 9.3cm. Of lapis lazuli and limestone. Head, arms and a foot made of limestone and inserted into the corpus. On the head a turban-like headgear made of greenish chlorite with engraved decoration. Ears, eyes, nose and mouth modeled, neck and part of the upper body attached to the body in the form of a bust. Hands and forearms resting in the lap, the right foot and part of the lower leg attached to the lower edge of the body. The corpus depicts a seated female figure, whose details are hidden under a wide robe with geometrical, incised decorations. Corpus worn with missing fragments, head, arms and foot worn.

Provenance: From the K. G. Collection, Rhineland, purchased in the German art trade 1960s to 2003.

Bronze mortar. Central Asia, Khorassan, 12th – 13th century. H 13.5cm. Bronze with copper inlays and engraved. Round cylindrical vessel with flat bottom, slightly protruding rim and knobs on the body. Plaited band on the inside of the rim, on the outside vegetative tendrils, at the bottom sort of a band with waves at the rim. On the corpus medallions with peacocks inlaid in copper. The pestle with a small sphere on one end and a pommel on the other. In the lower part a plaited band, in the upper part below the pommel a band with Arabic inscription. Green patina, intact.

Provenance: From the K. G. Collection, Rhineland, purchased in the German art trade 1960s to 2003.

Anthropomorphic Bust. Nok, Nigeria, 500 BC. – AD. 200 H 43cm. Light brown terracotta. Large figure wearing sort of a cap and adorned with a large necklace made of numerous strings of beads with a pendant. Head was probably broken and has been glued, arms broken off.

Provenance: From the private collection of U. H., southern Germany; in Germany since 1995.

Large Tumi. Lambayeque, 800 – 1100 AD. H 36cm. Downwards pointing Tumi made from thin sheet silver, rolled and hammered. On the handle a warrior with an enormous crescentic headdress crowned by a comb with openwork ornaments. The face of the figure is framed by two large earspools. Wearing a short tunic and trousers. The decorative patterns in the metal are reminiscent of embroidery. Fixed on a flat surface, minor spots in the material, otherwise in a very good condition.

Standing figure of dignitary or warrior. Veracruz, Totonac, ca. 300 – 1200 AD. H 52cm. Bright clay. Standing figure wearing a short apron, arms with big hands hanging down to the sides, shoulders marked by black, dotted scarifications. Around the neck he wears a double ribbon tied to a bow in the front, on the head a flat hat or helmet with wings at the sides and a sickle-shaped ornament fastened with a chin strap; large, twist type ear ornaments. Mouth, scarfications and pupils colored with black “chapapote” (naturally occurring tar). On his feet, he wears sandals decorated with bows in the front. Reassembled from several pieces.

Provenance: From the R. Villinger-Schmeller Collection, Bavaria, purchased before 1980.

Head of Gautama Buddha. Central Thailand, U-Thong, 1st half of 15th century. H 30.5cm. Bronze cast with remains of the original core used in the casting process. Expression of a state of deep samadhi, elongated head and long, slightly pointed ears. Greenish patina, broken at neck, a breakage in the back of the head around 13cm, top of the ushnisha missing.

Great figure of Vajrapani. Sinotibetan, 18th – 19th century. H 26cm. Gilt bronze, cast in three parts, colored details. The wrathful deity, protector of faith and Lord of Secrets – Vajrapani depicted in pratyalidhasana in front of a flaming mandorla. In his right hand a vajra scepter, in his left a lasso, performing the mudra of anger at the heart. A tiger skin covers his hips and a band sways over his shoulders; body adorned with jewels; over the red fire-like hair a crown of five skulls. The wrathful expression of his face is highlighted by the three wide opened, realistically painted eyes. The bottom of the lotus base closed and decorated with a double vajra. Masterpiece! Gilding and pigment partially rubbed off, a foot of the mandorla repaired, otherwise very good condition.

Provenance: From the A.E.O. Collection, Rhineland; purchased in the Rhineland in 2008 or 2009.