September 15 – The Austrian Mint issued on September 7, 2011 the fourth coin in the silver coin series “Rome on the Danube.” The new coin features the thriving town of Aguntum, a well-established center of commerce and trade, founded as early as 30 BC.

The obverse of the coin shows the profile of Emperor Constantius II on the right. During his reign Aguntum experienced its greatest economic boom. Highlighted in the background are the remains of a gate located in the artisan quarter of Aguntum. The obverse of the coin also bears the country of issue “Republik Oesterreich,” the year of issue 2011, in the road coming through the gate and the face value 20 euros. This side was designed by mint engraver Herbert Waehner.

The reverse depicts a market scene in Aguntum. Elevated to a municipality 2,000 years ago, it was the centre of trade in the region. In the foreground, a merchant is offering some earthen vessels containing olive oil and wine to a woman on the right of the design for potential purchase, while two passersby stroll along. They are all located in front of a variety of buildings of the forum. In the distant background are the Lienz Dolomites. Helmut Andexlinger designed the reverse.

Not all Roman sites in today’s Austria were military. Aguntum in today’s East Tyrol lies just four kilometers east of the provincial capital of Lienz in the municipality of Doelsach. It was a civilian settlement primarily concerned with trade and commerce. Its distance from the Danube limes meant that it had neither a military garrison nor fortified walls. Being further south Aguntum was founded earlier than many other sites, perhaps as early as 30 B.C. It was situated on an important transit route from Aquileia in the south, from Virunum in the east and further west down into fertile northern Italy. The settlement flourished during the reign of the Emperor Constantius II (337-361).
It was administered by a 100 strong council and two “mayors” (duumvirn). There were two aediles to look after the economy and security, and a quaestor to oversee finances and collect taxes. Among the most important goods traded in Aguntum were metal (Noric iron), timber, cattle, resin and cheese. Such a prosperous and relatively defenseless city was a choice target for barbarian raiders and in later times the town was plundered several times and suffered destruction more than once. Aguntum, however, remained inhabited into the 5th century A.D., after which it was abandoned, as were so many other Roman settlements during the barbarian invasions and the collapse of imperial authority. 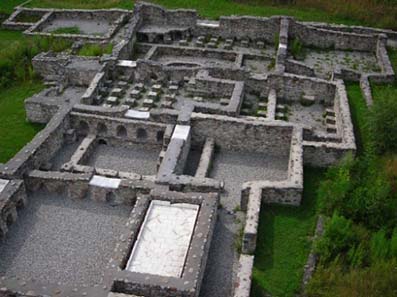 The ruins of Aguntum were known as early as the 16th century. The people of the time found the remains of the hypocaust (the below floor heating system) and incorrectly concluded that the town had been a settlement of dwarfs! Excavations continue from the 19th century to the present day. In 2005, a new museum was opened for the public at the site of the ancient Roman city: Municipium Claudium Aguntum.

The 20 Euro coin is struck in proof quality only; the maximum mintage is 50,000 pieces. Each coin is packed in a box with an informative numbered certificate of authenticity. A wooden collection case for the entire series may be purchased separately.

For more information on the Austrian Mint and the other coins of the “Rome on the Danube” series, visit this website.

If you want to learn more about the archaeological site, click here.