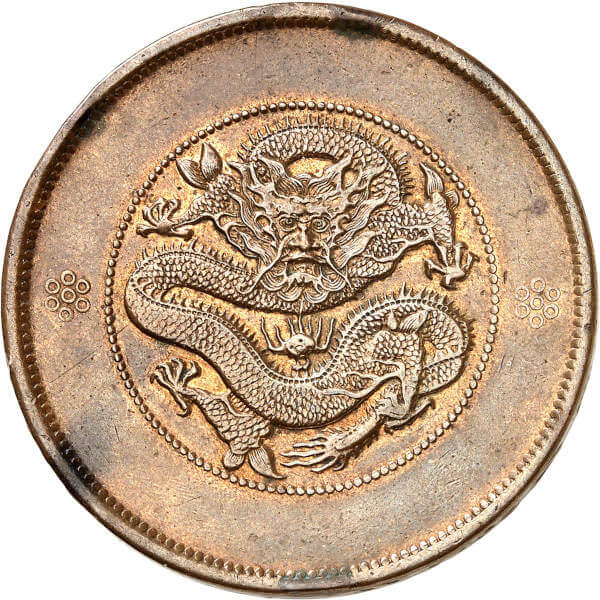 Over the course of the past years, several patterns of Chinese coins appeared in Germany. That is no coincidence: German engineers played an essential role in equipping Chinese mints. And in order to demonstrate the efficiency of the machines to their clients, they produced patterns. Some of them were passed down as family souvenirs and an increasing amount of them came to light in recent years.

A pattern of the Dragon Dollar for the Yunnan Province illustrates the extent to which German companies supplied the machinery for Chinese mints. The specimen will be sold by Heidelberger Münzhandlung in its auction 83 from 8th to 12th November 2021.

Where China Purchased Its Minting Presses

Richard N. J. Wright summarized in his article “The Silver Dragon Coinage of the Chinese Provinces, 1888-1949”, Numismatic Chronicle 16 (1976), pp. 167-200, what Western sources report about the equipment of Chinese mints. This table shows the mints about which he knows where they obtained their presses.

How Many Minting Presses China Bought and How Much They Spent

Thanks to an archival document published in German by Paul and Ulli Arnold in 1991, we can identify the unknown suppliers of the equipment of the mint of the province of Yunnan. The document is a travel report of the Muldenhütten metallurgist and mint master Theodor Choulant.

During a business trip he made from 7th April to 4th May 1905 to see all major mints in Germany, Choulant also visited two important machine factories. Both of them were working on a major Chinese contract, which must have been equipping the Yunnan mint.

Choulant reported: “On his way from Munich to Stuttgart, the undersigned visited the machine factory of Louis Schuler, Göppingen, which manufactures minting machines and supplied the local friction press and an engrailing machine. Upon request, a minting machine, which was destined for China along with 29 others, was put into operation.”

A little later he states: “The undersigned had the opportunity to visit this factory [the German Weapons and Munitions public limited company / Deutsche Waffen- und Munitionsfabrik Karlsruhe (DWM)] thanks to the kindness of mint master Lentner. The company was busy with the production of about 90 minting presses for China, which is why a large workroom was dedicated exclusively to the production of minting presses. They were similar to Schuler’s but somewhat bulkier and therefore more expensive (6,700 marks : 7,500 marks).”

So we can learn from his report that in 1905 a total of 120 minting presses was produced in Germany, the contract value amounted to 876,000 reichsmarks. It becomes clear how important these orders were if you keep in mind that the Karlsruhe mint had just 4 Uhlhorn minting presses at the time and had another one built by DWM Karlsruhe. Even Berlin, where international orders were carried out, had “only” 22 minting presses.

Another Pattern from Göppingen

So it is not particularly surprising that new patterns from old German families keep turning up. In 2012, the numismatic community first heard about patterns that were minted in 1897 and 1898 by Schuler with dies by Otto Beh. We know for sure that Schuler was commissioned in 1895 – probably in the context of the Leipzig Trade Fair – to manufacture presses for Fengtien, perhaps the company also had a supply contract with Beijing.

This pattern was probably also created in Göppingen. The edge inscription GOTT SEGNE VNS suggests it. Only one other coin with this edge inscription is known. It was sold in 2010 in Macau by Champion Macau Auction.

Both pieces feature an edge inscription that was not carried out properly. The letters are neither evenly distributed nor placed at the center of the edge. Thus, they are actual patterns used to adjust the engrailing machine. We know from Choulant’s writings that Schuler was already producing such machines at that time. Around the turn of the century, the engineering company had expanded their product range significantly. The Muldenhütten mint director also described rolling mills for the production of metal strips made by Schuler and piercing machines used to cut blanks from the coil.

Therefore, it is likely that Yunnan did not only order coining presses from Schuler but also other equipment used in the production process from creating the coil to the final minting, including the engrailing machine used to create this pattern.

The timely production of all these machines might have been too much for Schuler, so that part of the contract value had to be outsourced and was carried out by the more expensive German Weapons and Munitions company.

A brief remark at the end: If you are wondering why a company that had been founded for cartridge production was able to handle a massive order of minting presses, you need to keep in mind that even today the production of cartridges and that of coin blanks are quite similar from the technical point of view. With some minor adjustments, minting presses can be used to produce cartridges. Let us hope that that will never be necessary.

The presented coin will be offered in auction 83 of the Heidelberger Münzhandlung.

The Schuler coin minting presses are a real German export hit. They are used not only in China but all over the world.

In a similar way, Chinese coin dies also first find their way into a German auction and later to the Moritzburg.

May, 13. 2021
After 37 years Schuler will deliver its 1000th high-performance minting press to the Bavarian State Mint. The 150-ton press not only produces bi-metal and tri-metal coins in a single operation but can also process translucent polymer rings as in the popular collector coins.
error: