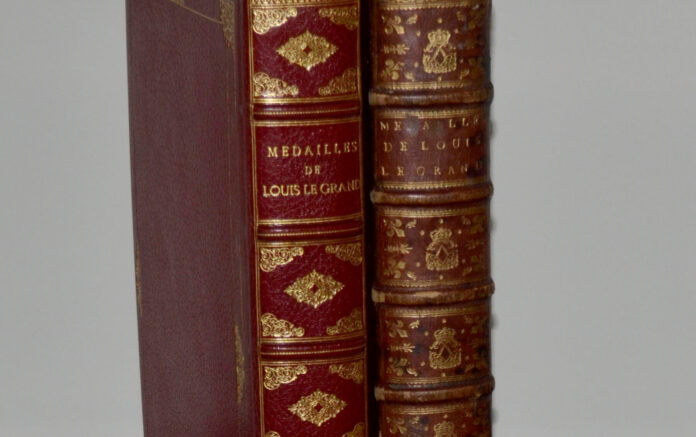 “My appreciation for you, gentlemen, can be estimated by the fact that I entrust you with what is most precious to me in the world: my glory.” This is what Sun King Louis XIV is said to have told the members of his Petite Académie. Louis had installed the latter in 1663 for the purpose of producing his medals – in the exact manner he and his ministers imagined them to look like. No other monarch before or after him used medals as such central elements of self-presentation: The Sun King had understood the possibilities they offered.

Especially when it came to spreading his carefully conceived “image” throughout Europe, medals were ideal means. They were given as diplomatic gifts to envoys or sent to other rulers – according to their rank and importance in bronze, silver or gold. And often they did not receive single specimens but entire series, sometimes of more than a hundred of medals. The Académie invented and minted medals on all possible “glorious” occasions, whether it be a success in one of the Sun King’s numerous wars, an episode from Louis’ personal life, a technical advance or a new building.

A single medal reports on a single event. But Louis produced not only a single one, but incredible amounts of them. Therefore, they tell the story of his reign – they are a histoire métallique.

Well, actually they rather tell how the king would have liked others to perceive history. This becomes particularly apparent when the fortunes of war favoured France’s enemies: Great defeats were omitted, and the most insignificant victories celebrated on medals. In the case of some battle defeats, the medals even corrected the battle’s result in favour of France!

In order to make the constantly increasing number of medals known all over Europe, in 1702 the Académie published “Médailles sur les principaux événements du règne entier de Louis le Grand, avec des éxplications historiques” (=Medals on the most important events of the entire reign of Louis the Great with historical explanations). This work depicted and commented on all official medals of the king. It was an epoch-making idea with far-reaching implications. Because of this, even those who were not important enough to receive a series of hundreds of medals were able to admire the masterpieces of the propaganda of glory. And they loved doing that! Already the edition of 1702 was reprinted and translated all over Europe. In this way, the French medals – even though not in their minted form – were spread and then imitated. When it came to the self-presentation of rulers and their reign, even Louis’ enemies had no choice but to imitate him. That’s how much influence the court of Versailles had all over Europe!

The work’s first edition comprised 286 medals. The books auctioned at Künker’s have even more to offer! The reason is that they stem from 1723 and are thus second editions published after the king’s death. They present the Sun King’s entire histoire métallique: from a medal commemorating his birth in 1638 to a medal on his death of 1715, a total of 318 commented medals.

Whoever has such a volume at hand understands the full dimensions of this political strategy and the role medals played in it. Unlike Renaissance medals, French medals were not the result of the artistic work of a single human being. They were a unified, state-controlled tool of highest artistic quality, and none of their details was left to chance.

Conveying their masterly conceived messages and the new stile was unquestionably their main purpose, therefore, the real medals were of secondary importance and it became possible to replace them with impressive catalogues.

The British numismatist Sir Mark Jones described the book on the entire medal history of 1723 as “an extraordinary work, unparalleled in magnificence and technical accomplishment either in contemporary Europe or in the history of the medal.” We can only agree with that!

This eLive Auction will take place on 11 and 12 December 2019. You can find an overview of the offered numismatic literature on Künker’s website.

January, 20. 2022
Our cities have evolved through history, and every architectural detail is connected to this history. We explain why the Munich Schrannenplatz (Grain Market Square) was renamed Marienplatz (Mary’s Square), using coins that will be on offer at Künker’s 2022 January Auction Sales as illustrations.
error: