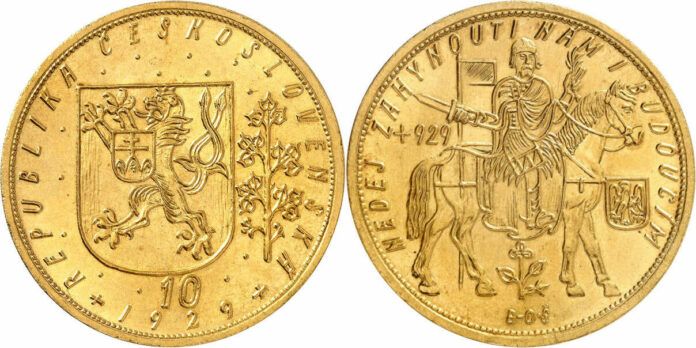 On 28th October 1918, the representatives of the four Czech parties declared the independence of the Czechoslovak Republic. Tomáš Garrigue Masaryk (1850-1937) became the first Prime Minister, and Edvard Beneš (1884-1948) the first Minister of Foreign Affairs. At least as important but way less known in Central Europe was Alois Rašín (1867-1923). He served as Minister of Finances and managed to prevent the young republic from getting caught up in the whirl of German-Austrian hyperinflation.

A Healthy Currency Based on the Austrian Korona

The Austro-Hungarian bank held the privilege of issuing banknotes in the Royal and Imperial Empire. Rašín did not care about that. He created the Czechoslovak koruna in April 1919. To avoid any interruption of payment processes, he equated the Czechoslovak koruna with the Austrian korona so that old banknotes could continue to circulate. However, he did not want the Czechoslovak koruna to be caught up in the inflation that was on the rise in Austria at the time – and ended in 1923 when 10,000 paper korona were exchanged for one schilling. Therefore, he had all “Czechoslovak” banknotes marked with a stamp and replaced them with new banknotes as soon as possible. In this process, part of the banknotes was kept by the bank, which reduced the amount of circulating money.

The result was impressive: while the currencies of neighboring countries were crashing through the floor, prices were decreasing in Czechoslovakia. The Czechoslovak koruna remained stable. The decisive factor was obviously the tremendous economic power of the young nation. In terms of industrialization, Czechoslovakia ranked among the top countries of the world then.

The Czechoslovak national bank started issuing gold coins of one and two ducats in 1923. This may well be understood as a deliberate step which made the policies of stability pursued by the Czechoslovak national bank tangible for everyone. On the obverse, these coins depict the double-tailed Bohemian lion, on its chest a small shield with the Slovak coat of arms: a double cross on a mountain with three peaks. On the reverse we can see a head-and-shoulder portrait of St Wenceslas with banner and the eagle shield of the Přemyslids, designed by the painter Jaroslav Benda and adapted for the coin by Otakar Španiel. The signatures of the artists feature on the bottom to the saint’s right and left. And there was a good reason for choosing St Wenceslas as the motif for this issue.

Let’s start with some facts about the historical King Wenceslas. He was born around 908 as the son of the Přemyslid prince Vratislaus I, who succeeded his brother in 915 as ruler of central Bohemia. This made Wenceslas heir to the throne. At some point in 924 or 925, Wenceslas ascended to the throne. He took over a difficult task. There were numerous competitors, not just among the noblemen of the surrounding areas but also within his own family. In addition, there was the fact that the royal family, including Wenceslas, professed Christianity whereas a large part of the nobility and the entire people did not. It might have been Wenceslas’ undoing that the German King Henry I militarily forced him in 929 to pay tribute and thus to accept the German King’s sovereignty over Bohemia. Within the same year, Wenceslas fell victim to a conspiracy, which his brother is said to have initiated. The year of his assassination, however, is disputed: historians started to consider an alternative date as early as in the 18th century: 935/6.

As I said, these are the facts. When it comes to legends, there is far more to say about St Wenceslas. After all he was a Přemyslid prince and thus the direct ancestor of many Bohemian rulers. Having a well-known saint in your dynasty was a question of prestige at the time. To boost Wenceslas’ fame, rulers and the Church jointly promoted the writing of Saints’ Lives early on.

In this way, St Wenceslas became the patron saint of Bohemia. In the history-loving 19th century, this saint, whose real existence – unlike that of many other saints of the Catholic Church – could actually be proven, became a figure people strongly identified with in the time of Czech nationalism and that was also adopted by the Czechoslovak Republic after 1918.

After all, young nation-states needed a national myth, which often proved that their nation had already existed centuries before it was founded. Festivals relating to historical events that happened before the country was founded were a tried and trusted means to create such a national perception of history. Therefore, many politicians understood the potential of the anniversary of St Wenceslas’ death: 1929 was close enough to use it to shape the identity of the young nation.

Thus, the government joined the endeavors when numerous Christian associations and societies started to plan events to celebrate the anniversary of the saint’s death at the latest in 1922. A key figure was Antonín Podlaha, the suffragan bishop of Prague. Besides being a high-ranking official of the Roman Catholic Church he was an enthusiastic historian who taught church history at the Charles University in Prague. He came up with the idea of completing the construction work at St Vitus Cathedral in the year of the anniversary of St Wenceslas’ death and to celebrate the completion of the cathedral at the day of the Millennium. He was also in charge of the archaeological excavations carried out during the construction work and made the church treasure, which included many relics of St Wenceslas, accessible to the public.

As mentioned above, the nine ducats that had been minted by the Kremnica mint since 1923 featured the portrait of St Wenceslas, and in 1925 St. Wenceslas Day was declared a public holiday. Today, this day is a public holiday once again.

In the same year, the day of the death of another national hero, Jan Hus, on 6 July also became a national holiday. This caused the Catholic Church to break off all diplomatic relations with Czechoslovakia – a conflict that was not settled until a concordat was signed in 1928.

In that very year, Czechoslovakia issued commemorative coins celebrating the 10th anniversary of the Republic. The reverse shows the coat of arms of Czechoslovakia. Above it, St Wenceslas is depicted with a banner, his hand raised to take an oath. Behind him, the resurrected knights from Mount Blaník gather. Thus, the coin refers to another national myth: the last brave Hussite fighters are said to have retreated to this mountain. Just as Emperor Frederick lies in Kyffhäuser hill in Germany, these fighters are sleeping there until their motherland will be in the greatest need – then they’ll wake up and defend it under the lead of St Wenceslas.

The obverse is also dedicated to a saint: St Procopius. The patron saint of miners – one of them is depicted in the background, descending into a mine shaft – guides the plough, with the devil harnessed in front of it. Legend has it that this is how he ploughed a deep valley – the so-called Devil’s Furrow – into the earth near the Sázava Monastery, which was founded by him. The translation of the inscription reads: I am made of Czech metal. The fineness and a K for the Kremnica mint were punched into the reverse. To the right, there is the name of the creator of this motif: Otakar Španiel.

Following these preparations, the festival lasting several days began on 28th September 1928 throughout Czechoslovakia to celebrate the 1000th anniversary of the death of St Wenceslas. The main event was held in Prague. More than 600,000 people – other sources claim it was 750,000 – are said to have participated. President Masaryk, the patron of the celebrations, held the main speech. He celebrated Wenceslas as a role model of the young republic whose humanity and moral behavior should be exemplary for everyone.

He emphasized the secular aspects of the saint, a fact that was strongly criticized by the representatives of the clergy. They also criticized that the representatives of the Czechoslovak government had been notably absent from the solemn mass celebrated at St Vitus Cathedral, which had just been completed. They weren’t the only ones to complain about the event. Progressive politicians were scandalized by the fact that it was not the critic of the Catholic Church Jan Hus but St Wenceslas who was glorified as the key figure the Czechoslovak people should identify with.

Be it Catholics, communists, or liberal citizens – nobody could avoid St Wenceslas in those years. An enormous exhibition was dedicated to him. Additionally, the director Stanislav Kolár made a costly silent film, one of the most expensive productions made in the entire world at the time. The amount of one million koruna provided by the government did not even cover a quarter of the total cost. The film was not completed until 1930, but at least it was released before the 3-volume commemorative publication edited by Karel Gunth was published in 1934.

And, of course, the 1929 festival was a perfect occasion to adorn further coins with the image of St Wenceslas. Thus, magnificent gold coins of 5 and 10 ducats were issued in 1929 for the first time. They depict St Wenceslas riding his horse, in the field the year of his death 929. The small signature at the bottom rim of the coin refers to the artists Jaroslav Benda and Otakar Španiel.

On the same occasion – and not to celebrate 1000 years of Christianization in the country as many catalogs claim! – three commemorative coins featuring the same motif of one, three and six ducats were released. One side features Wenceslas standing with banner and eagle shield, the other side depicts the ruler riding a horse, accompanied by two angels.

One may well wonder to what extent the monument in Wenceslas Square, which was created in 1912, influenced the numismatic depiction of the saint. But, don’t forget the possibility that all artists were inspired to create similar depictions of the saint after examining the relics of St Wenceslas that are kept at St Vitus Cathedral today. Especially the St Wenceslas helmet, a helmet type that was widely used in the 10th century and which we are familiar with mainly from the depiction on the Bayeux Tapestry, is characteristic of the ruler’s image.

It is hardly possible to avoid St Wenceslas when travelling to the Czech Republic today. His statues can be found both in the secular and ecclesiastical context. Instead of the historical figure of the saint, they are rather reminiscent of the will of a young people to become a strong nation.

Here you can find the Künker auction 359 online catalogue.

And we also published a comprehensive preview of Künker’s January auction sale 2022.

November, 7. 2019
Lots with a total estimate of about 7 million euros were sold for 11 million: That is the result of Künker’s Fall Auction Sales 2019. We present the top five, plus the top five Greek coins and an interesting coin for a small budget.
error: