September 20, 2012 – The whole world on a coin? It may sound far-fetched, but using the latest nanotechnology, Coin Invest Trust has created a coin for the island nation of the Cook Islands that manages to capture a detailed map of the world on a chip the size of a fingernail. This extraordinary stamping is titled ‘Nano Earth.’

Depicted on the front of the coin is a portrait of Queen Elizabeth II, the Cook Islands’ official head of state. In addition to featuring the lettering of both the queen’s name and the name of the issuing country, the nominal value of 10 dollars is also provided on the bottom of the front of the coin.
In the middle of the reverse of the coin, a colourful satellite image of the globe is held in the palm of a hand. To the left and right of this, the continents appear again as dot graphics. The year of issue, 2012, appears on the bottom in the exergue. The title of the series, ‘Nano Earth,’ runs along the upper rim, and graphically positioned within the ‘O’ is a stylized microscope set. The motto ‘Hold the World in the Palm of Your Hand’ runs in smaller letters underneath the title. Integrated in the middle, between the upper lettering and the image of the globe, is a 4.5 x 8.6 mm nano chip, which has been engraved with a detailed map of the world using a highly specialized procedure.

Coins tend to offer a unique reflection of the time in which they were minted and issued. We are living in an incredible time, one in which mankind has come to know and understand the world and its wonders better than ever before. We have at our disposal the ability to dabble in space, explore Mars, and explore the furthest reaches of the deepest seas. What’s more, we are now also making forays into the smallest and most hitherto inconceivable pieces of matter, discovering and unraveling the mysteries and limitless potential of the tiny dimensions of nanotechnology; and with it, we are opening up a boundless new world of opportunity.
It’s just this technology that Coin Invest Trust has made use of in this spectacular coin, giving us no mere schematic representation of the earth, but a map so detailed and information-laden that it rivals those found in an atlas. 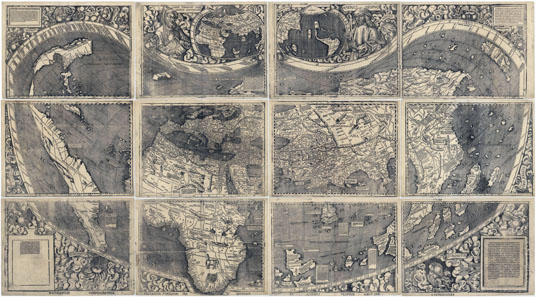 The world map of Martin Waldseemüller from 1507 indicated the recently discovered continent for the first time ‘America.’ Source: Wikipedia.

Using a sophisticated procedure, nano chips no bigger than 4.5 x 8.6 mm were produced in a dust-free environment and in an extreme vacuum, then engraved using the most cutting-edge microelectronics technology. The entire world is captured on this tiny chip, at a resolution of an incredible 155 megapixels! Test out your best magnifying glass and see if you can make out everything!
Nanotechnology actually has its origins in research that began in the 1950s, but use of the term only dates back to the 1970s. Nanotechnology and its associated subareas are concerned with nanostructures, objects on the scale of individual atoms and molecules up to a maximum size of 100 nanometres. Think of it this way – it’s a technology that is restricted to structures no bigger than one ten thousandth of a millimetre! The Nano Earth coin is a vivid example of just what can be achieved within this innovative field of research. And this is just the start. Widespread application of nanotechnological structures in all facets of daily life is yet to come.
With this coin of .925 silver, you truly do get to hold the entire world in the palm of your hand. This extraordinary edition is limited to only 1,000 minted pieces in proof quality.

The coin is minted by the Mayer Mint. Collectors can purchase the series through specialty dealers.

You can read more about this and other coins on the website of Coin Invest Trust.

If you want to learn more about nanotechnology you may check out the website of the Center for Responsible Nanotechnology.

On Nano-tech now you have lots of information made available.

Nano.gov presents you the National Nanotechnology Initiative of the USA.