August 3, 2017 – There is no discipline more international than numismatics. 120 nations are represented by the readers of CoinsWeekly. Some of these come from New Zealand. Reason enough for us to take a close look on what’s going on there in terms of numismatics; especially since exactly 50 years ago, on July 10, 1967 New Zealand has replaced the British system, consisting of pounds, shilling and pence, with the decimal system. To mark this, the Numismatic Society of Auckland and the Royal Society of New Zealand held a major numismatic festive event. What a splendid occasion for a visit!

Auckland. View of the city center, as seen from the harbor. Photo: UK.

In Auckland, there are of course coin dealers, several in fact. Firstly, there are Colonial Collectables, and Antiquarius, the latter specialized in ancient coinage and ancient art. Then there are the Auckland Collectors Centre, CC Coins, and Peter Eccles. This makes five coin dealers in the country’s biggest conurbation with nearly 1.5 million people. 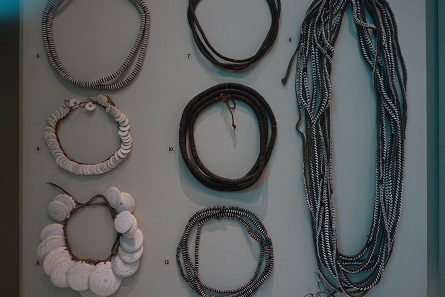 As the most important museum of Auckland, Auckland War Memorial Museum also houses numismatic items – even if they don’t figure prominently. There is a small and barely visible coin collection. What’s on display, on the other hand, is one of the most diverse collections of pre-monetary forms of money from Oceania I have ever seen. A large showcase focuses on the money from the Pacific Islands, two others on trade. Countless other items that served as means of payment in the past are dispersed among the showcases illustrating the various regions. 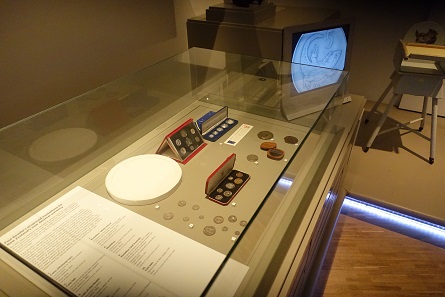 A small specialized exhibition on the decimal system. Photo: UK.

To celebrate 50 years of decimal system, Auckland War Memorial Museum even organized a specialized exhibition, albeit on a small scale.

Order of Corporal Cyril Bassett, the first cititzen of New Zealand ever to be awarded a Victoria Cross for bravery at Gallipoli. Cyril Bassett was fortunate enough to die only with 91 years of age, at home in his bed. Photo: UK.

Not numismatics but phaleristics as a neighboring discipline constitute the focus of Auckland War Memorial Museum. This is no surprise, for an entire floor is devoted to the memory of the various wars New Zealand took part in. Here you can find orders and decorations, with detailed information on the recipients. 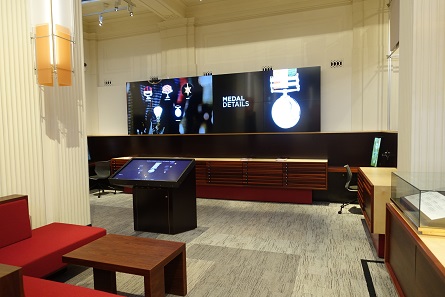 The entire collection of orders is open to the public. A computer inventory facilitates the search. Photo: UK.

In the library, the entire collection of orders is open to the general public. The orders are placed in large drawers in a big cupboard. If you want to learn more about individual items, you can access printed catalogs and a computer. 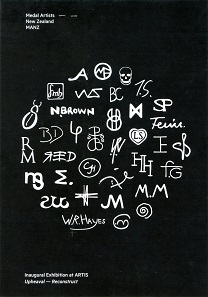 As far as the numismatic side is concerned, Auckland has even more to offer. Representing 34 contemporary medalists, Artis Gallery organizes annual exhibitions that focus entirely on this art form. In 2017, the works of the Medal Artists New Zealand (MANZ) were shown under the title ‘Upheaval – Reconstruct’. If you want to learn more about New Zealand’s contemporary art of engraving you should visit the gallery’s informative website that also includes the CVs and works of several artists.

It’s easy to see that Auckland has definitely something in store in terms of numismatics. And the ‘Decimal 50 Conference Auckland’ proved this city, and the whole of New Zealand, to be the home to many collectors. Nearly 100 attendees came, from every corner of New Zealand, both from the North Island and the South Island. Also some guests came from Australia, not to forget some collector friends and speakers (the only reason for Dr. Ellen Feingold, the curator of the National Numismatic Collection at the Smithsonian Museum / Washington, to cancel was that she had given birth to a daughter shortly before; warmest congratulations, Ellen!!!) The two societies even bore the expenses to invite a speaker from Germany who is also the author of this report. 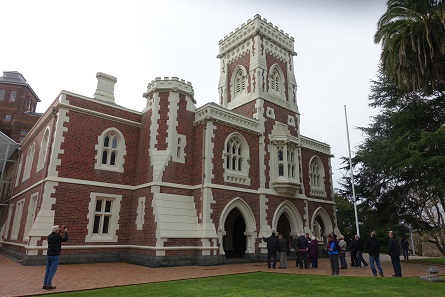 Tour to the Supreme Court of Auckland. Photo: UK. 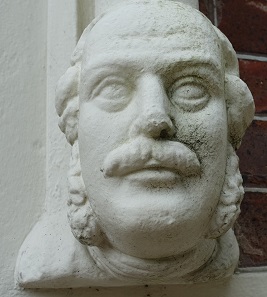 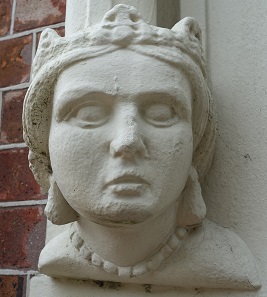 The sculptural decoration was created by Anton Teutenberg, a die cutter of German and New Zealand origin. Photo: UK.

The first attendees arrived on Thursday. Friday, July 14, 2017 kicked off with a numismatic bus tour through Auckland. An exchange afternoon followed next, the hall being reserved for collectors only. The day was concluded by the official conference opening by the President of the Numismatic Society of Auckland, Jim Duncan. 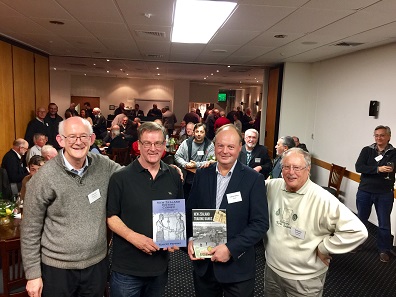 Under the program, there were also two new books presented to the public: Robert Pepping introduced his history of the coinage of New Zealand 1933-1965. Here you can find a book review.
Andrew Clifford presented his overview of New Zealand trading banks and their early banknotes. 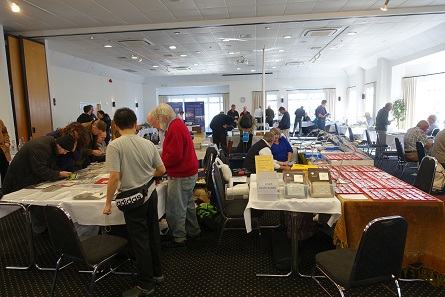 View inside the hall. Photo: UK.

Saturday was under the banner of a major coin fair, with 16 exhibitors from New Zealand and Australia attending. To the European ear, that doesn’t sound much. The dealers, though, were quite happy. While Europe has almost too many coin fairs, the local collectors rarely encounter this many dealers in one place, and so they took the chance to enrich their collections. 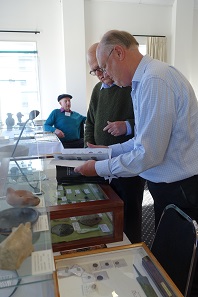 Impressions from the fair. Photo: UK.

Ranging from ancient times to the present, from New Zealand strikings to world coins – every wish was fulfilled. The offer of banknotes was particularly rich, for they are highly popular in New Zealand. 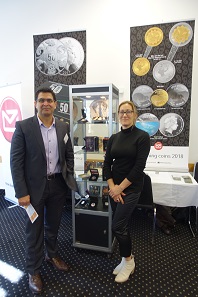 A special highlight was the booth of New Zealand Post as issuer of the country’s present-day commemorative coins, and the booth of Bank of New Zealand that promoted its new website on the history of money that is planned to replace the earthquake-hit museum in Wellington. 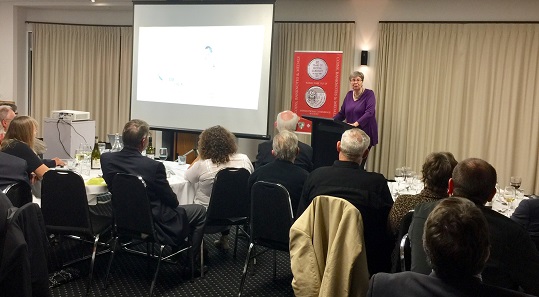 In the evening, David Galt, President of the Royal Numismatic Society, welcomed the guests of the gala event. It was impressive to see the large hall filled to capacity. Almost 140 collectors and their wives took the opportunity to socialize. They enjoyed not only a superb meal but also the keynote lecture held by the speaker they had flown in from Germany.
The evening’s highlight was an auction sale. Its proceeds were planned to fund the congress. John Mowbray, founder and owner of New Zealand’s largest auction house for coins and stamps, was the auctioneer. And the collectors submitted their bids. They did indeed. Anyone who has ever witnessed how reluctantly this is done at charity auctions was speechless with amazement. It seemed that everybody was eager to bear his share of the costs. 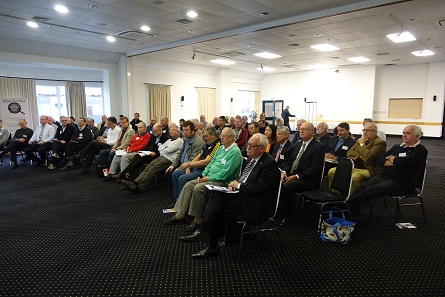 The attendees of the congress. Photo: UK.

The many guests of the gala evening were still present when the congress proper started the following morning. Unfortunately, the Governor General of New Zealand, Her Excellency the Right Honorable Dame Patsy Reddy wasn’t able to open the congress for health reasons. At least she had sent a message of greetings that was read out, before Robert Loosley, owner of Antiquarius, acted as proxy and spoke the official welcoming words. 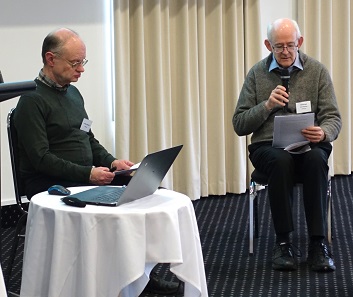 Dr. Mark Stocker, Curator for Historical International Art at the National Museum of New Zealand Te Papa Tongarewa in Wellington, presented his lecture in the form of an interview; David Galt on his right-hand side. Photo: UK.

20 speakers talked about coins, banknotes, orders and tokens from – of course – New Zealand. The first day was dominated by local numismatics. With only one exception: Even if Ellen Feingold couldn’t personally attend, she had sent a detailed synopsis of the debate revolving around women on US American coins. Her contribution was delivered by David Galt. 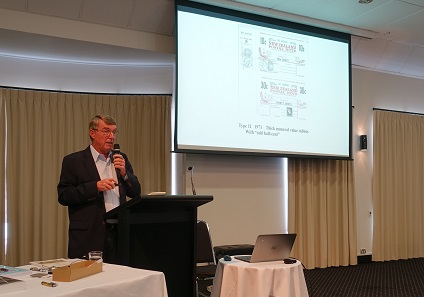 John Harwood, Florida, speaks about postal orders from New Zealand that may have temporarily circulated as bills. Photo: UK.

On the second day, it was the turn not just of antiquity but also of international numismatics. The ‘kiwis’ had specifically asked for a report on the current developments of the German Cultural Property Protection Act. They were shocked to learn how badly German coin collectors and coin dealers were blackened by the media in the debate on the new regulation. 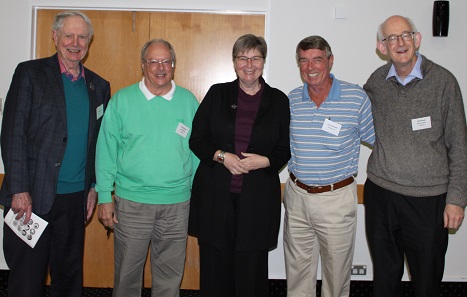 When the congress ended on Monday evening at 5.30 p.m., more than half the 140 participants were still present – on a working day, with many having to take leave. (It’s important to note that New Zealanders have considerable fewer holidays than an average European – but still a little bit more than somebody coming from America.)

That was a good sign! Not just to the organizers who had made every effort to make this event a success. Above all, it’s indicative of the interest New Zealand collectors take in numismatics. There was a real sense of community, from the conference‘s start to its finish. This was surely not the last congress the Numismatic Society of Auckland and the Royal Numismatic Society of New Zealand have organized!

This is the website of the Royal Numismatic Society of New Zealand.

Here you can find all numismatic societies of New Zealand.

And here you can read a press release on the conference.