August 15, 2013 – This year sees the 130th Anniversary of the Orient Express which was established in 1883 and to celebrate the anniversary of the luxurious mode of transport, Pobjoy Mint issues a new coin on behalf of the British Virgin Islands.

Originally operated by the Compagnie Internationale des Wagons-Lits, the Orient Express was a long distance train service which was one of the world’s most sumptuous and legendary passenger trains. Made famous in countless movies, TV shows and books by great writers like Agatha Christie, the Orient Express was surrounded by intrigue, romance and glamour and became the ultimate in extravagant travel.
The route and rolling stock changed many times during its operation but the city names most significantly associated with the Orient Express are Paris and Istanbul, the original start and end points of the timetabled service. 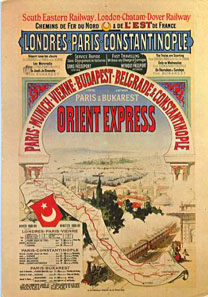 To celebrate the historic 130th Anniversary, this spectacular new coin features the original Orient Express steam train with Sacre Coeur, Paris and Hagia Sophia in Istanbul in the background, representing the end and start points. A map of the route is also shown indicating the main cities the train travelled through. The furled ribbon at the base of the coin also indicates the French and Turkish flags and the entire design is produced in the Art Nouveau style.

The obverse of the coin features an effigy of Her Majesty Queen Elizabeth II by Ian Rank-Broadley FRBS. Available in Cupro Nickel and Proof Sterling Silver, all coins are produced to the highest quality and the precious metal coins have been struck four times to produce a glorious mirror finish background with the design sculpted in striking relief.

To view other coins from Pobjoy Mint, please visit its website.

And if you would like to learn more about the history of the Orient Express, have a look at this website and its wealth of historical images.